Humility, Thy Name Is Limbaugh


This is so wondrously ironic and amusing that had it been proposed to the Onion, it would have been rejected as too farfetched.  On Friday, Rush Limbaugh remarked to a caller

Oh, well, in that sense, you're exactly right about that. There's way too little humility among people who have real power over us. You are exactly right. You know, a real leader has humility, is humble, and is not somebody who expects to have gratitude shown or appreciation shown to him or her. You're right, we've got a bunch of imperial people in politics today.

After the caller explained that Rush is a particularly humble person because "you've mentioned it all the time, talent on loan from God," Limbaugh agreed

Without God in your life, it is impossible to understand that there are things larger than yourself. And people who think that there's nothing larger than themselves are some of the toughest people to be around and live with. They're arrogant, they are condescending, and many of them, I'll guarantee, because they are missing that, are profoundly insecure, which is what they're trying to cover up. But you know something? I want to go back to your point about gratitude, and I want to thank you for that because I have it.

Gratitude, though, is similar to humility.  A person does not possess or express either by declaring he has it but by living it.   Only the previous day, the man who long has bragged about possessing "talent on loan from God," claimed his wife had asked him

"Why don't you write a book for kids? A series of books for kids, maybe -- see how the first one goes -- that sets the record straight on American history."

And so that is what has happened.  And what we have done, we have brought to life Rush Revere, our character at Two If By Tea.  And we have today the ability to announce to you a book that is aimed for everybody, but it's for kids, to learn the truth about the very early and beginning days of this country, but it is a book for everybody to buy.  Everybody has kids in school, and they're worried sick about what they're learning.  And some of you don't know what to do, how to counter what your kids are being taught, and so Rush Revere to the rescue here.

The book is Rush Revere and the Brave Pilgrims: Time-Travel Adventures with Exceptional Americans.

Amazon maintains the author "created the character of a fearless middle-school history teacher named Rush Revere, who travels back in time and experiences American history as it happens, in adventures with exceptional Americans. In this book, he is transported back to the deck of the Mayflower."

Characteristically, Rush cited to his admiring caller Democrats (of course) Elliot Spitzer and Anthony Weiner as particularly lacking in humility.  He forgot, somehow, to mention these guys (the first, from consortiumnews.com; the second an AP photo/J. Scott Applewhite via The Nation) from May 2, 2003: 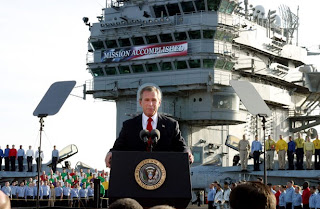 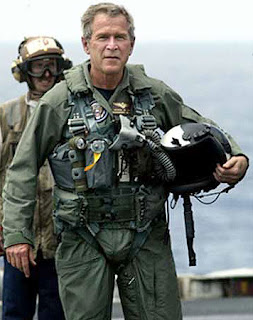 Of course, Rush Limbaugh probably believes George W. Bush was the epitome of humility. He wore a flight suit well, congratulated himself on a "mission accomplished," and spoke of God often.