Author and journalist Thomas Schaller has a few interesting statistics for Labor Day:

according to a cross-national study released earlier this year by the International Labor Organization, American workers are the most productive in the world. Based on the most recent data available for each country, workers in the United States on average produce $63,885 of wealth annually; compared to other industrialized countries of Europe, only Norway's workers produce more wealth per hour ($37.99 in U.S. dollars) than do American workers ($35.63.)

We already knew American workers are singularly productive, even though powerful economic interests and their allies avoid acknowledging it.   But Americans also work hard, with Schaller noting

Workers are getting little help from the federal government.  Today, Mike Elk, labor reporter for In These Times, is concluding a Summer of Solidarity tour drawing attention to issues of economic justice.  In an interview earlier this summer, he explained

in 2010, a lot of uranium workers at Honeywell’s Metropolis, Illinois, facility were locked out from their job for 14 months. It was a lockout that really drew some questions to the White House about which side they’re on. David Cote, CEO of Honeywell, is considered Obama’s closest ally in the business community. When Obama introduced the stimulus in January 2009, Cote gave a speech. Obama appointed Cote to the deficit commission, where he’s called for things like cutting social security and implementing chained CPI. During the lockout, Obama flew on Air Force One with Cote to India as part of an official state visit. Last year, I obtained internal confidential Honeywell documents stating that Honeywell’s relationship with the Obama Administration was crucial to breaking up union cohesion across the country. And what we’ve seen across the country are a number of lockouts and labor struggles at Honeywell plants across the country, at defense contractors and other federally regulated facilities, where the federal government could step in to stop the lockouts but don’t. Indeed, by not stepping in, they’re giving aid to them.

Elk sees the Honeywell situation as a metaphor "for what’s happened with this administration not sort of showing what side they’re on when it comes to workplace struggles."  Or maybe we do know what side he's on. Contrary to the masquerade as at least a semi-populist in his ascent to the Democratic presidential nomination, Obama has not negotiated labor (or consumer) modifications to the NAFTA.  He has promoted a Grand Bargain but not the Employee Free Choice Act. He is pursuing the Trans-Pacific Partnership Agreement, which has been described as "a worldwide corporate power grab of enormous proportions," and is the only President of the past four who has not signed a minimum wage increase into law.    Nor should we forget Rahm Emanuel, former chief-of-staff to President Obama, nor Obama taking a pass when unions were under assault by Wisconsin Governor Scott Walker, now a viable possibility for the 2016 GOP presidential nomination.

And then there is the increase in H-1B visas in the misleadingly named Border Security, Economic Opportunity and Immigration Modernization Act.  Passed by the Senate and (presumably) awaiting House action, it would increase the number of highly-educated workers brought in to lower salaries in the STEM sector.  On this Labor Day (cartoon below via franklycurious.com), most of the threat to workers comes from the right.  But not, sadly, all of it. 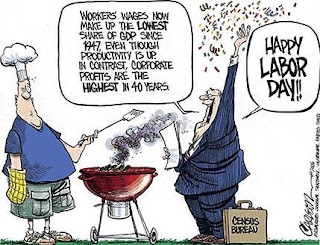