Pals To The End


There are few things better than having friends in high places.   Matt Katz of The Philadelphia Inquirer reported yesterday

Gov. Christie's plan to redirect $15 million in federal Sandy aid to another tragedy - the fire last week on the Seaside boardwalk - is vague on eligibility requirements, and is drawing criticism from both the left and the right.
Officials on Tuesday attributed the blaze to old and faulty electric wiring - under a building that housed a custard stand and a candy shop - that was exposed to sand and saltwater during the storm surge. But Ocean County Prosecutor Joseph Coronato said officials "will never know" if Sandy actually caused the fire.
So why is Sandy relief money being earmarked to rebuild burned structures - including, according to Christie, businesses unaffected by the storm?
Christie, with backing from the Obama administration, says the money is needed to help a community and tourism area that has faced two major disasters in less than a year.
"Getting financial assistance to fire-damaged businesses is a critical step to Seaside's economic recovery, and we're acting quickly to make that happen," Christie said in a statement over the weekend.
But a wide cross-section of groups opposes the move.
The state chapter of Americans for Prosperity, which is affiliated with the tea party, believes the state should not cover fire losses that cannot definitively be tied to Sandy. And left-leaning housing advocacy groups say funds should not be diverted to unrelated needs as long as displaced New Jerseyans are still on waiting lists for housing aid.
Under Christie's plan, it appears that businesses unaffected by Sandy would qualify for funds. And those business owners who have already received Sandy aid could be approved for a second check.
But in the lead-up to a special meeting Wednesday, in which the state Economic Development Authority is expected to formally reallocate the money, Christie administration officials contradicted themselves on those very eligibility requirements.
Documents on the state website specify that only Sandy-affected businesses can get money. A spokeswoman for the Department of Community Affairs, Lisa Ryan, said businesses affected by both Sandy and the fire can get new loans and grants to rebuild.
Meanwhile, the governor's office, in a statement released Saturday, offered yet another view of the requirements: "This offer will be extended regardless of whether a business was affected by Superstorm Sandy."
The money will come from a $100 million Sandy loan program and a $260 million grant program.
In addition to those programs, Ryan said funds from the $75 million Sandy Neighborhood and Community Revitalization Program, intended for long-term economic revitalization projects, will pay for demolition and debris removal of damaged public and private structures, boardwalk rebuilding, and a redevelopment plan in Seaside Park and Seaside Heights.
The fire destroyed about four blocks of boardwalk, some of which had been repaired and rebuilt with funds from a $60 billion federal Sandy aid package, about a third of which was earmarked for New Jersey.
Christie had castigated congressional leaders for holding up the money after conservative Republicans complained of wasteful spending in the package.
At the time, Americans for Prosperity opposed the aid package. Now it has new concerns. Spokesman Mike Proto said that businesses affected by the fire should "not rely on Sandy relief aid intended for rebuilding areas damaged by last year's storm."
Leaders of two housing advocacy groups found themselves in the unlikely position of agreeing.
"Gov. Christie shouldn't be treating Sandy funds like they are his to give out to whomever he feels is most deserving," said Staci Berger, executive director of the Housing and Community Development Network of New Jersey, in an e-mail. "There are families struggling to get and keep a roof over their heads who need this help now."
The Fair Share Housing Center, an affordable housing advocacy agency that has acted as something of a watchdog over the administration's use of the money, said the public should have a chance to weigh in on the proposed reallocation of funds.
"If Gov. Christie can move this quickly for the businesses on the boardwalks, why can't he do the same for the tens of thousands of people who are still not yet back home?" asked Adam Gordon, a lawyer with Fair Share.
Why, indeed?  It takes more than a failed governor to stand between federal money, from taxes collected by people throughout the nation, and a family whose home was destroyed by Hurricane Sandy. The Inquirer article contines
The Obama administration, which must approve the way the dollars are used, is supporting Christie's move.
Spokesman Brian Sullivan of the Housing and Urban Development Department, which oversees much of the money, said state and federal officials discussed the issue and "we've informed the state that to the degree that these fires have exacerbated their Sandy recovery, then using [Sandy] recovery funds is appropriate."
HUD Secretary Shaun Donovan has taken the cue from his boss, who came back to the New Jersey shore with a gubernatorial contest looming.  The first photograph was taken after the hurricane, the second and the third the day after Memorial Day, 2013 because, well, there is never a bad day for a photo-op with a Repub governor running for re-election. 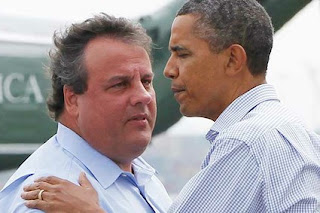 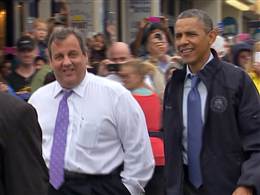 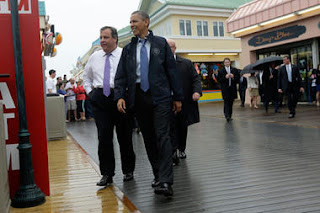 The President is smiling in the latter two photographs, from late May of this year. Perhaps before returning to New Jersey, he already had seen the polls showing Christie likely to defeat his Democratic challenger, state Senator Barbara Buono- almost entirely because of hurricanes Irene and Sandy.... whom Barack Obama has not endorsed and will not campaign for.

Not the Moron He Seems to Be

According to Urban Dictionary , this phrase "was once a compliment turned insult. Meaning to be an insult to those who believe they a...