Who Insulted The Intelligence Of Americans?

Alex Pareene is spot-on in his analysis of Vladimir Putin's scandalous op-ed in The New York Times,  an example "of good old-fashioned utterly amoral American capitalism."  It was placed by the public relations firm Ketcham, which has planted columns in various media outlets spinning Moscow's positions.  It has also worked on behalf of Bush II's Medicare prescription drug program and No Child Left Behind, and most recently on behalf of the Obama Administration.  "Anything for a buck" appears to be the firm's guiding principle.

Most of Putin's claims, Pareene points out, are accurate, though mostly "he is clearly enjoying his ability to just repeatedly poke America with sticks."   And apparently, several American politicians are inadvertently giving the Russian president the satisfaction he craves.

Senator John McCain's words are particularly intriguing.  He tweeted "Putin's NYT op-ed is an insult to the intelligence of every American."

Perhaps these old guys have to stop tweeting, for it tempts them to say stupid things.  Or maybe they should tweet away, given that a tweet seems to be an excuse for saying stupid things.  No one, for instance, has stopped to remind Senator McCain of this character: 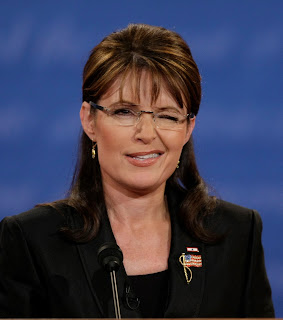 That would be Sarah Palin, who without John McCain's determination to place her a heartbeat from the presidency would be just another hunter somewhere in the Alaskan wilderness.  She never would have become a Fox News pundit, and never would we have heard her say:

-"Elizabeth Warren has almost confessed to her Marxist views";
-"advocating a boycott of Chick-Fil-A "has a chilling effect on our First Amendment rights";
-"right now, the inner-circle that he has are some Chicago thugs";
-President Obama "is manipulating the domestic supply of energy," which  is leaving us "enslaved to foreign countries and  their sources of energy";
-"Obama seems to want to return to the days before the Civil War" when people were not considered equal.


And those, from Media Matters, were uttered only since Palin's ticket was defeated and she later resigned as governor of Alaska.  As John McCain's chosen V.P. candidate, when she arguably had more credibility than she does now, 59 percent of voters believed she was not qualified to be vice-president.  But the fellow who could have turned her down in favor of a credible figure says Vladimir Putin's statements are "an insult to the intelligence of every American."

Yes, Vladimir Putin is a hypocrite. So what does that make John McCain?