Something Smells, And Not Just In Texas

Did you hear the one about the manure in the Statehouse in Austin?  While the threat to Damascus from American missiles was being ratcheted up, Slate's Amanda Marcotte explained

One of the lowest moments during Texas's anti-abortionpalooza back in July was when the Texas Department of Public Safety started confiscating tampons and maxi pads from protesters entering the capitol building. Pro-choice protesters saw it as an overt attempt to humiliate them for being female, but the official excuse was there were concerns about people throwing these items at the state senators. The DPS and government officials like Lt. Gov. David Dewhurst justified the actions by claiming that pro-choicers were trying to smuggle in jars and bags of feces and excrement, items you would only be carrying if throwing them were your intention. Unsurprisingly, this evocative story about dirty, uncivilized feminists blew up all over the right wing media...

After putting off requests by journalists for proof of these reported 18 jars of feces that the DPS supposedly found, law enforcement finally released a 144-page report chronicling the incident. The Texas Tribunehas published it, and it's not looking good for the DPS. There was no official report of feces-filled jars filed, and when director of the DPS Steve McCraw asked for photographic evidence—ostensibly to prove that officers weren't just telling fish tales to make pro-choicers look bad—he was told that the women who were supposedly carrying the poop were simply "directed to throw away prohibited items before entering the gallery."...

While the DPS officers were apparently too busy to chronicle the 18 jars of feces they claim to have witnessed, other confiscated items were photographed: "a bottle of acrylic paint and a small jar" and "three bricks collected in the Capitol extension."

Watch a sonogram of a 15-week baby, and they have movements that are purposeful,” Rep. Michael Burgess, a former obstetrician, said Tuesday.

“They stroke their face. If they’re a male baby, they may have their hand between their legs. If they feel pleasure, why is it so hard to believe that they could feel pain...?

Not true, Dr. Lisa Perriera told ABC News, because "We don't think (connections between nerves) start to form until between 23 and 30 weeks gestation."

How about the one about breast cancer?  Sarah Moffat (from whose article the cartoon below comes) summarizes

Then there is this golden oldie, which would seem intuitive, given that serious regret after being accused of having murdered a human being would seem reasonable.  A so-called "informed consent" law in South Dakota requires doctors to read to women requesting abortions a formal script warning them they will have "increased risk of suicide ideation and suicide."   But as Stephanie Pappas from LiveScience noted last year

High-quality studies on the topic, however, suggest that an elective abortion does not increase the risk for mental health problems. In 2008 an American Psychological Association panel surveyed more than 150 studies on abortion and mental illness and confirmed that while some women experience sadness and grief after an abortion, there is no increased risk of mental health problems for these women.

Science, however, has little impact upon pro-life activists.  If it did, the movement would not have long ignored that for the fetus

- approximately 20 weeks in, the cell structure of the fetal brain begins to resemble that of a newborn-
-from the 22nd to the 24th week consciousness begins to form from;
- at about 23 weeks the lungs become able to function;
- early in the third trimester brain activity begins;
- by 32 weeks, the brain pattern resembles that of a full-born baby;
- at approximately 32 weeks, breathing begins. 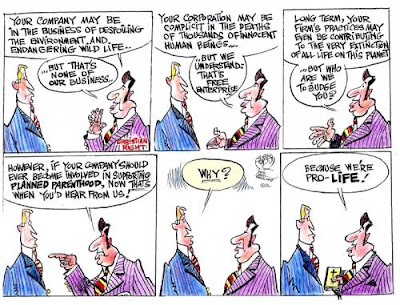 Email ThisBlogThis!Share to TwitterShare to FacebookShare to Pinterest
Labels: Abortion