After All These Years,He's Still John Ellis Bush

It seems John Ellis Bush, whom the mainstream media is all giddy over because he does not hate gay people, is merely just another Republican. Bush has written

Sorry. It turns out that Jeb Bush is just a typical snotty, rich right winger scolding people who have the nerve to complain about being treated like doormats and relegated to second class citizen status in the land of freedom and opportunity. Never mind.

I don’t think people need to be discriminated against because they don’t share my belief on this, and if people love their children with all their heart and soul and that’s what they do and that’s how they organize their life that should be held up as examples for others to follow because we need it. We desperately need it and that can take all sorts of forms, it doesn’t have to take the one that I think should be sanctioned under law.

At that time, John Ellis Bush apparently believed a man shouldn't be allowed to marry a man, nor a woman marry a woman, but should be viewed as role models if he/she  does.   Now, if we are to believe his most recent statements, he believes people who support same-sex marriage should not be drawn and quartered, as long as we understand they don't believe in religious liberty or the sacrament of marriage.

We live in a democracy, and regardless of our disagreements, we have to respect the rule of law. I hope that we can show respect for the good people on all sides of the gay and lesbian marriage issue – including couples making lifetime commitments to each other who are seeking greater legal protections and those of us who believe marriage is a sacrament and want to safeguard religious liberty.

At first reading, that is striking as muddled thinking. But it is much worse.

Though John Ellis Bush's concept of marriage as a sacrament is held by many people (and the Roman Catholic Church), a point of view more warm and reassuring than Biblical. it is not held by all Christians, inasmuch as reformed Christianity recognizes only two sacraments, communion and baptism (neither necessary for salvation). Thus, John Ellis Bush (AP photo below by J. Pat Carter via Talking Points Memo), by inferring that "those who believe marriage is a sacrament" oppose same-sex marriage, implies that the universe of opponents is identical to people who believe marriage is a sacrament.

Evangelical Protestants, most of whom oppose gay marriage while believing marriage is not a sacrament, should be outraged. They will not be, however, not only because John Ellis Bush appears to be opposed to such unions, but especially because he has portrayed the right's opponents as hating religious liberty. It is a slick move, born of a failure to understand the variety of Christian belief while nonetheless tarring liberals with opposing religious liberty. Conveniently, that falls right in line with the victimization phobia of the Christian right.

And John Ellis Bush is still a snotty, rich right-winger. 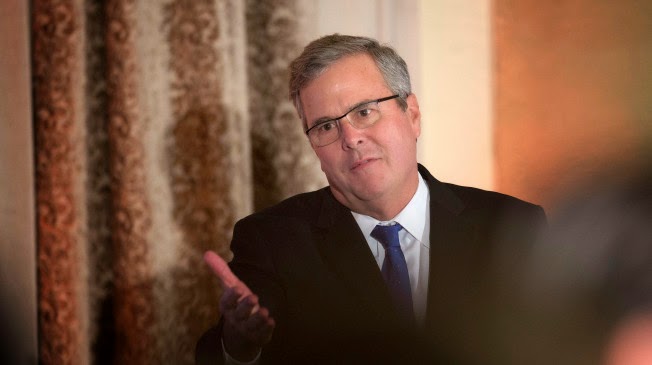