It really isn't fair. It isn't fair to criticize Illinois' Mark Kirk, who is more sensible than many of the others- oh, say 54- Republicans in the U.S. Senate.

But when last week, in an interview with a trade publication in the context of Keystone XL, Kirk date state

We had the previous warming period, which was called the global optimum, and the best way to talk about that is when Leif Erickson went west from his home, he discovered a landmass that he called Greenland, because it was," Kirk said after a Senate Republicans' lunch to discuss legislation to build the Keystone Pipeline. "And that was called the global optimum, because the planet was much warmer. By calling Greenland 'green land,' we know that the climate has been changing pretty regularly within recorded memory.

It would appear this large land mass and country was given its name by early Scandinavian settlers, including Erik the Red (not a Communist, nor a Republican), who figured that name would attract additional settlers. It was  understandably a tough sell because

Greenland is famous for its massive glaciers, but the region was relatively free of ice until about 2.7 million years ago, according to a new study. Before then, the Northern Hemisphere had been mostly ice-free for more than 500 million years, the researchers said.

"Our work was motivated by the question of why extensive glaciations of Greenland started only during the past few million years," the researchers wrote in the study.

Alright, then. Greenland was really green 2.7 million years ago, which would be slightly unsettling to the young earth creationists vying with the Big Money Boyz for  control of the G.O.P.  But 2,697,886 B.C. was a really long time ago.

Still, it was inaccurate for the Environmental Defense Fund in a statement to charge "A forward-thinking environmental moderate back when he served in the House, Kirk's record has badly deteriorated in the Senate.... And this week, he sounded like Rush Limbaugh." At least Kirk did not contend, as Limbaugh did last July, "the models are the only thing we've that says there's global warming. There is no data. There is no empirical data. There's zilch, zero, nada. It's all based on model forecasts for 2100, for 2050, for 2075. This is one of the greatest hoaxes ever pulled on people."

The eleven warmest years in the last 134 years have occurred since 1997 (graph below from UK's Met Office via Think Progress). This past year marked the 38th consecutive year that the annual global land and water temperature has been above average. Darn that lack of empirical data.

The GOP is planning a major assault on the rights (via Social Security) of the elderly, of women (via reproductive rights), and on the environment, via the effort through Keystone XL to keep supplies up in Communist China.  Your mileage may vary, but Mark Kirk is easily one of the best, most reasonable 3 or 4 members of the Republican caucus in the U.S. Senate.  That is not a good sign. 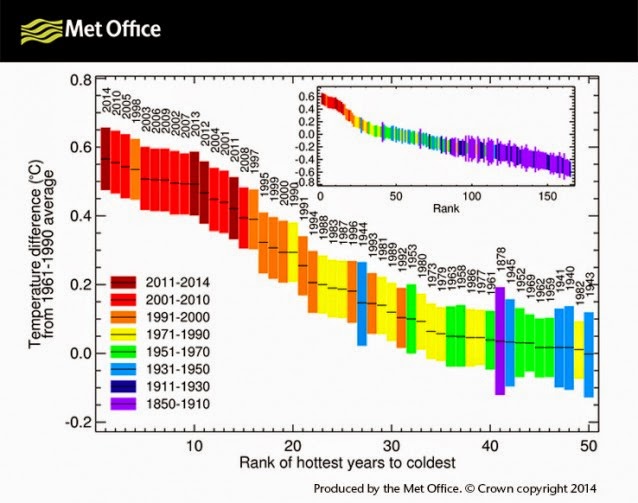