It’s not a slowdown — it’s a virtual work stoppage.
NYPD traffic tickets and summonses for minor offenses have dropped off by a staggering 94 percent following the execution of two cops — as officers feel betrayed by the mayor and fear for their safety, The Post has learned......
Angry union leaders have ordered drastic measures for their members since the Dec. 20 assassination of two NYPD cops in a patrol car, including that two units respond to every call.
It has helped contribute to a nose dive in low-level policing, with overall arrests down 66 percent for the week starting Dec. 22 compared with the same period in 2013, stats show.
Citations for traffic violations fell by 94 percent, from 10,069 to 587, during that time frame.
Summonses for low-level offenses like public drinking and urination also plunged 94 percent — from 4,831 to 300.
Even parking violations are way down, dropping by 92 percent, from 14,699 to 1,241.
Drug arrests by cops assigned to the NYPD’s Organized Crime Control Bureau — which are part of the overall number — dropped by 84 percent, from 382 to 63.
The mayor apparently was alarmed police had begun issuing fewer parking and driving citations, looking the other way upon seeing citizens drinking and urinating, and declining to arrest citizens for possessing marijuana, thus imperiling the broken windows approach to delinquency. So the mayor agreed to a meeting with representatives of the police unions. The president of the Sergeants Benevolent Association even took to right-wing television, Fox News, to remark "I think the mayor needs to humble himself."  On Tuesday
An unapologetic Mayor de Blasio spent more than two hours with NYPD union leaders to “allegedly” repair their fractured relationship — but insiders said he left them cold by offering no solutions, and ­often sat in total silence.
Hizzoner never walked back his divisive comments following a grand jury’s decision not to indict the Eric Garner chokehold cop. He also didn’t express any remorse for allowing police-hating protesters to run amok in the city, sources said...
One union leader accused de Blasio of personally making “inflammatory” statements following the grand-jury ruling, including that the mayor had taught his biracial son, Dante, about the “dangers” posed by cops, sources said.
But de Blasio offered no apology for that revelation, his handling of the protests or his use of the word “allegedly” to describe a Dec. 13 ­attack on two NYPD lieutenants during a demonstration that spilled onto the Brooklyn Bridge.
Sources said Lynch also confronted de Blasio about letters that Lynch said were being circulated by the administration to condemn Lynch and the PBA for disrespecting de Blasio.
After the meeting, Lynch said nothing had been accomplished.
“There were a number of discussions, especially about the safety issues members face. There was no resolve,” Lynch said.
“And our thought here today is that actions speak louder than words and time will tell.”
The head of the sergeants union, Ed Mullins, said he was “somewhat confused as to the outcome of the meeting.”
Detectives’ Endowment Association President Mike Palladino lectured the mayor on needing to improve his p.r. skills, a source said.
Confusion set in as the police representatives began to realize the mayor of New York City, faced with a work slowdown by his employees, was not the President of the United States, cowering before Republicans in the House of Representatives and the US Senate.  Targeted by police unions, the New York Post, and Fox News, DeBlasio has to face off special interests similar to the ones which in the earl 1980s brought down New York mayor David Dinkins
If he's still committed to broken windows policing, the Mayor could go to the public and charge the cops with imperiling public safety. Better, he could call their bluff by announcing he won't interfere with the work slowdown and congratulate law enforcement for prioritizing threats to the community.. Then it would be: your move, guys. 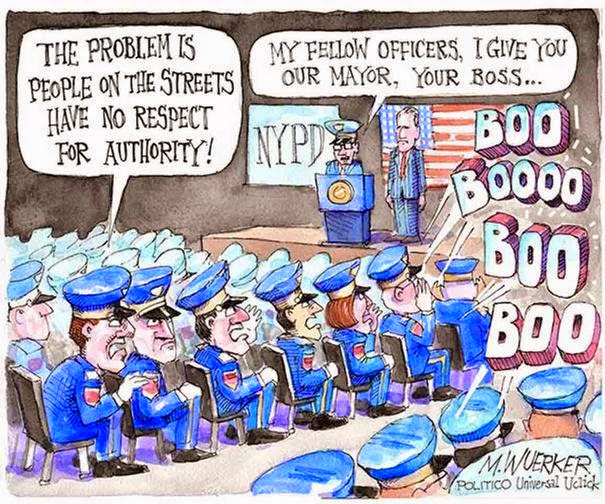