By now, we all know the New England Patriots did not know the footballs were inflated.   Owner Robert Kraft says so (and the NFL better apologize because his feelings are hurt).   Head coach Bill Bellicheat says so.  Quarterback Tom Brady, who- with Peyton Manning- lobbied for the procedural change which made underinflation possible, says so. (Brady, whom many people claim is the greatest quarterback in NFL history, allegedly was so stunningly stupid he didn't realize the balls he handled on every play were soft.) Following the quarterback's news conference, CNN reported

Brady said he picked the footballs he wanted to use five hours before the game, feeling the laces and the leather but not paying attention to the inflation level. The NFL mandates balls should be 12.5-13.5 psi.

Brady said he didn't touch the balls again until the game began. The referees inspect footballs about two hours before kickoff and deliver them to "ball attendants" who take them to the sidelines, according to NFL rules. The Patriots' opponent, the Indianapolis Colts, provided their own footballs.

Brady also said he couldn't tell any difference between the balls in the first and second halves.

This is the same guy who has won three Super Bowls.  Unfortunately, even the quarterback- who would be more likely to have known what was going on than would the head coach- never would have explicitly told the equipment manager "deflate the footballs." The latter could not have but known what the star quarterback wanted, and it was his responsibility to see that he got it- with, of course, the fellow who (with his head coach) has been by far most responsible for those championships.

The quarterback smart enough to have won as many games as he has with footballs as he wanted them was smart enough to deny, deny, deny, thus sending to individuals who might be interviewed in the NFL investigation two messages: a) if you choose to deny, nothing I say when I'm questioned after the Super Bowl will contradict your denial; and b) if you dime me out, it will be your word against the guy arguably as responsible as anyone for the success of the NFL over the past 10-15 years. (Then, practically no one would believe Brady. It might not matter.)

If Tom Terrific did not realize footballs have been deflated- and even if it hasn't helped him directly- it still has aided his team- hence his record, his reputation, and his stake in being considered the greatest ever at football's most important position.   While making no conclusions- it's not his purpose- licensed professional engineer Warren Sharp of sharpfootballanalytics.com explains Licensed professional engineer, Warren Sharp of Sharp Football Analytics offers no conclusions or value judgements and does not consider intent or culpability.   But, displaying a chart comparing all NFL teams, he explains it

is apparent, the Patriots are the only outdoor NFL team the last 25 years to average 70 plays/fumble or better, and they did it from 2007-2014 (four, five year periods).  Its simply uncanny, as the statistics above similarly showed.

Over the last 25 years, indoor teams averaged 43 plays/fumble (in all games they played that season, regardless of site, understanding that half their games would be played indoor sans-weather).

Next, lets look only at the current 5 year period:

For indoor teams, the average was 55 plays/fumble.

For outdoor teams, excluding the Patriots, the average was 46 plays/fumble (9 fewer).

The Patriots averaged 73 plays/fumble, almost 60% MORE than outdoor teams, and almost 50% MORE than the league average the past 5 years.

Since we now can clearly in the data, both near term and long term, that dome-based teams (who play at least 8 games out of the elements) have an advantage in the fumble department, we can exclude them from comparisons to the Patriots.


If we do, I can produce a chart identical to the one at the very top which looked ONLY at fumbles lost.  This one looks at ALL fumbles, whether lost or recovered.  I think the point still remains (Graph, difficult to read, includes each NFL team; Patriots at far right- MSL): 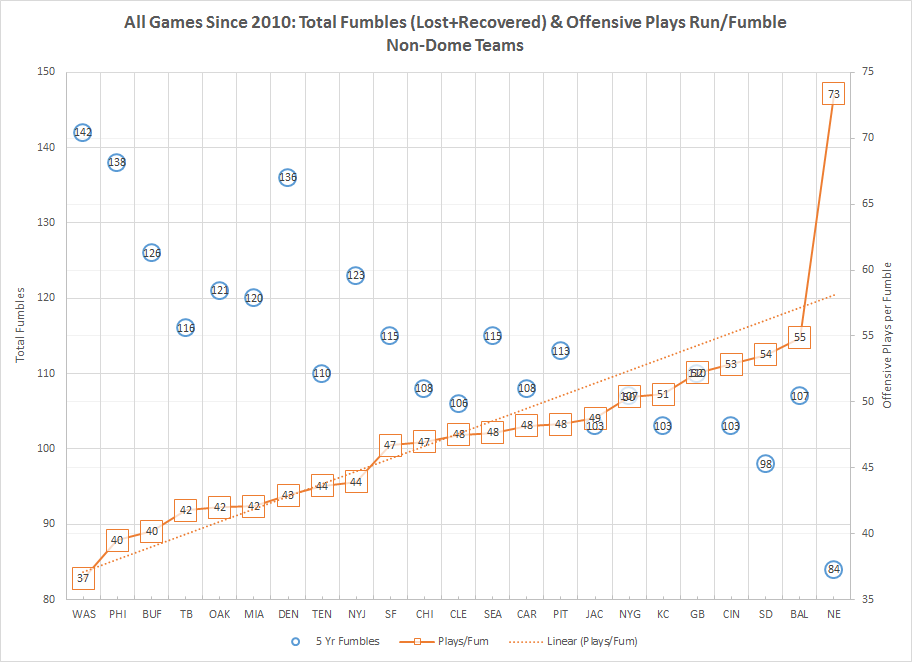 If this chart looks nearly identical, it should.  The Patriots are so “off the map” when it comes to either fumbles or only fumbles lost.  As mentioned earlier:  this is an extremely abnormal occurrence and is NOT simply random fluctuation.


You can't blame the New England Traitors owner for trying to intimidate commissioner Roger Goodell, who is "Robert Kraft's pegboy" and who as a bully himself, probably can be bullied. The direction of the league's investigation, let alone its conclusions, is still up for modification.  But the notion that New England hasn't been cheating in this manner for a significant time is borderline farcical.