It was a State of the Union address which, like all State of the Union addresses, roamed from topic to topic, in this case including  job training, community college, paid maternity leave, health care (these and others presumably constituting "middle class economics"), Afghanistan, Iran, the new Cuba policy. (State of the Union messages are the only speeches that, were they not routine and ceremonial, invariably would be described as "rambling," not unlike some of the posts here.)

One of the other subjects, buried as these days it can be, was crime/punishment, about which the President maintained

We may have different takes on the events of Ferguson and New York. But surely we can understand a father who fears his son can't walk home without being harassed. Surely we can understand the wife who won't rest until the police officer she married walks through the front door at the end of his shift. Surely we can agree it's a good thing that for the first time in 40 years, the crime rate and the incarceration rate have come down together, and use that as a starting point for Democrats and Republicans, community leaders and law enforcement, to reform America's criminal justice system so that it protects and serves us all.

"We may have different takes on the events of Ferguson and New York." In mentioning Ferguson and New York, this was, first, a nod and a wink to the matter of race. Primarily, though, it was yet another effort at downplaying an issue Obama has spent his entire presidency trying to avoid, both so that attention might be focused on concrete proposals and because of his never-ending, tiresome and thoroughly naive, focus on bipartisanship and comity.

A better politics is one where we appeal to each other's basic decency instead of our bases fears. It is the greatest irony of this presidency that a chief executive, stating "I want them to grow up in a country that shows the world what we still know to be true: that we are still more than a collection of red states and blue states; that we are the United States of America" (echoing his most important speech) has presided over a nation ever more ideologically and functionally split. Thank you, GOP.

The President's focus on coming together was reflected in his interest in a "starting point for Democrats and Republicans, community leaders and law enforcement, to reform America's criminal justice system." 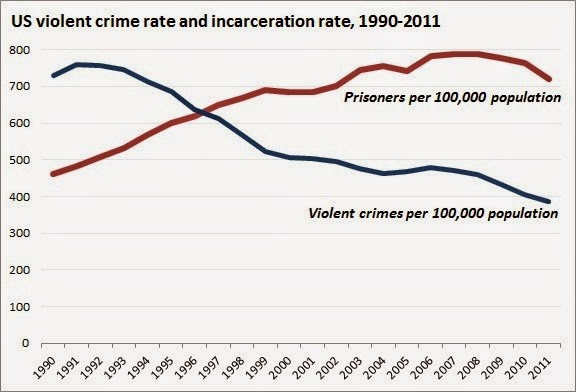 As a response to the exploding crime rate (concomitant with the crack "epidemic") and resultant public fear in the 1980s and early 1990s, states had enacted "three strikes you're out" and other punitive policies, incarceration rates soared as the incidence of crime fell. The thrust of the statement "the crime rate and the incarceration rate have come down together" is true only of late or, as Obama put it, "for the first time in 40 years."

It is unlikely that harsh punishment was the primary factor in the reduction of crime beginning, roughly from Bill Clinton's inauguration (a delicious coincidence which, of course, Barack Obama ignored). However, contrary to this article's implication (rebuttal upcoming in this space), it probably played a role.  Undeniably, crime soared, government responded by locking up offenders, and crime came down.

The crime rate has continued to decline while many states have paused their lock 'em up philosophy the past few years, too short a period to rule out serendipity. So when the President notes "for the first time in 40 years, the crime rate and the incarceration rate have come down together," he is accurate. But if we consider the trend of only the past few years while ignoring the larger pattern, we will jump to the wrong conclusion and implement remedies likely to be seriously flawed.