Don't Confuse What I Think With What I Believe

“I’m just not very good at bullshitting,” Axelrod reports Obama telling him after a 2008 campaign event in which the then-candidate discussed his opposition to same-sex marriage. At the time, Obama said he was in favor of civil unions.

“Opposition to gay marriage was particularly strong in the black church, and as he ran for higher office, he grudgingly accepted the counsel of more pragmatic folks like me, and modified his position to support civil unions rather than marriage, which he would term a ‘sacred union,’” Axelrod explains in the book.

Obama shifted his public stance only after Vice President Biden came out in support of same-sex marriage in a May 2012 appearance on NBC’s “Meet the Press.”

“If Obama’s views were ‘evolving’ publicly, they were fully evolved behind closed doors,” Axelrod writes.

For people on the left or on the right, none of this comes as a surprise. During the 2008 campaign and in the early part (before Biden boxed him into a corner) of the 2012 campaign, practically no one outside of the mainstream media took Barack Obama seriously when he said he was opposed to same-sex marriage.  Now, the practice is legal in 37 states and soon to be approved nationwide by the judiciary, assuming Chief Justice Roberts doesn't find some bizarre way to split the baby.

For most of his first term, Obama simply lied about whether he thought gay people deserve equal rights, and told the truth only once he felt he could withstand any political blowback. It seems the president’s evolution on the topic had less to do with his private views on gay marriage and more to do with his readings of public opinion polls.

Clearly, and when a lie is revealed, further discussion are unlikely to help the fabricator. Nevertheless, in an interview conducted by Ben Smith on Tuesday

Obama told BuzzFeed News that his own reversals on same-sex marriage — he supported it in a questionnaire he filled out in 1996, opposed it in the U.S. Senate and as president, and then “evolved” toward supporting it again — had taught him a lesson about politics.

“These are the kinds of things you learn as you move forward in public life: that sometimes you can’t split the difference,” Obama said. “That sometimes you just have to be very clear that this is what’s right.”

disputed, however, the contention of his former top political adviser, David Axelrod, that he had misled voters in 2008 when he opposed marriage equality. Axelrod wrote in his new memoir that Obama “modified” his position because his aides worried about alienating black Christian leaders, and then complained that he didn’t like “bullshitting” voters about it.

“I think David is mixing up my personal feelings with my position on the issue,” Obama said. “I always felt that same-sex couples should be able to enjoy the same rights, legally, as anybody else, and so it was frustrating to me not to, I think, be able to square that with what were a whole bunch of religious sensitivities out there.”

We now learn that Obama believes personal feelings have nothing to do with his stated positions, given that "David is mixing up my personal feelings with my position on the issue."  The man who once asserted it was only "the pundits (who) like to slice and dice our country into red states and blue states" became concerned because of "a whole bunch of religious sensitivities out there."

The President's phraseology is reminiscent of the days when people referred to minorities as "them."  There were no longer Americans with a different view, but "a whole bunch out there" opposing same-sex marriage only because of "religious sensitivities."  Not religious faith or religious belief- but religious "sensitivities."  Buck up, you un-evolved Cro-Magnons!

We all know now what most of us knew then: Barack Obama merely was trying to curb the impact of a wedge issue so that his opponents wouldn't exploit in a campaign (cartoon by Watson, St. Louis Post-Dispatch).  It's a tactic politicians routinely employ, though few try to rationalize it in such a patronizing fashion. 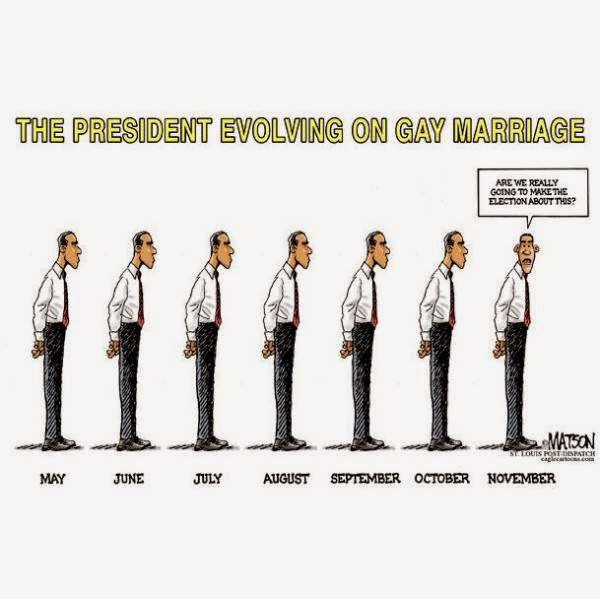