Good Work If You Can Get It


Charles P. Pierce, the most colorful progressive political blogger in the nation, calls Politico "Tiger Beat on the Potomac" because it

is a content-producing machine. It is a brand that runs in and of itself. It has a Web site and a magazine. It produces its own videos. It conducts policy forums for which it sucks down corporate sponsorships. (More about those in a moment.) As a news operation, it’s half gossip rag and half tip sheet. As the former, it’s not as good as the National Enquirer, and as the latter, it’s way up the track, just behind the Daily Racing Form.

Though a font of Washington Wisdom, Politico does produce some fodder for blogs, in part because of its superficiality. And once in a while, one of its posts or articles is worthwhile. Today, we can read two pieces about Mitt Romney's decision to forego a 2016 run, "Mitt had the heart, but not the guts" by Roger Simon and "The Death of the Three-Time Candidate" by Josh Zeitz.  One of these is spot-on, the other nearly spot-off.

Running for president is a grueling test, a meat grinder. And why shouldn’t it be? The presidency is a tough job, and it demands a tough test to weed out those without the stamina and strength to perform in it.

So 21 days after sticking his toe in the water, Romney withdrew it.

“I am convinced that we could win the nomination,” he told supporters in a conference call, “but fully realize it would have been a difficult test and a hard fight.”

He got some credit from Republicans for dropping out. But some Democrats crowed.
“Congratulations to Mitt Romney for finally saying something the American people want to hear,” John Dingell, a former congressman from Michigan, tweeted.

Mitt Romney made the right decision. Why should he want difficult tests and hard fights?

Running for president is a trial by combat. You can’t get there by riding in a car elevator. 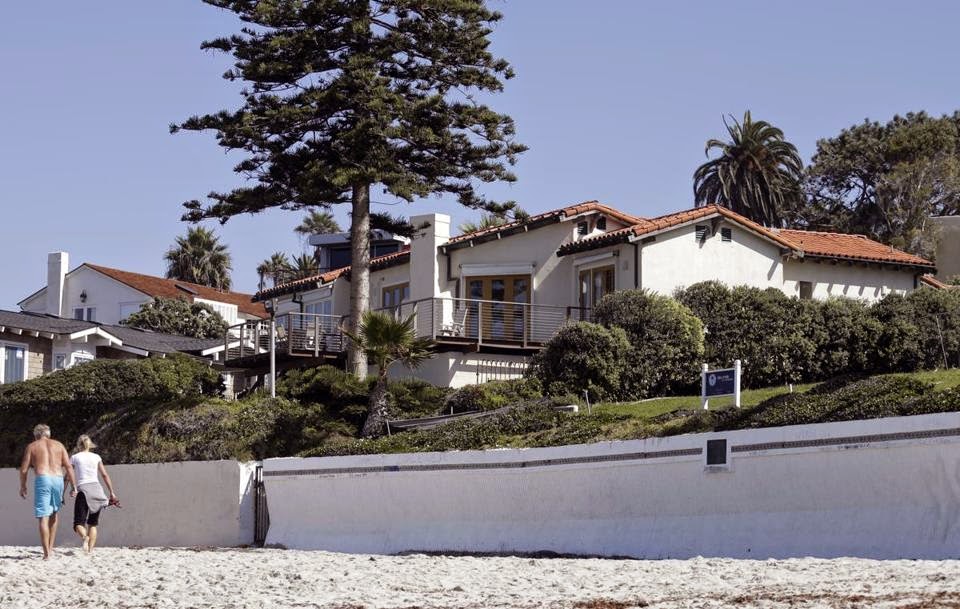 (Photo above is of the car elevator-house, in San Diego, by Gregory Bull/AP.)

Zeitz believes it would have been much tougher than a difficult test and hard fight. He argues

Richard Nixon and Thomas Dewey, Hubert Humphrey and Adlai Stevenson, William Jennings Bryan and Henry Clay—all could run, and run again, and run again, because they ran in an era when politics was a tightly held concern. To be sure, political campaigns since the Age of Jackson were great public spectacles. They were designed to engage, entertain and enliven the party faithful. But ordinary citizens held little sway over who got nominated, and formidable party machines could be counted on to mobilize voters regardless of who held the standard.

That system held up for a surprisingly long time. Only in the past 40 years has the presidential nomination system become truly democratic. That’s a good thing. As our country has grown more diverse and inclusive, so should its politics. Yet the system has also become much more celebrity-driven. It is arguably the longest-running nighttime soap opera on TV. Its first episode ran in the summer of 1968, and it’s been airing regularly since. That might not be a good thing. Writers like Hunter Thompson realized early that modern candidates were in danger of becoming pop culture commodities. As with any market for a commodity, success breeds success, and failure creates obsolescence.

Mitt Romney commanded an unparalleled fundraising base. Having lived through two national campaigns, he was in most ways a far more credible and tested candidate than his primary rivals. But the narrative was slipping away from him. The teaser for tomorrow’s episode strongly hinted that he couldn’t possibly run again.

Once upon a time, 10 GOP state chairmen could have converged in a smoke-filled room and let Romney take another turn at bat. Something in him understood that there are no more Henry Clays. There are only Harold Stassens. His was a sober but not altogether incorrect calculation. The only dignity was in bowing out.

As history, this is a good lesson. As political behavioralism, it's way off base.  Romney could have run, especially if he had the "unparalleled fundraising base" Zeitz attributes to the former governor. And with no commanding favorite (John Ellis Bush?- please)- unlike in the Democratic Party- Romney had a reasonable chance of earning the nomination by gaining some support because he was the guy who gamely took on executive order issuing, free phone giving, socialist health care creating, america dividing Barack H. Obama.

If he had won the nomination, all bets taken would be off. Twenty-one months out, it looks like the Democratic nominee, presumably Hillary Clinton, will be elected. But things change swiftly in American politics.  The Democratic incumbent had a 49% approval rating a few weeks ago according to a Gallup poll taken 1/19/15-1/25/15.  Two-and-a-half months earlier, when President Obama's popularity would have helped Democrats in congressional races, it stood at 40%.   Mitt Romney might have found in autumn of 2016 a favorable terrain to defeat Mrs. Clinton.

It wouldn't have been easy for Romney to get the nomination. He would have had to compete for funds from John Ellis Bush, who is a little like Romney, but pleases the corporatists with his support of expanding the labor pool (by comprehensive immigration reform). But Romney has been through this before, fairly recently; Bush has been out of the game for quite some time, and will find that running for president is not the cakewalk he may think it is.

So there was no particular "dignity" in "bowing out."  There was only a billionaire who figured he shouldn't have to work so hard to get himself a job which would pay him only a small fraction of what he could make staying home and doing nothing.