In court, one is asked to swear, or to swear or affirm, to tell the truth, the whole truth, and nothing but the truth. Slate's Jamelle Bouie tells the truth and nothing but the truth, though not the whole truth, which is far more than almost anyone will tell about Rudy Giuliani's recent loathsome comments about President Obama (photo illustration below entitled "a little off: Rudy Giuliani," by Slate; photo by Rob Kim/Getty Images). Bouie writes

On Wednesday, Rudy Giuliani spoke to an audience of businesspeople, conservative elites, and Wisconsin Gov. Scott Walker. He made news.

To Politico’s credit, this is a generous summary of Giuliani’s remarks, which in reality glowed with aggrievement and disdain. “I do not believe that the president loves America. He doesn’t love you. And he doesn’t love me. He wasn’t brought up the way you were brought up and I was brought up through love of this country.”

There’s no need to litigate this charge;outside of campy political thrillers, no one devotes his or her adult life to national politics—or the presidency, for that matter—without an outsized patriotism and belief in the basic worth of the United States. But if we’re feeling generous, we can say that in the course of his rant, Giuliani touched on a real difference between Obama’s brand of national exceptionalism and the kind we tend to see from America’s presidents.

Take his remarks after the initial temper tantrum. “[W]ith all our flaws we’re the most exceptional country in the world. I’m looking for a presidential candidate who can express that, do that, and carry it out,” said the former New York mayor and onetime presidential candidate. “What country has left so many young men and women dead abroad to save other countries without taking land? This is not the colonial empire that somehow he has in his hand. I’ve never felt that from him.”

Crude as he is, Giuliani isn’t wrong to sense a difference between Obama and his predecessors. Previous presidents have been profuse with their praise of America’s perceived exceptionalism. And they’ve done so without question or reservation.

“More than any other people on Earth,” declared John F. Kennedy in a 1961 address to the University of Washington, “we bear burdens and accept risks unprecedented in their size and their duration, not for ourselves alone but for all who wish to be free.”“Across the world,” said Ronald Reagan in his 1982 remarks at Kansas State University, “Americans are bringing light where there was darkness, heat where there was once only cold, and medicines where there was sickness and disease, food where there was hunger, wealth where humanity was living in squalor, and peace where there was only death and bloodshed.” Then, soaring with more outsized rhetoric: “Yes, we face awesome problems. But we can be proud of the red, white, and blue, and believe in her mission. In a world wracked by hatred, economic crisis, and political tension, America remains mankind’s best hope.”

Bill Clinton echoed his predecessors in a 1996 speech defending NATO’s intervention in Bosnia. “The fact is America remains the indispensable nation. There are times when America, and only America, can make a difference between war and peace, between freedom and repression, between hope and fear.”

Likewise, throughout his administration, George W. Bush emphasized America’s exceptionalism and expressed it in terms of its war against terror and tyranny. “Our country has accepted obligations that are difficult to fulfill and would be dishonorable to abandon. Yet because we have acted in the great liberating tradition of this nation, tens of millions have achieved their freedom,” he said in his second inaugural address. “In a world moving toward liberty, we are determined to show the meaning and promise of liberty.”

Barack Obama’s view is a little different. Compared with the visions of his predecessors, his is less triumphant and informed by a kind of civic humility. “I believe in American exceptionalism,” he told Roger Cohen of the New York Times while still just a candidate, but not one based on “our military prowess or our economic dominance.” Instead, he said, “our exceptionalism must be based on our Constitution, our principles, our values, and our ideals. We are at our best when we are speaking in a voice that captures the aspirations of people across the globe.”

As president he echoed this during a now-famous (perhaps infamous) 2009 news conference in Strasbourg, France, where he elaborated on his sense of exceptionalism. “I believe in American exceptionalism, just as I suspect that the Brits believe in British exceptionalism and the Greeks believe in Greek exceptionalism.”Every nation has a sense of its unique place in the world. Even still, Obama said, there are things especially exceptional to the United States. “I think that we have a core set of values that are enshrined in our Constitution, in our body of law, in our democratic practices, in our belief in free speech and equality that, though imperfect, are exceptional.”

To be clear, Giuliani wasn’t somehow right, and to say he even made a point is to overstate the case. But it is true that Obama stands outside the norm. No, he’s not Jeremiah Wright, but he’s not Reagan either.

The obvious question is, Why? Why is Obama more circumspect than his presidential peers? Why does his praise come with a note of reservation?

The best answer, I think, lies in identity. By choice as much as birth, Obama is a black American. And black Americans, more than most, have a complicated relationship with our country. It’s our home as much as it’s been our oppressor: a place of freedom and opportunity as much as a source of violence and degradation. We’re an old American tribe, with deep roots in the land and a strong hand in the labor of the nation. But we’re often seen as other—a suspect class that just doesn’t fit.

As a president from black America, Obama carries this with him, and it comes through in his sometimes less-than-effusive vision of national greatness. He loves this country, but he also tempers his view with a nod toward the uglier parts of our history.

This isn’t the exceptionalism of the Republican Party or much of the national mainstream, and it can alienate Americans not used to a more critical eye—it’s why Mitt Romney chose “Believe in America” for his 2012 election slogan. But it is as authentically American as any other. And while Obama is far from a perfect president, I’m at least glad he’s here to give it a greater voice.

In Bouie's telling, "black Americans, more than most, have a complicated relationship with our country" and "Obama carries this with him, and it comes through in his sometimes less-than-effusive vision of national greatness," though he "loves this country."

This is all valid and accurate, as well as relevant, and Bouie is bold to say what few if any others are saying. But it probably is not quite the whole truth, rather 80-90% of it.

The impact of someone's upbringing upon the development of a person varies tremendously, and it is difficult to discern and dicey to speculate. Still, it likely is of some importance that Barack Obama is not your father's president (or your father's Oldsmobile) and the reason goes beyond- at least a little bit- Obama's race.  American presidents like to claim, figuratively, that they were brought up in a log cabin. Bill Clinton, who spent a lot of time in Little Rock and Hot Springs, Arkansas, was "The Man from Hope."  Ronald(6) Wilson(6) Reagan(6), an actor by vocation and as President, claimed humble origins. The images created are not all myth, however; Jimmy Carter really is the man from Plains.

Barack Obama hails from a different past, having been (as a promotional booklet by a literary agency once put it), "raised in Indonesia and Hawaii (and) is the son of an American anthropologist and a Kenyan finance minister."   He lived and went to school in Indonesia from age 6 to 10 and (reports Wikipedia) "reflecting later on his years in Honolulu, Obama wrote: 'The opportunity that Hawaii offered—to experience a variety of cultures in a climate of mutual respect—became an integral part of my world view, and a basis for the values that I hold most dear.'" It is the only state with a plurality of ethnic Asians.

It is ironic that this different kind of American became a centrist and highly pragmatic president.   Still, this gives Barack Obama a larger perspective than any president has had or that most Americans ever have had.  It may not be as important to what one is as being black, but Bouie himself quotes Obama acknowledging "every nation has a unique sense of its place in the world"  and "we are at our best when we are speaking in a voice that captures the aspirations of people across the globe."

Rudy Giuliani knows Obama's background and may even understand its impact. But he is speaking to a largely Republican and conservative audience and reciting facts and offering a reasoned explanation would be just so boring. 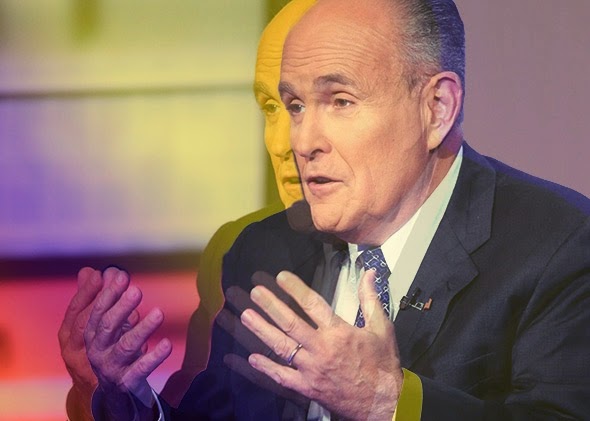