First, They Will Have To Care About Less Well-Off Americans


You must be joking, Reihan,

Reihan Salaam may be the closest thing to a "moderate Republican,"  were that not the closest thing in modern American politics to an oxymoron (thereby replacing "compassionate conservative").  In 2008 he authored with New York Times' house Repub Ross Douthat a book entitled "Grand New Party" which, Salaam observes, "never became a publishing phenomenon on the order of Fifty Shades of Grey."

Salaam finds both hopeful and disappointing the speech of John Ellis Bush on Wednesday to the Detroit Economic Club.  Dana Bash and Jeremy Diamond of CNN helpfully branded the junk Bush peddled as "reform conservatism" which, it turns out, makes him one of the genre of conservatives conveniently branded by a Wall Street journalist the previous day as "reformocon."  Only slightly less naively, Salaam in Slate writes "My reformocon homework assignment for would-be GOP presidential candidates is simple. Don’t just tell us what you’re against. Tell us what you’re for, and be specific."  Fat chance, that.

While arguing "Bush spoke movingly about the challenges facing the tens of millions of Americans who live paycheck to paycheck," Salaam acknowledges the ex-governor "never really reckoned with the fact that America's economic woes began long before Barack Obama became president." He thus went bravely where few if any conservatives or Repubs have gone.  However, Salaam added.

What I really wanted was for Bush to demonstrate that he understood why so many Americans had lost their faith in the Republican Party, and why he deserved their trust. He failed to do that. Instead of offering an agenda worthy of a future president, he offered compassion for those who’ve missed out on the fruits of America’s sluggish economic growth and a series of minor tweaks that are better suited to a governor or a mayor than to the next president. To be the candidate of reform, he’ll have to do better.

He won't, and none of his competitors for the nomination will.  The LA Times reports

Democratic lawmakers Tuesday pushed legislation to stop U.S. companies from reincorporating overseas to reduce their tax bills, saying a wave of so-called inversions last year has nearly doubled the revenue the federal government will lose from those moves over the next decade.

The bill would make it tougher for U.S. firms to buy a smaller foreign competitor in a lower-tax nation and shift the merged company's headquarters there for tax purposes.

Democrats have been trying this for some time:

“When corporations invert, they renounce their American citizenship and don’t pay their fair share of taxes, leaving the rest of us to pick up the tab. That isn’t right,” Sen. Richard Durbin (D-Ill) said as he joined three other lawmakers in pushing for a bill they first introduced last year.

“Today, we are putting these corporate tax deserters on notice: We are not going to stand by while they game the tax code and avoid their responsibility to our country," he said.

The legislation would change tax rules to make inversions more difficult, such as requiring a company to have at least 50% foreign ownership instead of the current 20% in order to be considered foreign for U.S. tax purposes.

A similar bill was introduced last year, based on a proposal in President Obama's budget. At the time, Congress' nonpartisan Joint Committee on Taxation estimated the bill would generate $19.5 billion in tax revenue over the next 10 years that would be lost through the maneuvers.

We al know why that effort failed. Though "the size and pace of corporate inversions picked up last summer," the reporters note, "Republicans argue companies are inverting because the 35% corporate tax rate in the U.S. is the highest among the world's most advanced economies. Key GOP lawmakers said inversions should be dealt with as part of a broader overhaul of the U.S. corporate tax code."

Before taxes, corporate profits accounted for 12.5 percent of the total economy, tying the previous record that was set in 1942, when World War II pushed up profits for many companies. But in 1942, most of those profits were taxed away. The effective corporate tax rate was nearly 55 percent, in sharp contrast to last year’s figure of under 20 percent.

The trend of higher profits and lower effective taxes has been gaining strength for years, but really picked up after the Great Recession temporarily depressed profits in 2009. The effective rate has been below 20 percent in three of the last five years. Before 2009, the rate had not been that low since 1931.

The statutory top corporate tax rate in the United States is 35 percent, and corporations have been vigorously lobbying to reduce that, saying it puts them at a competitive disadvantage against companies based in other countries, where rates are lower. But there are myriad tax credits, deductions and preferences available, particularly to multinational companies, and the result is that effective tax rates have fallen for many companies.

Republicans will not put the brakes on corporate inversions. They will not vote to raise the minimum wage.  And they will never, ever acknowledge the impact of union bashing, which began with Ronald(6) Wilson(6) Reagan(6), on eroding the middle class, nor even on increasing income inequality. The correlation is unmistakable, the causal effect almost as obvious, the former illustrated below with a 2013 graph, whose information is from varied sources and which comes from The Huffington Post: 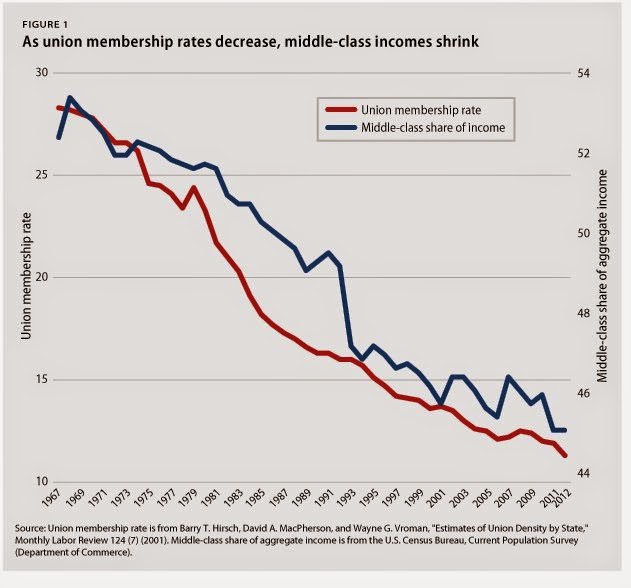 John Ellis Bush, whom Reihan Salaam realized "never really reckoned with the fact that America's economic woes began long before Barack Obama became president," is the media leader in the GOP presidential race. The dog-whistle leader is Scott Walker, the puppet "hired by Koch Industries to manage their midwest facility formerly known as the state of Wisconsin,"  who made his bones among Repubs and the mainstream media by vanquishing unions in his state.  This is not the party of Dwight D. Eisenhower (who was probably to the left of today's Clinton-Obama Democratic Party). It also is not the party o conservatives such as Reihan Salaam and Ross Douthat, moored (however tenuously) to economic reality.