Where does Salon find these people?  Not quite the bigoted Brittney Cooper, fortunately, Musa al-Gharb, identified as a "political philospher" who is "affiliated with the Southwest Initiative for the Study of Middle East Conflict, writes

In other words, the goal should be to have minorities treated more like white people–not to have Bundy and his militia treated more like Muslims or black people, as many have urged. No U.S. citizens should be treated as terrorists for engaging in civil disobedience. It is a profound threat to our democracy that so many are willing, even eager, to call for an authoritarian clampdown on their ideological opponents under the pretext of fighting terrorism. It is troubling when Occupy Wall Street or Black Lives Matter is branded this way–and it would be just as disturbing to inflate the threat posed by Ammon Bundy in order to justify the use of force against his militia.

the militia is not threatening violence, nor even to deface or destroy federal property, if their demands are not met; the only consequence is continued occupation. In the interim, they are being careful not to damage the refuge or its facilities, they have allowed the public to come and go largely unrestricted, and have even claimed that they will vacate the premises if it seems clear that the local population wants them to go. And so, while it is illegal for the militia to be occupying the Malheur Refuge, their actions would be better understood as an act of civil disobedience than an act of terror.

Well, yes, they are terrorists, if the FBI is to be believed. It thinks illegal acts within US territory which "appear intended to intimidate orcoerce a civilian population or to influence the policy of a government by itnimdation and/or coercion" constitute "domestic terrorism." Bundy's people are armed, are "willing to kill and be killed, if necessary," and are determined, as Vox explained it, "ultimately to induce the federal government to turn over government-owned land to local ranchers, loggers, and miners for their use."

Al-Gharb refes to "Muslim-Americans" as he might to "Polish-Americans" or "Italian-Americans," as an ethnic, rather than religious, group. Generously, we can concede that might be only a category error (albeit a significant mistake) rather than a failure to understand that Islam is a religion.  More critically, however, he conflates Muslims, black people, and "minorities" as if the challenges, and opportunites, presented by each group are identical.

Issues surrounding blacks involving a group of Americans, sometimes referred to as "African-Americans" (not synonymous with "blacks," but close enough) and are the legacy of racism and discrimination.  Concern about Muslims among Americans not of that religious faith center upon the threat of terrorism, a far different concern or issue. Al-Gharb's reference to "minorities" is just a mess, a product of an individual whose thinking is so clouded by ideology that his thinking becomes confused.

Thoreau, Gandhi, Martin Luther King, Rosa Parks, Ammon Bundy (image below from Right WingWatch).  Four of them were practitioners of the art of civil disobedience. The other,who believes the government of the USA is not legitimate, leads a band of men with firearms- and they want us to know it. 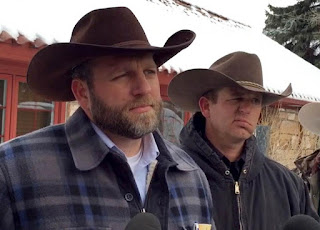 Email ThisBlogThis!Share to TwitterShare to FacebookShare to Pinterest
Labels: terrorism