This Goes Well Beyond Race

I spent a lot of time last week being outraged by what’s happening in Flint, Michigan and I think every single American should be outraged. We’ve had a city in the United States of America where the population which is poor in many ways and majority African American has been drinking and bathing in lead contaminated water. And the governor of that state acted as though he didn’t really care.

He had request for help and he had basically stone walled. I’ll tell you what, if the kids in a rich suburb of Detroit had been drinking contaminated water and being bathed in it, there would’ve been action.

That's doubtful, but moot.  Neither children in rich suburbs in Detroit, nor children in any rich community in Michigan, has to put up with this.

Writing for MSNBC in March of 2013, Ned Resnikoff explained how democratically-elected mayors and city councils are "neutered" by the State of Michigan, which since 1990 has had the authority to assign Emergency Financial Managers to downtrodden municipalities and cash-bereft school districts. In 2011 the GOP-controlled legislature passed, and Republican governor Rick Snyder signed, Public Act 4, which was later repealed in a referendum but replaced with the nearly-identical Public Act 36. Though

Ostensibly a mechanism for rescuing insolvent Michigan cities and school districts from the brink of bankruptcy, the Emergency Management system has turned into a way for unelected officials to break up public sector unions, privatize public services, and drastically shrink the size of municipal governments. Currently, five Michigan cities are being administered by emergency managers—all of whom were appointed by the state’s Local Emergency Financial Assistance Loan Board (ELB).

When a city fails to meet certain financial benchmarks, the state can step in.

“Basically, there’s a set of conditions that trigger this law, things like missing a payroll or bound default,” Michigan State University economist Eric Scorsone told msnbc. A state review team then examines the city or school districts’ financial health for the governor, who then decides whether a financial emergency has taken place. The governor and state treasurer then determine whether “local officials have the wherewithal to enact a plan,” Scorsone said.

Several Michigan municipalities have fallen under control of an emergency manager, who has assumed greater power since the most recent law was put into effect 36 months ago. It has disproportionately encumbered black citizens more than white; however, the chance to rip up labor contracts, sell public assets, and impose new taxes has been a far greater incentive than any effort to disadvantage African-Americans.

This program of austerity has included unlimited opportunity to cut spending by an emergency manager, who may serve for up to 18 months.  In Flint, the decision to switch water supply to the Flint river was signed by emergency manager Ed Kurtz, who was replaced by Darnell Earley (on right in photo- from the Flint Journal- below, with the city Department of Public Works director). Earley was in charge in Flint, as state Democrats noted, "when the decision was made to switch the city to unsafe drinking water." He later "toasted the switch to the river with city leaders in a ceremony in April 2014," Resnikoff reported. 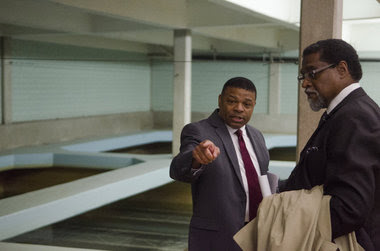 Contrary to the spirit of the law, Earley was replaced by a new emergency manager when he resigned after 17 months and 29 days, whereupon he was rewarded for spectacular management by being appointed emergency manager of the 36,000-student Detroit public school system.

The Flint River, reports CNN, had a "reputation for nastiness" and even after Virginia Tech researchers found the water was very corrosive the state Department of Environmental Quality didn't treat the water for corrosion.

The city in October switched back to Lake Huron for its water supply but the impact upon the brains of children from lead caused by corrosion of the pipes leading from the Flint river will grow greater in the years ahead.  Learning disabilities, mental health issues, and crime will grow exponentially. Eventually, there will be an article in The New York Times, and nowhere else, examining the issue.

In one manner or another, Governor Snyder should be removed his position, as both Hillary Clinton and Bernie Sanders advocate.  (Republican politicians and donors, of course, have little issue with anything that has gone on.)  The problem, however, goes deeper than that, with the concept of the all-powerful manager being hatched at the Mackinaw Center, a right-wing think tank associated with the Heritage Foundation and one of whose major donors is the Charles G. Koch Foundation.
It's about austerity, union-busting, privatization, about exploiting citizens for the wealthy and the well-connected.  If most of the victims are black, so be it.  It is the conservative movement at play.

When the leading Democratic presidential contender- on the eve of Martin Luther King Day- implied that it's primarily about race, she may have been merely pandering to voters in a state in which without blacks, the Democratic Party could meet in a phone booth.  If she was really serious, however, the water ingested in Flint, Michigan is not our biggest problem.