A military order mandating the expulsion or, faling that, the execution of all Mormons has been issued by the governor of Missouri.

Fortunately, that governor was Lilburn W. Boggs on October 27, 1838,  whose order was rescinded by Christopher "Kit" Bond in 1976, proving that Republicans are capable of doing the right thing.

This "curious interpretation of the Bundys' Mormon faith," as Vox's German Lopez describes it, is only one of the factors prompting Ammon Bundy, son of Cliven Bundy, to lead a group of armed members of a militia to occupy the headquarters of  the Malheur Wildlife Refuge near Burns, Oregon (photo from AP/Les Zaitz). The individuals are protesting the sentences meted out to Oregon ranchers Dwight L.Hammond and son Steven D. Hammond, who were convicted of purposely in 2001 setting on fire 139 acres of land owned by the US Bureau of Land Management. The Hammonds originally were given a five year mandatory minimum sentence, which was overturned by a US District Court for being overly harsh, then reinstated by the US Circut Court of Justice. 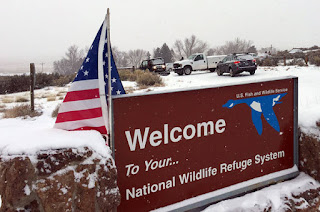 African-American protesters in Ferguson were met with lethal rounds from police, faced down by snipers, were bludgeoned with nightsticks, shot with rubber and wooden bullets, spied upon by drones, and shown the full range of power that is capable of being summoned by America’s hyper-militarized police forces. The protesters in Ferguson were also confronted by the National Guard—a step that the governor of Oregon has so far not taken in order to neutralize the estimated 150 armed white men who are making terrorist threats and engaging in armed insurrection in his state.
A black 12-year-old boy who was guilty of the “crime” of playing with a toy gun in an “open carry” state was summarily executed by local police.

A black man who was selling loose cigarettes on a street corner in order to help support his family was choked to death by police while he screamed “I can’t breathe.”

White folks can brandish real weapons, steal public resources, engage in acts of terrorism and insurrection, and threaten to kill the police and other State authorities with little if any consequences.

Thus, the rule along the color line would seem to be as follows. The State escalates its violence against the defenseless and vulnerable if they are black or brown. In contrast, the State backs down and deescalates if the persons involved are white, right-wing and heavily armed.

It shouldn't be necessary to point out  that if some 150 heavily armed black men took over a federal building in the rural Mountain West (as that part of Oregon could be fairly characterized) and were willing to die to make their point, the reaction of the federal government would be nearly identical.

Of course that won't happen, because Black Lives Matter and other movements of the left don't arm themselves to the teeth and issue an implied threat to take on with unceasing gunfire any government agents who theaten to end their siege. Additionally, such protests likely wouldn't take place in rural Oregon, rural Washington, or rural anywhere, in which waiting out the activists is a viable option.

In two other infamous incidents, Ruby Ridge, Idaho in 1992 and Waco, Texas in 1993, the federal government acted forcefully to end a siege by armed, white gunmen.   These did not end well for either the culprits or government employees- law enforcement or officials- and have stood (fairly or otherwise) as examples of how not to address such standoffs. Slate's Jamelle Bouie observes

Confrontations at Ruby Ridge and in Waco, Texas, ended with scores of dead (white) civilians, and inspired the Oklahoma City bombing—the deadliest terrorist attack on American soil prior to Sept. 11, 2001.

Law enforcement has been willing to use lethal violence against armed white protesters and the results were catastrophic. It’s no surprise federal agents are cautious; they walk with the hard-learned lessons of the 1990s. Even if the Bundys are paper tigers, no one wants to relive the past. In that, law enforcement officials are correct.

Bouie then suggests "the question to ask on this score" is not why don’t they use violence, it’s why aren’t they more cautious with unarmed suspects and common criminals?

But the circumstances of the two kinds of confrontations are not in any way analogous.   The vast majority of the time, law enforcement personnel respond responsibly to street crime, violent and non-violent acts committed by individuals acting alone or nearly alone in an illegal manner because humans are imperfect, and some more imperfect than others.  When terrorists take over a federal building or land, it is "a fundamental disagreement about who controls public land." The armed occupiers are wrong in their methods and in their politics, but arguing while staring down the barrel of a gun is not a good life insurance risk.

Which leaves as the best question: why are such groups of men, or of men and women, not labeled  terrorists?