"No more sulfurous epithet has been sounded in our current presidential campaign," writes Jack Shafer for Politico Magazine, "than the charge that a candidate, media outlet, or party represents the 'Establishment.'"

The issue recently has been especially brought into focus, Shafer explains, on both the Democratic side and the Republican side. In the latter, he notes Donald Trump wrote off the current "Against Trump' issue of the National Review as representing the establishment, after which editor Rich Lowry pointed out "The genuine Republican establishment is currently negotiating the terms of their surrender to Trump."  (Once a year or so, Lowry is right about something.)

Meanwhile, Bernie Sanders (photo below by Andrew Burton/Getty) labeled Hillary Clinton the "candidate of the Democratic establishment" and the front-runner responded by telling Wolf Blitzer her opponent has "been in Congress, he's been elected to office a lot longer than I  have."

"I'll let your viewers make their own judgement," Clinton concluded. Here is one means of determining who represents the Democratic establishment: among current Democratic governors, U.S. Representatives, and Senators, Clinton has received 202 endorsements; among the same group, Sanders has received only two, the co-chairpersons of the Congressional Progressive Caucus, one of whom was the first Muslim member of the U.S. House of Representatives.   That is in (small) part because he was until only recently not even a Democrat but an Independent, and acknowledges being a "democratic socialist," which would be a heck of a way of endearing yourself to the Establishment.

Let's be honest: as a politician, Senator Sanders labeled the groups as part of the establishment mostly because they had endorsed his primary rival.  Still, to be accurate: he was right about at least one of the two groups.

Not so, however, the Human Rights Campaign, as revealed when in July, 2014 Buzzfeed reported

Some of the largest national LGBT rights groups — unified on the marriage equality fight in recent years — have begun a very public debate over a piece of another key goal: religious exemptions in employment protections.

The fight, which broke out into the open on Tuesday, is about scope of religious exemptions in the Employment Non-Discrimination Act, which was passed by the Senate this past fall. Notably, it comes as an executive order about employment protections is being drafted at the White House and in the wake of last week’s Supreme Court ruling in Hobby Lobby.

While the debate isn’t new, the method of raising the stakes of the debate on Tuesday was stark: Seven national organizations — including the ACLU and the National Gay & Lesbian Task Force — announced in three separate statements that they were withdrawing their support for the Employment Non-Discrimination Act due to its current, broad religious exemption....

In addition to the Task Force and ACLU, Lambda Legal, Gay & Lesbian Advocates & Defenders, National Center for Lesbian Rights, Transgender Law Center, and Pride at Work all withdrew their support for ENDA on Tuesday because of that religious exemption.

Supportive lawmakers see that that ground is shifting, although they were not going so far as to oppose the legislation itself. “I am very concerned about the religious exemption in the ENDA bill that passed the Senate,” Nadler told the Blade. “I think it is overbroad and I will of course work hard with my colleagues to narrow it appropriately.” He added that his concerns were amplified by the Hobby Lobbyruling.

Merkley, in a statement to BuzzFeed, echoed Nadler’s concerns, saying, “I share concerns about the Supreme Court’s overly broad reading of religious exemptions. I will keep working with advocates and Members on both sides of the aisle to address this issue. Workplace discrimination against the LGBT community is wrong and must end.”

But there was one prominent, ostensibly pro-gay organization which did not withdraw its support, lest such civil rights stalwarts as Orrin Hatch and John McCain- who had come to favor  the legislation- be made uncomforable.  We read

Making no specific comments about the religious exemption, the Human Rights Campaign is standing by ENDA — with a spokesman telling BuzzFeed on Tuesday, “HRC supports ENDA because it will provide essential workplace protections to millions of LGBT people.”

That is one of the definitions of "Establishment."  It is an organization that is in favor of human rights but accedes to religious exemptions, a notion that discrimination is fine as long as God is for it.

There are other definitions of establishmentarian, such as, Shafer points out, a Republican serving in a Democratic Administration (Bob Gates, anyone?) Among them are supporting changes in a bill to allow some people, those claiming God is on their side, to treat some people different than others; and garnering the support of something like 97% of all prominent Americans in your run for the presidency. Bernie Sanders has a point. 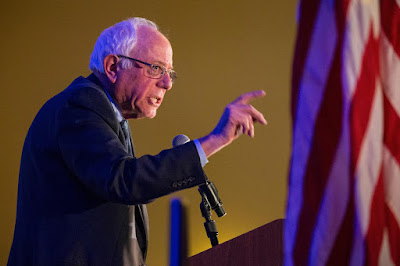