Charlie Pierce and Tom Sullivan need not worry so much about Democratic primary voters.

Pierce deservedly criticizes Justice Antonin Scalia for arguing that government must remain neutral both among religions and between believers and non-believers. With the next President possibly given the opportunity to appoint three more Justices similar to Scalia, Pierce concludes "But, like I said, there's not a dime's bit of difference between a president who would not nominate another Scalia, and a president who would nominate three of them. So feel free to exercise your purity of conscience, while you still have a right to do so."

Sullivan, who blogs impressively at Digby's Hullabaloo, believes too few Democrats are concerned about the course of the Court if a Republican wins. Nonetheless, he finds

What's stunning about the Bernie phenomenon is how lefties disillusioned with Obama's stymied presidency are ready to fall in love all over again with electing someone to the White House who they're sure will deliver sweeping change from Washington this time. I'm over that.

And so, without Sullivan noticing, is almost everyone else.  Much of candidate Obama's appeal, as Sullivan obviously recognizes, went far beyond ideology and experience. It probably began when- and was well captured by- Obama delivered a largely idea-free but stirring speech at the 2004 Democratic National Convention and declared

The pundits, the pundits like to slice and dice our country into red states and blue States: red states for Republicans, blue States for Democrats. But I've got news for them, too. We worship an awesome God in the blue states, and we don't like federal agents poking around our libraries in the red states.

We coach little league in the blue states and, yes, we've got some gay friends in the red states.

As a presidential candidate, Obama assured audiences "we are the ones we've been waiting for," whose presidency would mark "the moment when the rise of the oceans began to slow and our planet began to heal." It was even more inspirational coming from an individual raised by a single, white mother and who was poised to become the nation's first black President, an anthropological contradiction but culturally inspiring, nonetheless.   It's unsurprising that the Obama candidacy would inspire love and devotion from voters unmatched since at least the Reagan era.


But in contrast to Obama 2008 and notwithstanding Sullivan's inference, infatuation is neither what Bernie Sanders is counting on nor the response he's evoking.   On the Senator's website, we read "there is something profoundly wrong when the top one-tenth of one percent owns almost as much wealth as the bottom 90 percent" accompanying graph from his website, below), characteristically uninspiring rhetoric. 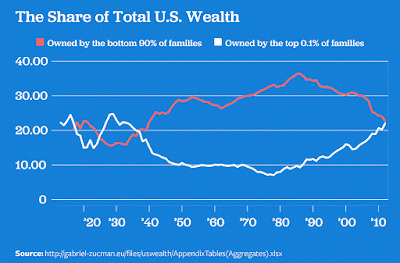 Bernie Sanders is no Barack Obama. He is whiter, much older, less charismatic and inspiring, gruff where Obama is soothing. The Sanders' campaign is about issues, in marked contrast to Obama's march to the nomination in 2008, which was primarily about the man himself. This is not about love.

Rose-colored glasses are much less in evidence among Democratic voters now than they were eight years ago. However, what swooning there is has not been for Bernie Sanders but for his major opponent and likely nominee, Hillary Clinton. For some limited number of Democrats, 2008 was to be the year a man would break the racial ceiling. Check. For some of those, 2016 is to be the year a woman would break the gender ceiling. Check that off.

Sullivan can r-e-l-a-x.  The Democratic campaign will not be dominated by voters with psychological lust for an elderly, white Jewish man with limited charisma and unremarkable personality.