Look No Further Than Philadelphia


There are many reasons Donald Trump is leading the Republican presidential race. Among them is attitude. Trump isn't any more conservative than the other guys and gal, but he has attitude.

Conservative attiutde includes periodic reference to "political correctness."  At one debate, Trump stated "I think the big problem this country has is being politically correct. I’ve been challenged by so many people and I don’t, frankly, have time for total political correctness. And to be honest with you, this country doesn’t have time, either."

There are innumerable examples of political correctness- liberal, conservative, centrist, or non-ideological, though it's only the liberal sort which sets Republican voters on edge. That would include a recent event at one of the two Philadelphia, Pa. FM sports talk show stations. Well-known Philadelphia sports blog "Crossing Broad" described the response on the afternoon show on WIP to a news conference featuring the owner of the Philadelphia Eagles after he had fired the team's head coach:

Josh Innes, talking to Hollis Thomas, who is black, about Jason Kelce, who was in attendance at the press conference:

Innes: “Jason Kelce’s already there, huh? That’s … uh … I’ll give Jason Kelce this, he’s always in character. He never breaks character. His character is: lapdog for whoever the hell the coach is. And he is always … He’s at the press conference, huh? Good for him, bless his heart.”

Thomas: “Actually I don’t really blame him because he’s a guy who wants a job.”

Innes: “Here’s the thing though, right, it’s like this. Let me find a good comparison here. I was watching Malcolm X yesterday, I was in the airport in Memphis watching Malcolm X, and there was a scene where Denzel’s doing the whole thing about the slave and the house negro? Right? And like, the house negro is the guy who’s gonna tell you like, oh he gets to live in the big house with the boss and every time he refers to something that happens in the house it’s ‘our house’ and ‘we’ and everything like that. And then there’s the actual slave that isn’t the house negro that’s just trying to run away. Essentially what you’re getting here is Jason Kelce is the house negro is what I’m trying to convey to you.” 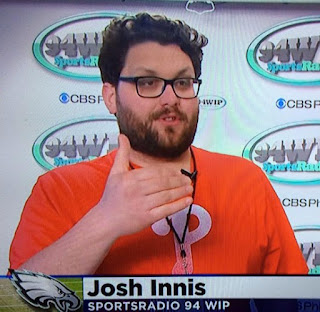 Later in the show, Innes apologized, not only referring to himself as stupid, a moron, and an idiot, but also seemingly criticizing the analogy.  And then he was suspended for three days with the station contending "comments made by Josh Innes during his WIP-FM program yesterday in regards to Eagles center Jason Kelce were inappropriate and unacceptable,. We do not condone or approve of those comments.”

Crossing Broad informs us “'House Negro' (also “House N*gger”) is a pejorative term for a black person, used to compare someone to a house slave of a slave owner from the historic period of legal slavery in the United States."   It originated with the late Malcolm X, who never, as far as I can remembe,r was criticized for use of the word "n_ _ _ _ _," nor for his explanation.

Innes, as the transcript indicates, never even used the "n-word."  Nor does he suggest inferiority of African-Americans.  Nor does WIP indicate that anything Innes said was invalid, perhaps because defending then-head coach Andy Reid was one of Jason Kelce's roles.

But that's how it is with political correctness. The right, which has cornered the term, finds it advantageous to refer to only those things it dislikes as "politically correct." Consider the phrase carefully, however, and the conclusion may be reached that a defining characteristic is that accuracy or truth is irrelevant. And that, sports fans, is one of the reasons Donald Trump's candidacy has caught fire.