Flailing Away At Trump


There is no stand-up comedy routine that can compete with the arguments of the conservatives who took part in National Review's recent "The Case Against Trump" (although a fellow named Reno makes a little sense).

Take Hoover Institution senior fellow Thomas Sowell, whom Republicans long have relished pointing out as a black conservative and intellectual. Uncertain whether Donald Trump or Barack Obama is more of a Nazi, he writes

No national leader ever aroused more fervent emotions than Adolf Hitler did in the 1930s. Watch some old newsreels of German crowds delirious with joy at the sight of him. The only things at all comparable in more recent times were the ecstatic crowds that greeted Barack Obama when he burst upon the political scene in 2008.

That's from an "intellectual," although as Gary Legum points out, conservative intellectual is on the same level as the oxymoron "jumbo shrimp;" or as Charlie Pierce writes, "yes, expanding healthcare and invading Poland, virtually the same thing."

Dana Loesch writes "Dissent used to be 'patriotic' — until the Obama administration used its alphabet agencies to persecute groups such as True the Vote and deny conservative organizations nonprofit status."  Truly frightening the number of conservative groups which lost their non-profit status, a number approaching one.

There was at least one liberal group, the Maine chapter of Emerge America, which did lose its non-profit status, while we await conservatives identifying one conservative group met the same fate. "You can see Dana being oppressed pretty regularly on CNN these days," Pierce remarks, "Give me phony tax breaks or give me death!"

Among those groups investigated, and not "persecuted," were those with "9/12" in their name, which fairly shouts Glenn Beck!, who started the "9/12" movement.  Glenn Beck's contribution to the NR issue included condemning Trump for supporting the "three policies" constituting the "endless fractures in the façade of individual freedom," which he identified as "the stimulus, the auto bailouts, and the bank bailouts."  Surely, there is nothing that defines authoritarianism better than putting 1-3 million more Americans to work, and afterward saving the American automobile industry. And when Beck starts supporting Dodd-Frank (or a strengthening of the legislation) or a breakup of the big banks, we'll all lose consciousness from uncontrollable laughter.

That's no more foolish, however, than the remarks of Federalist publisher Ben Domenech who as a frequent guest on MSNBC's "All In," Chris Hayes appears to find credible. Domenech believes

President Obama’s core domestic-policy agenda was designed to pull working- and middle-class voters left. It assumed that once they received the government’s redistributive largesse, they would be invested in maintaining it — and maintaining the Left in power. Trump’s rise bespeaks the utter failure of this program for the American working class: They have seen the Left’s agenda up close and do not believe it is good enough to make a nation great.

You know about that "government largesse," in which under our socialist President, the top 1% captured over 99% of all income gains generated in the USA from 2009-2012 (graphs, top .1% wealth share in the USA. over time and comparison of wealth among the richest over time, from Saez and Zucman). And it's where the federal minimum wage, stuck at $7.25 per hour since 2009, is worth $4.82 in constant 1996 dollars. 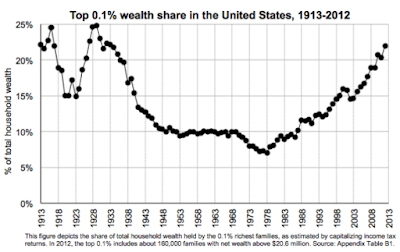 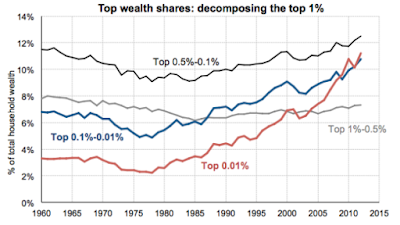 Arguably the most common theme which emerges from the opinions published by the NR is that Trump does not represent traditonal conservative values. The libertarian vice president of the Cato Institute, David Boaz, noted Trump's authoritarian tendencies. However, in a similar vein to Sean Hannity, who once implicitly compared the 40th President to Jesus Christ in his "What Would Reagan Do" campaign, Boaz also wrote

Not since George Wallace has there been a presidential candidate who made racial and religious scapegoating so central to his campaign. Trump launched his campaign talking about Mexican rapists and has gone on to rant about mass deportation, bans on Muslim immigration, shutting down mosques, and building a wall around America. America is an exceptional nation in large part because we’ve aspired to rise above such prejudices and guarantee life, liberty, and the pursuit of happiness to everyone....

I think we can say that this is a Republican campaign that would have appalled Buckley, Goldwater, and Reagan.

Reagan’s race-baiting continued when he moved to national politics. After securing the Republican nomination in 1980, Reagan launched his official campaign at a county fair just outside Philadelphia, Mississippi, the town still notorious in the national imagination for the Klan lynching of civil rights volunteers James Chaney, Andrew Goodman, and Michael Schwerner 16 years earlier. Reagan selected the location on the advice of a local official, who had written to the Republican National Committee assuring them that the Neshoba County Fair was an ideal place for winning “George Wallace inclined voters.” Neshoba did not disappoint. The candidate arrived to a raucous crowd of perhaps 10,000 whites chanting “We want Reagan! We want Reagan!”—and he returned their fevered embrace by assuring them, “I believe in states’ rights.” In 1984, Reagan came back, this time to endorse the neo-Confederate slogan “the South shall rise again"....

Reagan also trumpeted his racial appeals in blasts against welfare cheats. On the stump, Reagan repeatedly invoked a story of a “Chicago welfare queen” with “eighty names, thirty addresses, [and] twelve Social Security cards [who] is collecting veteran’s benefits on four non-existing deceased husbands. She’s got Medicaid, getting food stamps, and she is collecting welfare under each of her names. Her tax-free cash income is over $150,000.” Often, Reagan placed his mythical welfare queen behind the wheel of a Cadillac, tooling around in flashy splendor. Beyond propagating the stereotypical image of a lazy, larcenous black woman ripping off society’s generosity without remorse.


Libertarians are like that. As long as the stereotypes don't include "black" or "white," no harm is intended. For that matter, most conservatives have come a long way- tactically- since the tim Lee Atwater used "Ni_ _ _ _ freely to describe GOP strategy. Even without the overt appeal to bigotry, however, the National Review symposium is, as Pierce put it, "the '27 Yankees of bad ideas."