All Good Until Recently, We Heard


Last night in Philadelphia, Hillary Clinton succinctly summarized the theme of her acceptance speech and entire campaign when she maintained

Our country's motto is e pluribus unum: out of many, we are one.  Will we stay true to that motto?

Well, we heard Donald Trump's answer last week at his conventionwants to divide us - from the rest of the world, and from each other.

He's betting that the perils of today's world will blind us to its unlimited promise. He's taken the Republican Party a long way...  from "Morning in America" to  "Midnight in America." He wants us to fear the future and fear each other.

Helpfully, that one statement summarized also the premise of her address.

Democratic centrist Hillary Clinton gave a nod to the Democratic centrist president she hopes to succeed when she noted "America is stronger because of President Obama's leadership."  But there was little else contrasting the past seven years with the previous eight years- or more importantly, 27 years.  She acknowledged the angst abroad in the land when she conceded

Democrats are the party of working people. But we haven't done a good enough job showing that we get what you're going through, and that we're going to do something about it.

So I want to tell you tonight how we will empower Americans to live better lives.

The LA Times' David Lauter, including a graph (below) of hourly compensation vs. productivity from 1973-2010, remarks (annotated speech here) "For the last generation, wages have stagnated for workers without a college education. Both parties are trying to convince those workers that they have a plan for generating more jobs and higher wages." 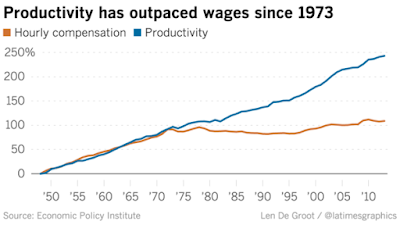 However, Clinton's frame of reference is much more limited. Earlier in the speech, she had commented "Too many people haven't had a pay raise since the crash. There's too much inequality. Too little social mobility. Too much paralysis in Washington. Too many threats at home and abroad. "

But the problem did not begin with the crash, as Bernie Sanders recognized Monday night when he broke the rules (apparently) by noting "this electionis about ending the 40-year decline of our middle class." 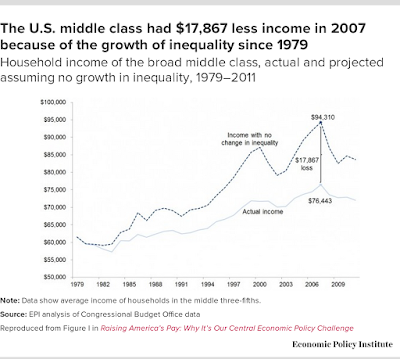 1980 included an election which produced a president who set us on the path of inequality or at least jammed his foot on the accelerator.

We weren't going to hear about that at this convention, which emphasized outreach to independents and to Republicans, especially those concerned about national security. References to George W. Bush's contribution to economic stagnation were largely avoided and nary a mention of Ronald(6) Wilson(6) Reagan(6) was made.

There was little talk of any Republican President, aside from former Reagan Administration official Doug Elmets praising his old boss and Mrs. Clinton charging Donald Trump with having "taken the Republican Party a long way... from 'Morning in America' to 'Midnight in America.'" The subtext, clear though subtle, was that everything was fine until the recent past.

As was expected, the speech was effective. Prior to release of its text, conservatives fretted that Clinton would "bash Wall Street" and liberals were concerned that her remarks would befit an individual who appears determined not to release the transcripts of her well-paid speeches to bank executives.

Not surprisngly, she steered a middle course and even her refusal to acknowledge that the decline of the middle class has roots reaching back a few decades probably was politically wise. Most middle-aged and elderly Sanders' supporters will vote for her anyway, and most of the young ones probably are more concerned over the travesty of rapidly-escalating college debt (which she addressed) and our nation's military posture (which she appears to be satisfied with).

The case has been made that Donald Trump is dangerous and will take us back and that Hillary Clinton is not and will not. Recognition of the nation's structural economic dysfunction awaits another campaign and probably another presidency.