They're Trying To Tell Us What This Election Is About

Speaking to Fox News' "Outnumbered" on Friday, Texas Lieutenant Governor Dan Patrick effusively praised police,  Police officers, he maintained, are "really the only ;people that have a job description that every day when they go to work, part of their duty says, if I have to give my life today, for a stranger that I don't know, who is another citizen, whether they're for meor against me I will."

"We have to have the backs of law enforcement," Patrick added, and "they have to know, from the general public that we will not tolerate when people threaten to kill them."

But Patrick wasn't talking about Michael Xavier Johnson. He was talking about the factors which in his twisted mind precipitated the murder of five police officers in Dallas and the wounding of several others. They included Jesse Jackson, "former Black Lives Matters protests," and individuals "out on social media and mainstream media and everywhere else (who) say that the police are racist, that the police are hateful or police are killers."  (Note: in earlier days, critics of the underclass would blame "JesseJacksonAlSharpton" for anything race-related.)

But his more significant, albeit far less controversial, remark was

I grew up in a world, I've been around long enough, that we’ve always had bad people, we’ve always had dangerous people but the general public respected the police.  Too many in the general public, who aren't criminals but have a big mouth are creating situations like we saw last night. This was obviously organized weeks ago because as some someone said earlier this rally, or this protest wasn't arranged until about this time yesterday morning. So this was going to happen at some point. These men were going to use a trigger moment....

"I've been around long enough, that we’ve always had bad people, we’ve always had dangerous people but the general public respected the police." Lest we write Patrick off as simply a manifestation of warped Texan culture (with apologies to the city of Austin, an outlier), his sentiments reach a larger audience in the response of Donald J. Trump, who on Friday issued the statement

Last night’s horrific execution-style shootings of 12 Dallas law enforcement officers – five of whom were killed and seven wounded- is an attack on our country. It is a coordinated, premeditated assault on the men and women who keep us safe.

The senseless, tragic deaths of two people in Louisiana and Minnesota reminds us how much more needs to be done.

This morning I offer my thoughts and prayers for all of the victims’ families, and we pray for our brave police officers and first responders who risk their lives to protect us every single day.

Our nation has become too divided. Too many Americans feel like they’ve lost hope. Crime is harming too many citizens. Racial tensions have gotten worse, not better. This isn’t the American Dream we all want for our children.

This is a time, perhaps more than ever, for strong leadership, love and compassion. We will pull through these tragedies.

Perhaps it was the reference to "love and compassion," his offer of "thoughts and prayers for all of the victims' families" or to "the senseless, tragic deaths of two people in Louisiana and Minnesota." Maybe it's simply a Republican acknowledging the deaths of young black men. Whatever it was, the usually wise, and unusually wise, Steve M. was impressed by contents of the statement, as were many tweeters and The Washington Post's Greg Sargent, no conservative Republican he.

Yet, Trump's statement, a little more balanced and far less vitriolic than that of Patrick, bears the same markings of someone pandering to the perception that there was a magic, golden era of America that existed way back before, say, January 20, 2009.

For the Lieutenant Governor, it was "I grew up in a world, I've been around long enough, that we've always had bad people, we've always had dangerous people but the general public respected the police."  The "bad" and "dangerous people" of whom Patrick speaks were in fact more numerous back in those days in which he believes "the general public respected the police."

Similarly, Trump- borrowing from Nixon's Southern Strategy- now speaks of "law and order." He, too, furthers the myth that crime has soared as he argues "We must restore the confidence of our people to be safe and secure...." Yet,  as the graphs (respectively, from FBI Uniform Crime Reporting Statistics via Business Insider; FBI Uniform Crime Reports via Left Call; Bureau of Justice Statistics via Forbes) below indicate, violent crime is down considerably since the mid 1980s and early 1990s, the period when the terms "street crime" and even "crime in the streets" still had some currency. 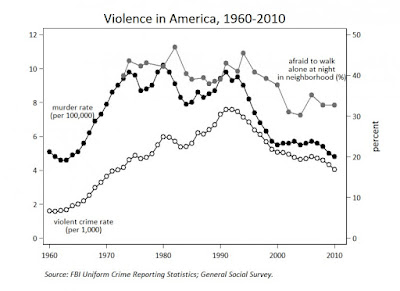 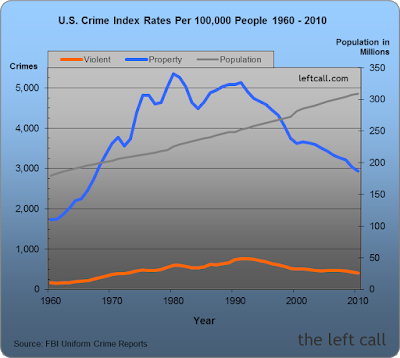 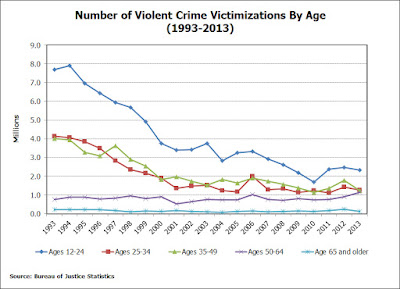 Patrick does not specify when "the general public respected the police" any more than Trump reveals when law and order prevailed.  Inner-city blacks have been suspicious of their local police departments for decades. . Additionally, they may now be less accepting of the abuse of police authority as they hear of, through social media, traditional media, and word-of-mouth of apparent brutality in the face of a declining crime rate.  Their suspicions have been highlighted in several high-profile incidents in the past few years.

More than 200 jurisdictions have some civilian oversight of police conduct, with Kansas City, Mo. the trailblazer over 45 years ago. The distrust by the community of a police department did not begin on President Obama's watch, notwithstanding inferences by the Lieutenant Governor and the presumptive GOP presidential nominee.

Trump's nod to "racial tensions have gotten worse, not better" is a dogwhistle to the right's critics of Obama, who have implied they were duped into believing election of the first black President would end racial tension. Rush Limbaugh, in all his deceptive glory, has advanced this theory as

The theory was that if America, with a vast majority white population and 12 to 14% black population, elected a black man president, "Why, that would speak volumes about how progressive and advanced America had become. It would go a long way toward healing the wounds that apparently remain from slavery and discrimination and all the other things."  But seems it's got worse, to me.  It seems that with the election of Barack Obama, racial strife in this country's worse than it's ever been since the Civil War.

He missed what in the late 1960s and early 1970s we indelicately- yet accurately- labeled "race riots."

Alleging appeasement of violent criminals, the executive director of the National Association of Police Organizations charges "It's a war on cops. And the Obama administration is the Neville Chambrerlainof this war."  He is merely more blunt than a prominent Texas office-holder and one of the two individuals who may become the next President of the United States. The common thread, however, is thee notion that somehow we have gone off the tracks relatively recently.

It's inaccurate and dangerous, an appeal to voters who not only dislike the demographic shift in the nation but use it as a crutch to explain largely unrelated tragedies and events.  Obama partisans hesitant to vote for Hillary Clinton should recognize the attacks- some veiled- not only on the legacy, but also the legitimacy of the incumbent President.