And Now, The Vote


One writer concludes her piece

On Tuesday morning, I am not going to refuse. I am going to say yes to messy imperfection, to sane discourse, to protecting the dignity of all Americans. It’s going to feel great. If you can’t get on board, I genuinely feel sorry for you. You’re not an ally, you’re not patriotic and you’re definitely not my friend. But it’s OK, you’re still a fellow American. And the rest of us are going to save your bacon anyway.

That paragraph does not name the Democratic nominee for President, but it doesn't have to. You recognized Mary Elizabeth Williams' preference when she wrote that if you vote to the contrary "you're still a fellow American."  And that's not the way most conservatives speak.

This is an election in which  one candidate claims "African American communities are absolutely in the worst shape they've ever been in before. Ever, ever, ever..." It's the one in which a candidate brands Barack Obama "the worst President,maybe, in the history of our country," contends "corruption has reached a level like never before," and labels "the legacy of Hillary Clinton: death, destruction and weakness."  He says this with the certainty of a man confident his supporters have lost all ability to discern truth from untruth.

This man is given by one expert a 30% probability of winning, whereas the day before the 2012 election Mitt Romney was given only a 9.1% chance of prevailing (projection less favorable to Trump, from Larry Sabato, in map below).

" When I get into that booth on Tuesday," Williams remarks, "I will be casting a ballot for the person who will best serve a recently incarcerated mom who’s trying to get back on her feet. Who will serve the undocumented immigrant trying to make a better life for his family. Who will serve my young daughters."

a race between a Democrat and a demagogue who has emboldened angry, ignorant, violent people. This is one with a party that’s cool with voter suppression. This is a situation where one candidate’s supporters are actively promoting lynching and think it’s funny, who beat up protestors at their own events.

It is also a race in which the vast majority of Christian evangelicals will be part of the 48%-49% of the American people who will vote for the most vain, boastful, narcissistic, vindictive, nasty, and profit-driven major party presidential candidate in American history. But he's against abortion. Hillary Clinton, they will tell you, is "pro-abortion" and thus unworthy. Of anything.

If Hillary Clinton wins as most objective observers and I expect, we will hear that the USA has arrived, that the good people of our nation have risen up to elect the first female President in history. However, eight years ago we elected our first black President, and hostility toward the President quickly reached a fever pitch, and remained.

The victory today would be a narrow one in which her opponent, whose slogan has been Make America Great Again, has implicitly and explicitly maintained that this is not a great country.  He is wrong, his supporters are wrong, and the rest of us will, as Williams noted, "save their bacon." There will be no acknowledgment of appreciation. 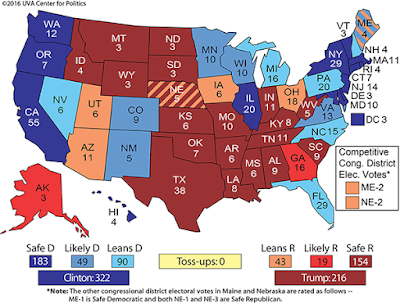