At first, it seemed not only absurd, but purposeless, when on Sunday Donald Trump tweted “In addition to winning the Electoral College in a landslide, I won the popular vote if you deduct the millions of people who voted illegally."

He didn't win the Electoral College in a landslide, of course, as he garnered 306 electoral votes (pending recounts, which could lower the figure). In the six previos presidential elections, the victor was awarded more than 306 votes in four occasions, with the average in the last six elections 336 electoral votes.

But Trump's claim of an electoral vote landslide is no more an accident than the fabrication that he "won the popular vote if you deduct the millions of people who voted illegally."  When he charged fraud

Trump offered nothing to back up his allegations of wrongdoing in the Nov. 8 election -- one that returned to his pre-election mantra of a “rigged” result. Although Trump beat Democrat Hillary Clinton 306-232 in the state-by-state Electoral College, the former secretary of state leads Trump by more than 2.2 million votes in the nationwide popular vote, according to a running tally by the non-partisan Cook Political Report. A Trump spokesman didn’t immediately respond to a request for comment.

On Nov. 13, Gregg Phillips, a former Texas Health and Human Services Commission deputy commissioner, tweeted about there being 3 million votes that were cast by noncitizens.

Attempting to con the masses, Trump is trying to insinuate the myth that there is a conspiracy. Phillip Bump of The Washington Post explains

Phillips claims in another tweet that his organization (it's not clear which organization, but it may be VoteStand) has a database of 180 million voter registrations and he confirms that 3 million of the people in that database who voted are noncitizens. He has been asked to provide evidence for that claim repeatedly, without having done so.

Regardless, the story was quickly picked up by the conspiracy-theory hawking site InfoWars, a story that was linked out at the top of the Drudge Report on Nov. 14.

When Matt Drudge qualifies something with "Claim:" it's worth treating it with skepticism.

The rumor-debunking site Snopes looked at Phillips' claim and found no evidence for it. (It also noted that Phillips has a history of implying that Obamacare will lead to the registration of millions of immigrants here illegally.)

(This is standard operating procedure among conservatives. A website makes something up and then rank-and-file conservatives pick it up and spread it as settled fact.)

And maybe elsewhere.  Four hours after the original remark, Trump tweeted "serious voter fraud in Virginia, New Hampshire and California.  So why isn't the media reporting on this? Serious bias- big problem."

In addition to the standard- yet tactically wise- GOP tactic of whining about the media, this is setting the predicate for claiming a wide-ranging Democratic voter fraud conspiracy.

"The Trump voting tweet," David Frum observed, "may be more than an ego spasm. It may also be a warning that voting is about to be made more difficult for millions."  Donald Trump is no RINO. He recognizes, as does the entire Party, there is no way Republicans can consistently win races for national office without voter suppression, and their success on November 8 will only embolden them. 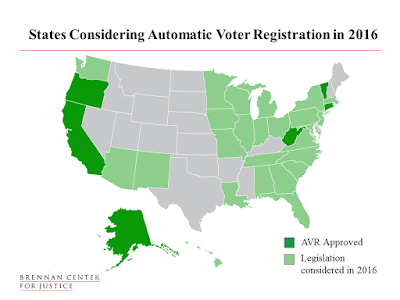