Populist In Image, Not In Substance

Many experts have cited the role of the media in enabling the rise and triumph of America's most famous demagogue.  Among them is the Shorenstein Center in Media, Politics and Public Policy at the Kennedy School at Harvard University, which published a study in June, shortly before the Republican and Democratic national conventions.

The Kennedy School found Trump had received overwhelmingly positive coverage, largely because his campaign could be framed as "gaining ground," rather than "losing ground," "trailing," or "leading" (chart from Media Tenor via Shorenstein Center, 1/1/15-12/31/15).

Failure to cover the Trump campaign adequately in the general campaign followed, though it was concealed by "hot topics" such as Trump's support of sexual assault and animosity toward Mexican immigrants.

In the end, obviously, the former played little role in the election, while the GOP candidate was boosted by the latter. Ignored was Trump's obeisance to special interest groups, manifested in an economic perspective that was radically pro-corporate and a cultural perspective that reflected pandering to the Christian evangelical and pro-gun violence lobbies.

This has not ended. In a recent Politico magazine article about Steve Bannon's love for both Sarah Palin and Donald Trump, Ruairi Arrieta-Kenna writes "years before the partisan provocateur of the 2016 cycle hitched himself to the upstart populist billionaire from New York..."  In late July, 2015 "Bannon made the Palin-Trump populist connection explicitly clear- with a dose of Reagan adulation for good measure."

Arrieta-Kenna, with no sense of irony, recalled that Palin a few days later wrote for Bannon's outfit, Breitbart News "Trump ha tapped into America's great populist tradition by speaking to concerns of working class voters..."  Building the myth of the man as a populist has taken him a long way electorally.

Donald Trump wants everyone to know he is the best, as a negotiator, in the education he has had, the money he has made, and the women he has seduced or grabbed.  His populism is anit-Establishment (in rhetoric) but hardly anti-elite.

Trump doesn't rail about the elite, instead bragging about having attended the elite Wharton School of Finance and of being "really rich,"  He knows "the best negotiators. I’m in New York.... I know people you’ve never heard of that are better than all of them.” He is truly special, and having claimed as President he will be above the law, wants you to know it.

He revels in his status as a wealthy celebrity, yet is portrayed as a "populist."    That "populist" is opposed to a federal minimum wage, wants Dodd-Frank repealed, has a tax plan which gives the 1% a $214,000 tax cut, and has nominated for Education Secretary a billionaire who wants to take public education out of the hands of the public and put it into the claws of private profit-seekers. He owns $120 million to Deutsche Bank, according to The Economist (from which the chart below is taken). 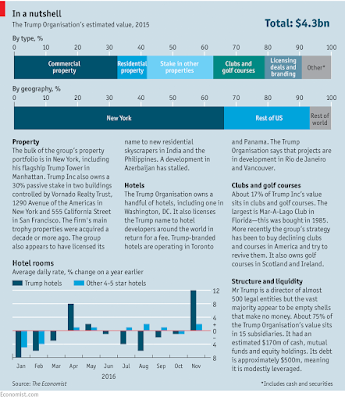 "His children," Jonathan Chait notes, "have taken roles on the transition team. Ivanka attended official discussions with heads of state of Japan and Argentina. The president-elect met with Indian business partners to discuss business and lobbied a British politician to oppose offshore wind farms because one will block the view at one of his Scottish golf courses."