is the nominee because the Democratic Party, which used to fight about great issues of war and peace, of the deeper meaning of foreign and domestic policy -- it was a vital thing -- is now kept together by one central organizing principle: the brute acquisition of power, and holding on to that power no matter what. The worst members of the party appear to care almost nothing about what that power is used for, how it will be wielded to achieve higher purposes. They’re just making a living. They’re just on a team....

The Democratic Party and its lobbyist/think-tank/journalistic establishment in Washington have long looked to me to be dominated by people devoted mostly to getting themselves in the best professional position and their kids into Sidwell Friends School. They want to be part of the web, the arrangement. They want to have connections, associates, a tong. They want to be wired in.

But Steve M. counters with

Is this Democratic Party you recognize? We're at the end of an eight-year democratic presidency. What do you remember about it? A concern with the rights of women, LGBT people, and non-whites. An effort to bring undocumented immigrants out of the shadows. A struggle to wrap up two wars, even if that struggle was often one step forward and two steps back. An end to government-sanctioned torture. A slow process of trying to close Guantanamo. A nuclear deal with Iran. Increased taxation of the rich. And, of course, Obamacare.

Really? None of that qualifies as "fight[ing] about great issues of war and peace, of the deeper meaning of foreign and domestic policy"? Preventing the privatization of Social Security and Medicare, which Democrats have done successfully for the past generation, doesn't count? Denouncing the racism and anti-Muslim bias of the opposing party and its nominee this year -- that doesn't count?

It should, obviously, and the current Administration's concern for the rights of women, non-whites, LGBT people, and illegal immigrants, and even its effort to shut down government-sanctioned torture have led to the point at which Donald Trump now has a serious chance of winning the presidency.

Noonan's claim that the Democratic Party "is now kept together by one central organizing principle: the brute acquisition of power, and holding on to that power no matter" is a splendid example of psychological projection. As one commenter wrote Steve,  "Conservatives can't look at themselves in the mirror, and see their own failings. So, they project those failings onto liberals and Democrats."

In January, the Director of the ACLU's Voting Rights Project explained his organization has "been on the ground" in five (Wisconsin, North Carolina, Kansas, Texas, Ohio) of the ten states which recently had enacted restrictive voting laws ranging "from new hurdles to registration to cutbacks on early voting to strict voter identification requirements"  (map below from the Brennan Center). 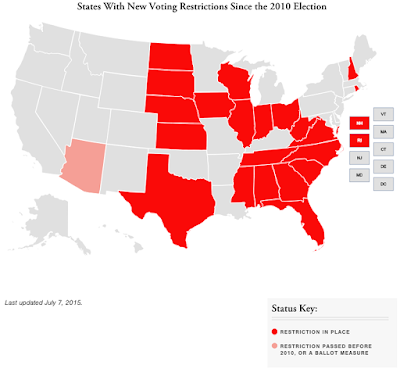 On Wednesday, US District Judge Loretta Biggs, presiding over a lawsuit filed against the State of North Carolina by the NAACP, said the process used by some counties to purge voting rolls sounds "insane" and "like something that was put together in 1901." The arguments come four months after a federal court "struck down much of a 2013 elections law, saying the GOP-controlled General Assembly had disproportionately targeted black voters. The  ruling lengthened in-person early voting by a week and eliminated a photo ID requirement for in-person voting."   That  Court then ruled

Although the new provisions target African Americans with almost surgical precision, they constitute inapt remedies for the problems assertedly justifying them and, in fact, impose cures for problems that did not exist.... We can only conclude that the North Carolina General Assembly enacted the challenged provisions of the law with discriminatory intent.

Of course, a problem does exist- the vote of African-Americans. They overwhelmingly vote Demcoratic and threaten the Party which actually does exist for "the brute acquisition of power, and holding on to that power no matter what."