The prisoner swap is part and parcel of a broader problem with the president's approach to the war on terror.

Put simply, he doesn't seem to understand that we are still at war.

That's inaccurate on two counts, the first that the President does not "understand" that we are still at war. The Daily Beast's Josh Rogin writes

“Sergeant Bergdahl wasn’t simply a hostage, he was an American prisoner of war captured on the battlefield,” Rice said.

But there is a hitch: both the Obama Administration and Senator Rubio are wrong.  Rogin continues

During the five years of Bergdahl’s imprisonment, despite discussing his case in several public briefings, State Department and Defense Department officials made sure not to refer to Bergdahl as a “prisoner of war.” The reason, according to a senior administration official at the time, was that U.S. policy dictated that the rules of treatment for “prisoners of war” under the Geneva Convention did not apply to the conflict with al Qaeda and the Taliban. There was concern that if the U.S. called Bergdahl a “prisoner of war,” the Taliban would say its soldiers in U.S. custody were “prisoners of war,” as well, and would demand Geneva protections.

Some experts said the Obama administration’s sudden use of the term “prisoner of war” for Bergdahl has greater implications for U.S. policy on the treatment of detainees, especially the Taliban.

“It rips open an issue that we’ve put aside for 10 years, which is that some of the people we have imprisoned could be entitled to some Geneva protections,” said Eugene Fidell, a professor of military law at Yale University. “The Obama campaign was critical of the Bush administration going in, but the actual changes in how the Obama treated these guys as opposed to the Bush administration are few.”

Ironically, the Administration of Bush 43, which Rubio supported, appeared not to "understand" the conflict with Al Qaeda as a war.  Rogin continues

The Bush administration decided in 2001 to classify militants captured on the battlefield as “enemy combatants” who were not entitled to protections and privileges afforded to “prisoners of war” under the Geneva Conventions, which the U.S. has signed but the Taliban has not. That allowed the Bush administration to create the prison at Guantanamo Bay and various other prisons around the world, and keep the prisoners out of the eye of international observers.

This runs contrary to the "W is stupid" meme which was popular in some quarters during his presidency.  GW Bush is a bad painter, but was smart enough to understand that the USA's ongoing clash with Al Qaeda is not "war."

Invariably, it is clear who is winning a war, and Rubio's words reflect the national uncertainty over the status of the struggle.  The Senator notes "al-Qaeda is not defeated. Under President Obama's watch, it has instead morphed into affiliates operating in as many as a dozen countries" and claims "the threat from these disparate groups is not subsiding." Clearly, it is unclear who is winning (clearly and unclear; yes, I noticed) and "victory" in the traditional sense, as it is known in war (e.g., the Allies in World War II under Democratic leadership and the North Vietnamese Communists in the Vietnam War under Repub leadership), will be nearly impossible to attain and unrecognizable if it is.  (The world has changed, Senator.)

It is remarkable, further, that a United States Senator who claims concern about the United States Constitution would fail to recognize that the Constitution requires Congress to declare war.  Consequently, he charges with a straight face "The American people deserve better than a president who refuses to speak honestly about the threats we face."  The "war" we're involved in is not ( practically or legally) a war, but would more accurately be labeled a jihad, which translates as "struggle."

Rubio, like Bush 43, is brighter than he appears. Nowhere in his op-ed does he criticize the President for violating the National Defense Authorization Act which, as Joan Walsh implies, is the GOP's most "legitimate complaint" about the swap.  Apparent (notwithstanding Obama's signing statement) violation of the NDAA however, is insufficiently incendiary for most Republicans- and as someone who hopes to be President in three years, Rubio is reluctant to suggest any President has exceeded his authority (photo below of the Senator with the guy who stands between him and a run at the office, from south Florida's Sun-Sentinel).

It is probably unfair to say that patriotism is the last refuge of a scoundrel;  more likely is a signing statement. Not surprisingly, therefore, it's the one thing about the deal that doesn't seem to bother Senator Rubio. 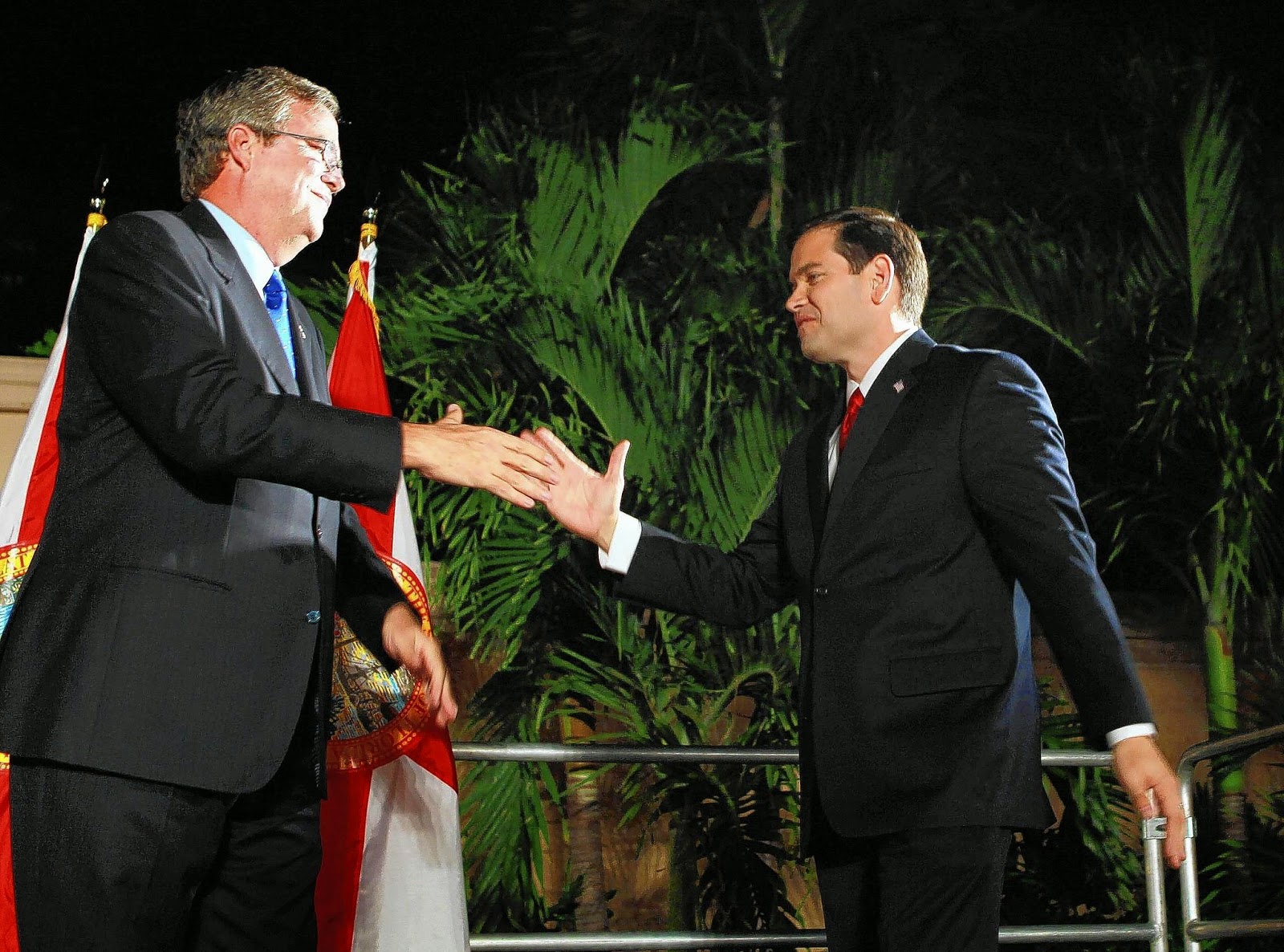