I don't know what Robert Reich thinks of reparations, though perhaps he realizes including it in its national platform would render the Democratic Party obsolete.  Nor does it matter what he thinks of the idea.  For if Robert Reich is right- and he is- Ta-Nehisi Coates is very, very wrong.

Coates argues "something more than moral pressure calls America to reparations. We cannot escape our history. All of our solutions to the great problems of health care, education, housing, and economic inequality are troubled by what must go unspoken."  He supports HR 40, sponsored by senior Michigan Democrat John Conyers (on the ballot for re-election because a Judge says so) because

Perhaps no number can fully capture the multi-century plunder of black people in America. Perhaps the number is so large that it can’t be imagined, let alone calculated and dispensed. But I believe that wrestling publicly with these questions matters as much as—if not more than—the specific answers that might be produced. An America that asks what it owes its most vulnerable citizens is improved and humane. An America that looks away is ignoring not just the sins of the past but the sins of the present and the certain sins of the future. More important than any single check cut to any African American, the payment of reparations would represent America’s maturation out of the childhood myth of its innocence into a wisdom worthy of its founders.

There may be ten reasons HR 40, also known as the "Commission to Study Reparation Proposals for African-Americans Act," is a bad idea.  The first is that it sets up a commission; the second it that it would be virtually unworkable.  Reasons 3-10 are better answered by the working class family down the block, one in which both parents are working outside the home so their children. with their own meager wages, earn enough that they can afford a community college education and a shot (however meager) at the American Dream.

Or maybe we can ask the husband and wife.which wants to take in an elderly, ailing parent but is unable because their apartment is too small.  Or the divorced woman who is working two minimum-wage jobs and still cannot afford health care- or food- for her children.   They probably would have a good explanation of why giving out money on the basis of inherited characteristics such as race is a terrible idea.

Robert Reich- though he may not realize it- also knows why reparations would miss the point of what's going on in the USA these days, as it has been the past few decades.  He notes

America’s largest employer, with 1.4 million workers, refuses to provide most of them with an income they can live on. The vast majority earns under $25,000 a year, with an average hourly wage of about $8.80.

You and I and other taxpayers shell out for these workers’ Medicaid and food stamps because they and their families can’t stay afloat on what Walmart pays. (I’ve often thought Walmart and other big employers should have to pay a tax equal to the public assistance their workers receive because the companies don’t pay them enough to stay out of poverty.)

Walmart won’t even allow workers to organize for better jobs and wages. In January, the National Labor Relations Board issued a complaint accusing it of unlawfully threatening or retaliating against workers who have taken part in strikes and protests.

The firm says it can’t afford to give its workers a raise or better hours and working conditions. Baloney. Walmart is America’s biggest retailer. Its policies are pulling every other major retailer into the same race to the bottom. If Walmart halted the race, the race would stop.

Exploitation of workers for the privileged few isn't limited to Wal-Mart, though it is a particularly flagrant sinner and because of its vast workforce enjoys the greatest opportunity to do right by the American people. Reich continues

Walmart isn’t the only place where low-wage workers are on the move. Two weeks ago, 2,000 protesters gathered at McDonald’s corporate headquarters in suburban Chicago to demand a hike in the minimum wage and the right to form a union without retaliation. More than 100 were arrested.

Giant fast-food companies have the largest gap between the pay of CEOs and workers of any industry, with a CEO-to-worker compensation ratio of more than 1,000-to-one.

Meanwhile, across America, low-wage workers are demanding – and in many cases getting – increases in the minimum wage. Despite Washington’s gridlock, seven states have raised their own minimums so far this year. A number of cities have also voted in minimum-wage increases.

The movement of low-wage workers for decent pay and working conditions is partly a reflection of America’s emerging low-wage economy. While low-wage industries such as retail and restaurant accounted for 22 percent of the jobs lost in the Great Recession, they’ve generated 44 percent of the jobs added since then, according to a recent report from the National Employment Law Project.

But the movement is also a moral struggle for decency and respect, and full participation in our economy and society. In these ways, it’s the civil rights struggle of our time.

Coates presents an informative lesson on American history. Perhaps, though, he could see the forest for the trees if he glanced upon these illustrations, from Curry County (OR.) Democrats: 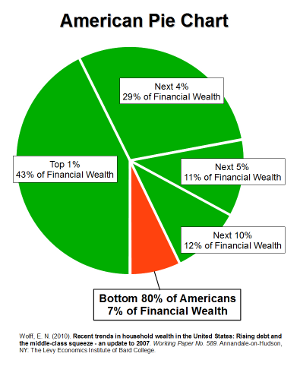 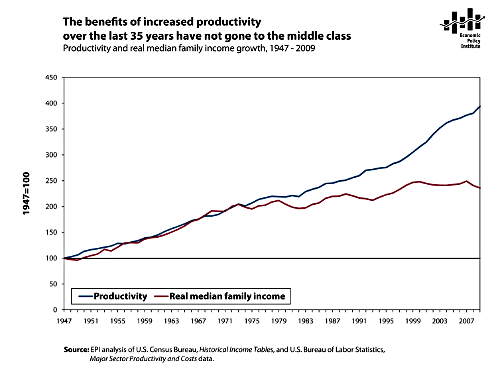 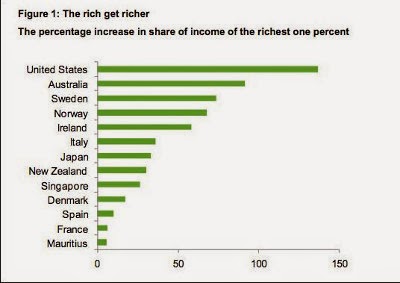 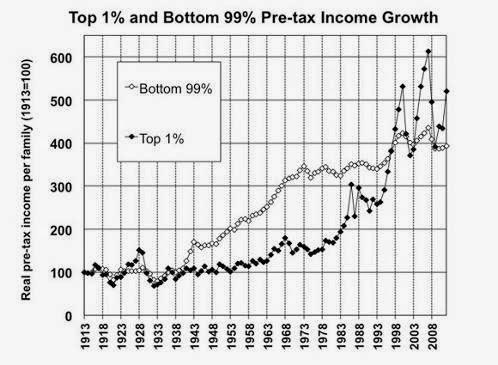 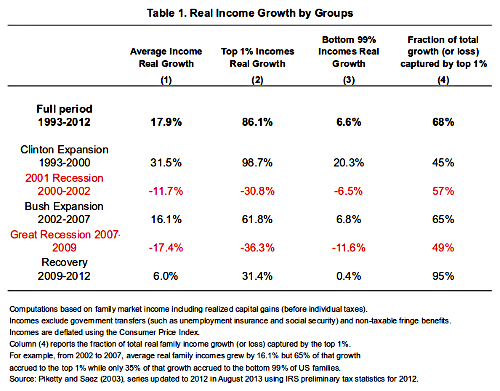 While productivity and corporate profits soar, the average employee in a company takes in .380% as much as does the CEO.  And some of those workers are black. Or white. Or hispanic, Asian, or members of indigenous tribes.    At last glance, no one was suggesting reparations for those workers.