Quite A Mentor That Barack Obama

Thank goodness Senator Barack Obama defeated Senator John McCain in 2008.  If he had not, big money from corporations and billionaires still would be controlling American politics, the U.S.A. would not have finally ended its national nightmare in Iraq, effective gun control measures would not have been enacted, and low-paying jobs still would be dominating the national economy.

Oops.  While productivity has more than doubled since 1968, the minimum wage of $7.25 today is worth $2.00 less than it was worth in 1968.  And the end of the recession and gradual recovery has meant a far greater increase in low-wage, rather than medium- or high, wage jobs as the chart (via Think Progress) below indicates. 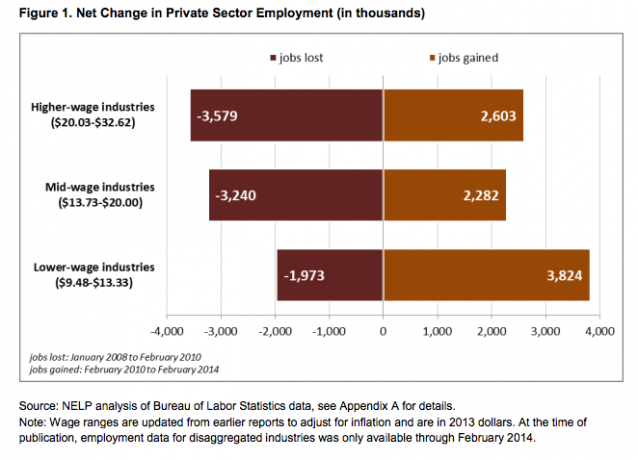 The Obama Administration has been consistently advocated a higher minimum wage.But the educational policy of Administration figures, past and present, belies any understanding of the nature of the socio-economic challenge facing American families today.The President and especially his Education Secretary, Arne Duncan, have supported the Destroy the Public Education, aka "education reform," movement. Now Politico reports


Teachers unions are girding for a tough fight to defend tenure laws against a coming blitz of lawsuits — and an all-out public relations campaign led by former aides to President Barack Obama.

The Incite Agency, founded by former White House press secretary Robert Gibbs and former Obama campaign spokesman Ben LaBolt, will lead a national public relations drive to support a series of lawsuits aimed at challenging tenure, seniority and other job protections that teachers unions have defended ferociously. LaBolt and another former Obama aide, Jon Jones — the first digital strategist of the 2008 campaign — will take the lead in the public relations initiative...

Obama has bucked the teachers unions on many occasions, though they poured resources into electing him in 2008 and again in 2012. His education secretary, Arne Duncan, hailed the Vergara ruling, writing in a blog post that “it took enormous courage for tenth-grader Beatriz Vergara and her eight co-plaintiffs to stand up and demand change to a broken status quo.”

Duncan’s positions have so angered some teachers that the Badass Teachers Association, a more militant offshoot of the two major teachers unions, recently publicized a vote of no-confidence in the secretary.

But LaBolt said he joined Duncan and other Democrats in embracing the idea that “the best way we can ensure that every child has access to a quality education is to provide strong teachers in every classroom.”

Oh, if only that were true.  Duncan employs the "strong teachers in every classroom" tripe, but there are weak teachers- and weak lawyers; weak doctors; weak construction workers; weak engineers; weak computer programmers; weak retail clerks... and so forth.  In every profession, there are workers who either are not very capable or not very efficient; it is the human condition.

So, too, are sickness and death part of the human condition.  It would be spectacular were they not, just as it would be spectacular if we could dramatically improve education by providing "strong teachers in every classroom," marking education as the only profession in the world in which everyone was top-notch.   (By contrast, the vast majority of teachers already is (are?) well-intentioned and devoted to their students.) Perhaps Duncan is enervated by the idea that we can ignore the evidence and imagine that the quality of teachers is paramount in providing quality education. Alas, that is not the case, notwithstanding the propaganda of the reformers.

Jersey Jazzman (blogroll, on right) presents three graphs demonstrating the strong correlation between socio-economic status and test scores of students in New Jersey.   The first demonstrates the relationship "between the percentage of a school's students who qualify for free lunch (a proxy measure for poverty) and average or 'mean' test scores. He observes "nearly three-quarters of the variation in Grade Eight language arts test scores can be explained by poverty." 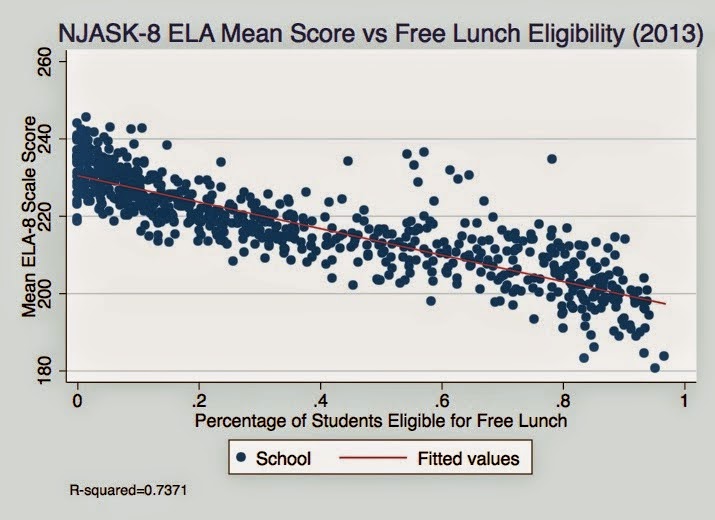 The next graph indicates "60 percent of the variation in Grade 9 math scores can be explained by free lunch eligibility." 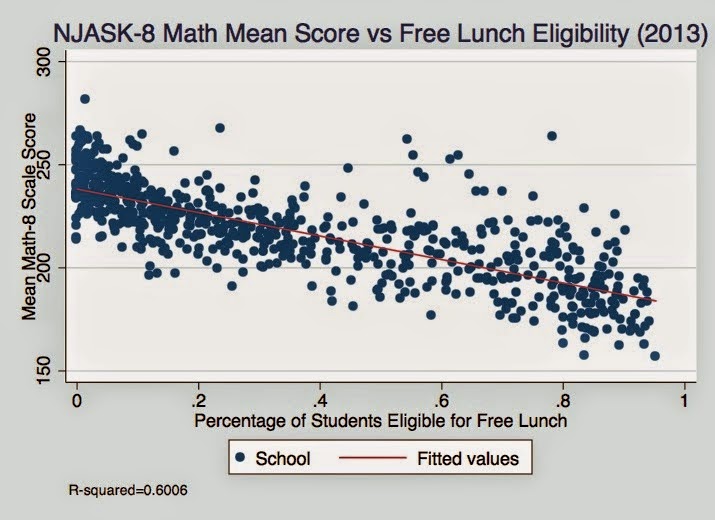 This tendency applies to older youngsters, wherein "over two-thirds of the vaiation in schools' SAT scores can be explained by their poverty rates." 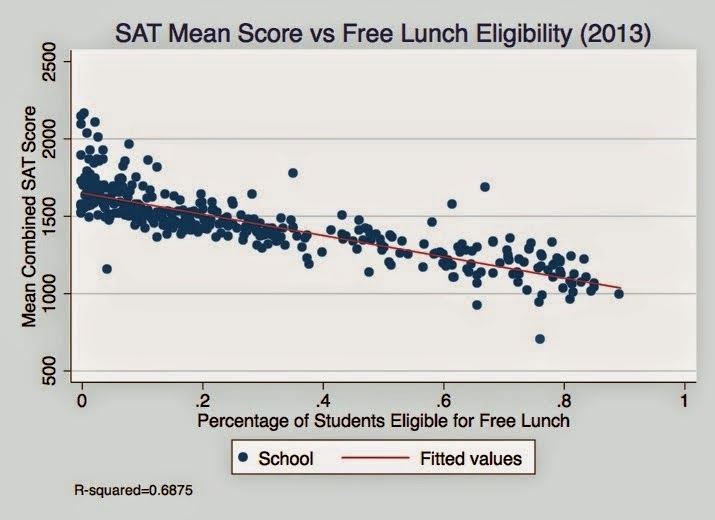 And that tendency evidently applies also to the state of Georgia, in which SAT test scores and eligibility for free lunch are strongly correlated.  This would be less significant, presumably, if Georgia and New Jersey had more in common than both being on the eastern seaboard and having four vowels in their name.

Test scores are not the best indicator of student achievement.  But they have been the holy grail to the likes of Arne Duncan, Michelle Rhee, Campbell Brown, and now, we find, to President Obama's former Press Secretary.   To their fellow travelers, test scores are almost as important as the ability of career-minded administrators to hire and fire teachers at will, as their professional aspirations dictate..