The Right To Arm Bears Shall Not Be Infringed


The National Rifle Association is right.  It is right not in what adorns a wall on the inside of its headquarters, nor in what it claims, but in what it knows the Second Amendment means, and says.

That inconveniently-placed "well regulated militia, being necessary for the security of a free state," has unnecessarily confused many legal scholars. But it needn't do so.  James Madison proposed a raft of amendments to the Constitution on June 8, 1789 and one of them became the Second Amendment which, in 1989 even Robert Bork believed "guarantee(s) the right of states to form militias not for individuals to be armed." As Michael Waldman writes in Politico magazine

There is not a single word about an individual’s right to a gun for self-defense or recreation in Madison’s notes from the Constitutional Convention. Nor was it mentioned, with a few scattered exceptions, in the records of the ratification debates in the states. Nor did the U.S. House of Representatives discuss the topic as it marked up the Bill of Rights. In fact, the original version passed by the House included a conscientious objector provision. “A well regulated militia,” it explained, “composed of the body of the people, being the best security of a free state, the right of the people to keep and bear arms shall not be infringed, but no one religiously scrupulous of bearing arms, shall be compelled to render military service in person.”

Waldman argues "We don’t really know what he meant by" a "well regulated militia" or "the right to keep and bear arms," but in good liberal tradition, he is being overly kind to ideological foes bereft of evidence.  If the guy wanted to ensure "no one religiously scrupulous of bearing arms shall be compelled to render military service in prison," he was not thinking of any individual right to bear arms, but rather a commitment to military service.

The amendment grew out of the political tumult surrounding the drafting of the Constitution, which was done in secret by a group of mostly young men, many of whom had served together in the Continental Army. Having seen the chaos and mob violence that followed the Revolution, these “Federalists” feared the consequences of a weak central authority. They produced a charter that shifted power—at the time in the hands of the states—to a new national government.

“Anti-Federalists” opposed this new Constitution. The foes worried, among other things, that the new government would establish a “standing army” of professional soldiers and would disarm the 13 state militias, made up of part-time citizen-soldiers and revered as bulwarks against tyranny. These militias were the product of a world of civic duty and governmental compulsion utterly alien to us today. Every white man age 16 to 60 was enrolled. He was actually required to own—and bring—a musket or other military weapon.

Former Justice John Paul Stevens agrees, noting the Second Amendment "was adopted to protect the states from federal interference with their power to ensure that their militias were “well regulated."   Thus, he proposes amending the Amendment  to read "A well regulated Militia, being necessary to the security of a free State, the right of the people to keep and bear Arms when serving in the Militia shall not be infringed."

That would reflect the original intent of the Framers of the Constitution, who were intensely interested in maintaining a strong militia to protect against tyranny of the federal government.  It should reassure the right, much of which has convinced itself that a the states are in ever-present danger of being overrun by the federal government and has not noticed there is no state militia in effect today.  The Second Amendment was enacted, as Chief Justice Burger put it in a speech in 1992, "to ensure that the 'state armies'- 'the militia'- would be maintained for the defense of the state."

The National Rifle Association  finds it useful to introduce the text of the Amendment with three dots (...). It understands, as former Justice Burger the previous year had commented, that the Second Amendment "has been the subject of one of the greatest pieces of fraud- I repeat the word 'fraud'- on the American public by special interest groups that I have ever seen in my lifetime." 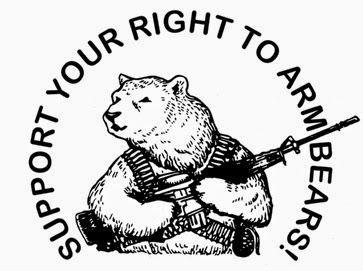 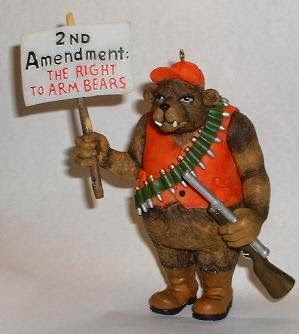 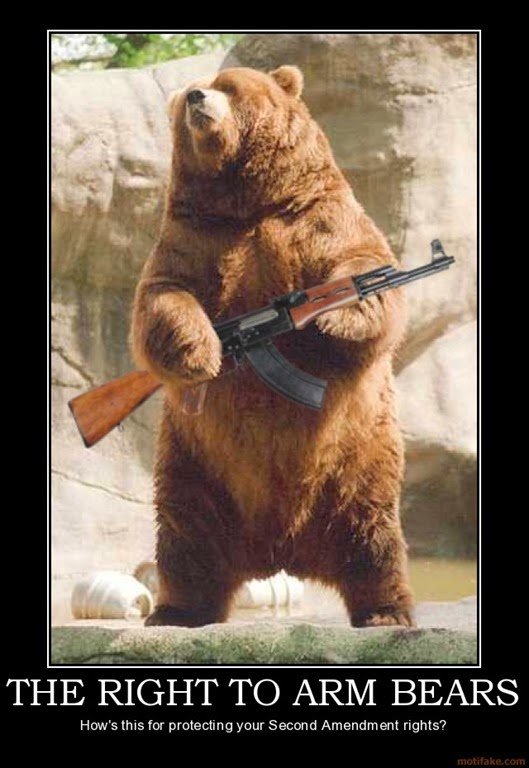