This Has Nothing To Do With Cost

Make no mistake about it: it is very unlikely President Obama would have been re-elected if Supreme Court Justice John Roberts had sided with the four right-wing Justices on the constitutionality of the Affordable Care Act.  Republicans- and not just tea partiers- had been claiming for a couple of years that Obamacare demonstrated that its namesake is a despot who wants to destroy the Constitution. If the Court had ruled against the ACA, the right would have been emboldened while many moderate independents would have bought into the specious charge.

found Rep. Jan Schakowsky, D-Ill., who had just left a House Democratic Whip leadership meeting, where party leaders  took in the news together.

As the news broke, she described “cheers in the caucus."

“I was so thrilled to hear that John Roberts wrote the opinion for the majority five-four decision upholding the Affordable Care Act, or as I like to call it, finally, ‘Obamacare,’ establishing in the United States of America … the law of the land that health care, affordable quality health care is a right for all Americans,” Schakowsky said beaming. “It is the right decision for the American people. That’s the important thing.”

Schakowsky also described the reaction of House Democratic Leader Nancy Pelosi as the decision became clear to the Democratic gathering.

“As a proponent of this legislation, one of the strongest that helped it pass, she was absolutely thrilled,” she said. “I’m so proud. I’m so proud of Nancy Pelosi, who was speaker of the House, guided it through the Congress, and I look forward to her being there as speaker to implement it in the next session.”

Roberts- disturbingly joined by the four liberal justices- struck a blow against use of the Commerce Clause as he ruled that the individual mandate could not be upheld by that constitutional provision, and bizarrely concluded that the mandate is a tax, rather than a penalty.

The long-range implications of rejection of the Commerce Clause have yet to be determine.  But at least, most of us thought, that portion of the decision striking down the requirement that states exp;and their Medicaid program would be of limited consequence because few if any states would turn down the opportunity to increase coverage of the poor when 100% of the cost would be borne by the Federal government the first three years, 90% thereafter.

Most of us would have been wrong.  As of May 22, 20014, 27 states had expanded coverage, three were considering expansion, and 20- 19 of them with GOP governors- were not then expanding coverage (map below from The Advisory Board Company). 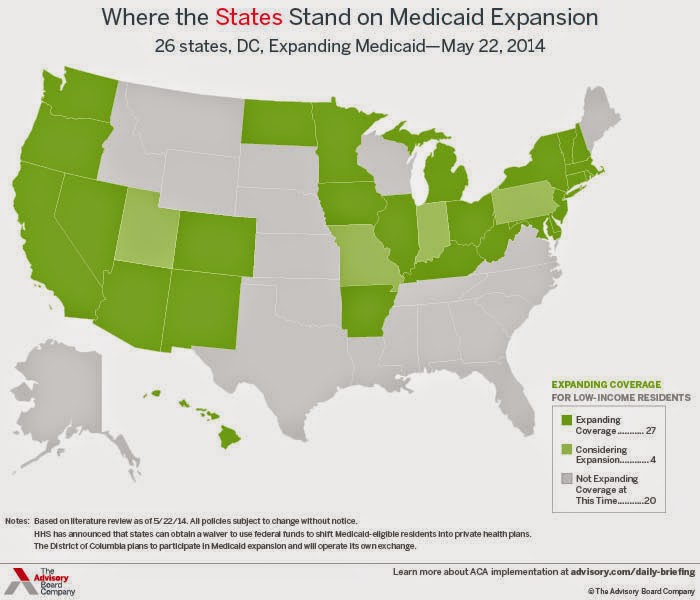 General Assembly adopted a long-delayed state budget late Thursday, acting after an hours-long debate among newly ascendant Senate Republicans who fought among themselves over whether the plan threw up sufficient barriers to Medicaid expansion.

The Republicans, who gained control of the Senate Monday when a Democrat resigned from what had been an evenly split chamber, approved a spending deal hashed out by a bipartisan group of House and Senate negotiators.

But they first amended it in a way intended to make it harder to expand the federal-state healthcare program for the poor under the federal Affordable Care Act — Gov. Terry McAuliffe’s top legislative priority.

As midnight approached, the plan moved over for consideration by the House of Delegates, where it quickly passed. It was expected to then head to McAuliffe’s desk, but with no certainty that he would approve it and avert a government shutdown before July 1.

McAuliffe quickly issued a statement after the House vote: “When this budget reaches my desk I will evaluate it carefully and take the actions that I deem necessary, but this fight is far from over. This is the right thing to do for Virginia, and I will not rest until we get it done.”

The Senate vote came after Republicans huddled behind closed doors and argued — at times yelling, two participants said — over whether they should tinker with the budget deal and risk undermining it.

Some were incensed that legislators had returned to the Capitol from the farthest reaches of the commonwealth, expecting to pass a spending plan in time to avert a July 1 government shutdown, only to risk sinking the deal by amending it.

Well, of course, they had to "delay" passage.  They first had to bribe (successfully) a Democratic senator.  A few days earlier, The New York Times had reported

The resignation of a Democratic state senator in Virginia that flipped control of the Senate to Republicans set off charges on Monday of an unseemly deal and threatened Gov. Terry McAuliffe’s chances of expanding Medicaid under the president’s health care law.

State Senator Phillip P. Puckett’s sudden decision to step down from his seat after serving 16 years may tip a stalemate in favor of Republicans opposed to expanding Medicaid to 400,000 poor and disabled residents.

Democrats accused Republicans of masterminding Mr. Puckett’s resignation by promising him a plum job and speeding the appointment of his daughter to a state judgeship.

Over the weekend, reports that Mr. Puckett was resigning to take a job on the Virginia tobacco commission enraged his fellow Democrats, who saw behind it the hand of Republican officials who control the commission.

The chairperson of the tobacco commission is a Repub member of the state's other legislative chamber, the House of Delegates.  Senator Puckett in effect admitted he accepted a bribe when

There was such an uproar that Mr. Puckett withdrew his name from consideration for the job late Monday.

Mr. Puckett said he had resigned because of family matters, including clearing the way for approval of his daughter, Martha Ketron, as a juvenile court judge. As a matter of policy, the Senate has declined to confirm direct relatives of lawmakers.

“At this point in my life, I feel that I cannot allow my political career to hamper my daughter’s future,” Mr. Puckett said in a statement.

Better to accept a bribe.  Republicans in the Commonwealth are so determined to prevent poor people from obtaining health care that they would offer a bribe to get more poor people to die.  In their defense, they did know who "the weakest link in the chain," as another Democratic state senator put it, is. David Atkins of There Is No Spoon/Hullabaloo/Ventura County Democratic Central Committee notes

Keep in mind that there is no fiscal advantage to Virginia whatsoever in rejecting the Medicaid expansion. Virginia Republicans simply despise the idea that underprivileged people might get health insurance. They really do want the poor to wither and die.