Bergdahl, The IRS, And Whatever It Takes


Mickey Kaus is a long-time journalist and currently a blogger at The Daily Caller.  He is a registered Democrat who mostly touts his (wrongheaded) opposition to unions and support for charter schools, and is most engaged about illegal immigration, upon which he has blogged extensively, and critically.

He should stick to immigration.  Recently, he offered the GOP unsolicited, yet obviously wise, advice pertaining to the Bergdahl release, or IRS e-mails, or whatever has the Party in a manufactured tizzy these days.  He recognizes a drive to impeachment "would give the Dems and the MSM the ammo they need to portray Republicans as extremists-and would predictably boost Democratic midterm turnout, especially among African Americans."  He suggests Republicans not "take the bait. You can babble about 'high crimes and misdemeanors' all you want- after November."

But the talk in and around the issue of impeachment, all the veiled threats and innuendo, rarely are about "high crimes and misdemeanors" but instead about the terrorism certain, they imply, to be unleashed by the release of the Sergeant.

That is well overdone, of course, but does drive the political discussion rightward and gins up Repub enthusiasm for an off-year election.  Not surprisingly for GOP criticism, however, it is disingenuous or woefully and remarkably ignorant.

Whatever the wisdom of the prisoner exchange, it is irrelevant to the issue of impeachment.  Article II, Section 4 of the Constitution, a document many conservatives suggest is close to their heart and lying beneath their pillow as they sleep, require the President, the Vice President, and "all civil officers of the United States" to "be removed from office on impeachment for, and conviction of, treason, bribery, or other high crimes and misdemeanors." President Obama could not constitutionally be impeached (let alone removed from office) for offending the other Party, doing something unpopular, or exercising bad judgement. Were that an allowable basis for impeachment, the Framers would have unwisely criminalized policy disagreements.

The GOP could (as Kaus imagines it has) loudly contend that the President has committed an impeachable offense, a high crime.  The relevant provision of The National Defense Authorization Act for Fiscal Year 2013 reads

1027.
Prohibition on the use of funds for the transfer or release of individuals detained at United States Naval Station, Guantanamo Bay, Cuba
None of the funds authorized to be appropriated by this Act for fiscal year 2013 may be used to transfer, release, or assist in the transfer or release to or within the United States, its territories, or possessions of Khalid Sheikh Mohammed or any other detainee who—

(1)is not a United States citizen or a member of the Armed Forces of the United States; and
(2)is or was held on or after January 20, 2009, at United States Naval Station, Guantanamo Bay, Cuba, by the Department of Defense.

Upon signing the legislation, President Obama issued a signing statement which decried  a group of provisions which

renews the bar against using appropriated funds to transfer Guantanamo detainees into the United States for any purpose. I oppose these provisions, as I have in years past, and will continue to work with the Congress to remove these restrictions. The executive branch must have the authority to determine when and where to prosecute Guantanamo detainees, based on the facts and circumstances of each case and our national security interests. For decades, Republican and Democratic administrations have successfully prosecuted hundreds of terrorists in Federal court. Those prosecutions are a legitimate, effective, and powerful tool in our efforts to protect the Nation. Removing that tool from the executive branch does not serve our national security interests. Moreover, section 1034 would, under certain circumstances, violate constitutional separation of powers principles.

If this is in fact a democratic republic with a real- rather than theoretical- separation of powers with checks and balances, signing statements should be barely worth the paper they're written on or the Word program they're typed on.  Republicans have given relatively little attention to this legal aspect of the controversial swap, perhaps recognizing there will be sometime this century a Repub President, who himself will issue signing statements promiscuously.

But Kaus' far more serious, and more brazenly misleading, suggestion is one in which he links to a Time magazine article about the lost e-mails of 11/1/09 to 4/11 of then-IRS director Lois Lerner He snarks "Another way to drive I-talk, of course, would be to behave in ways palpably reminiscent of the administration of Richard Nixon, a president who many Americans of both parties think should have been impeached (if he hadn’t resigned first). But that would never happen …"

Some of the e-mails since have been recovered and will be provided to Congress. But Richard Nixon- seriously?  Why go back so far?  Acknowledging Nixon's behavior, Digby, noting the outrage! outrage! emanating from Darrell Issa, Charles Krauthammer, and other Republicans, remarks

It’s also interesting how soon these conservative commentators forget a more recent “missing email” scandal. Remember that time when the Bush White House couldn’t provide years worth of emails from the office of the president and vice president involving Scooter Libby and kept it secret for years until it was finally forced to admit that the emails were destroyed and they hadn’t kept a backup? Apparently Krauthammer and company forgot about that. (You’d think his colleague at Fox would remind him — she was the presidential press secretary at the time and the official who finally admitted publicly that they didn’t have the missing emails.) They also forgot about that time when the Bush administration couldn’t turn over emails in the U.S. attorney scandal because they had failed to follow the law and conduct government business on government email servers and had instead used private RNC email addresses.

From Nixon to Obama, Republicans almost continually have found something scandalous (cartoon below from David Fitzimmons of The Arizona Daily Star) which they can act shocked by, and horrified at.Throw it against the wall, and see what sticks. 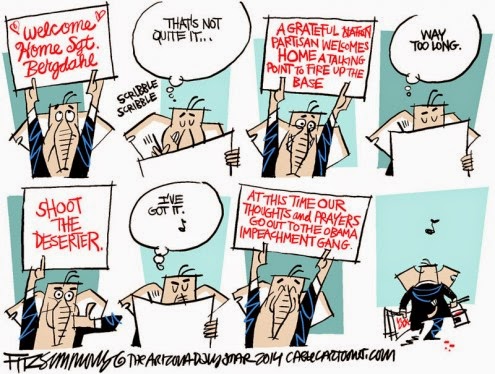 Email ThisBlogThis!Share to TwitterShare to FacebookShare to Pinterest
Labels: Digby