The Court Rules The First Amendment Is A Suicide Pact


Almost exactly twenty years ago- on June 30, 1994- the Supreme Court ruled on a Florida law "which prohibits antiabortion protesters from demonstrating in certain places and in various ways outside of a health clinic that performs abortions."  In a decision in which it found a 36-foot buffer zone around clinic entrances and driveways constitutional, Chief Justice Rehnquist wisely observed "The First Amendment does not demand that patients at a medical facility undertake Herculean efforts to escape the cacophony of political protests."

In a unanimous decision in McCullen v. Coakley, the current Supreme Court of the United States (photo below from Boston Magazine) has decided otherwise.  The Huffington Post's Amanda Terkel puts it into context:

The Supreme Court unanimously struck down Thursday a Massachusetts law allowing abortion clinics to have a buffer zone keeping protesters at least 35 feet from entrances and walkways.

They did so from behind their own buffer zone, which they created for themselves last year to keep away protesters. 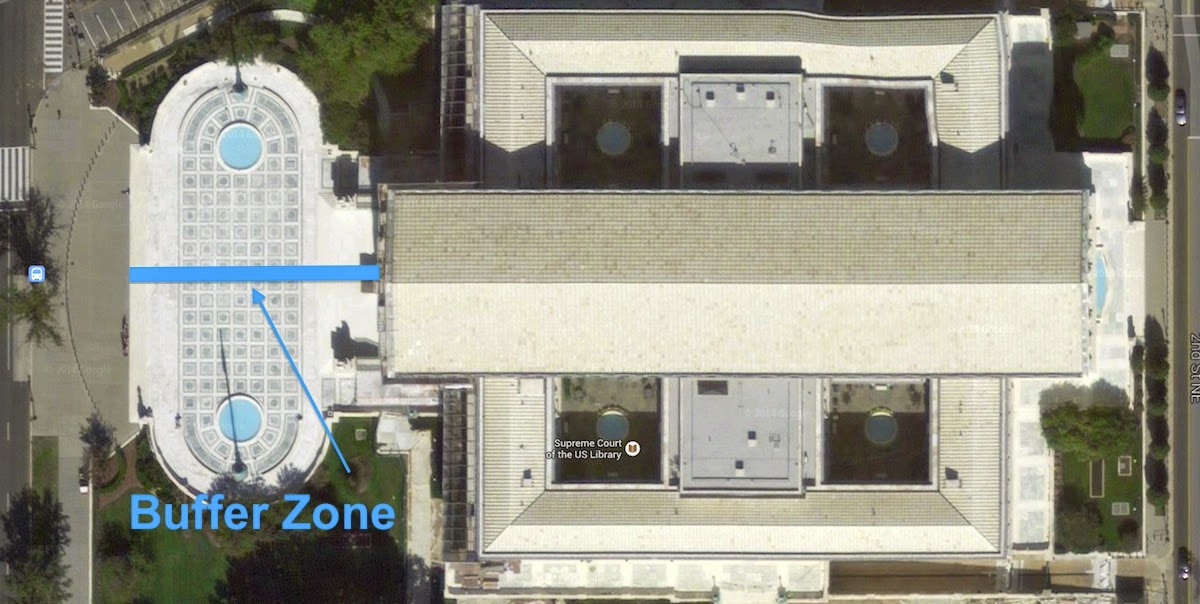 And the Supreme Court is not the only entity that enjoys a buffer zone, a protection against the sort of "counseling" Chief Justice Roberts believes the benignly motivated protesters are offering what are, presumably, their clients.  Slate legal correspondent Dahlia Lithwick notes

While the court is silent about the constitutionality of the “free speech pens” around political conventions, and buffer zones around circuses, churches, and funeral services, presumably they are still permissible. Because those sorts of gentle counselors are different. I am searching for a reason that buffer zones are reasonable at polling places and the Democratic convention, but not for women seeking intimate medical care. Help me Obi-Wans.

In a gorgeously un-self-aware way, the same Supreme Court that severely limits speech and protest in a buffer zone all around its own building, extolls the unique and wonderful properties of the American boulevard in today’s opinion: “With respect to other means of communication, an individual confronted with an uncomfortable message can always turn the page, change the channel, or leave the Web site. Not so on public streets and sidewalks. There, a listener often encounters speech he might otherwise tune out. In light of the First Amendment’s purpose ‘to preserve an uninhibited marketplace of ideas.’ ”

Lithwick is not unfairly ridiculing Roberts, who wrote the majority opinion striking down the Massachusetts law enacted in 2007, for imagining "counseling" as the primary tactic used by protesters. The Chief Justice wrote

Petitioners at all three clinics claim that the buffer zones have considerably hampered their counseling efforts. Although they have managed to conduct some counseling and to distribute some literature outside the buffer zones-particularly at the Boston clinic-they say they have had many fewer conversations and distributed many fewer leaflets since the zones went into effect.

Evidently, the law had been too effective, earning the support of the Boston Police Department and protecting women against threatening harassment.  Prior to enactment of the legislation, the head of security for Planned Parenthood facilities in Massachusetts swore in an affidavit

They carried clipboards and had patients write on clipboards. These patients appeared to be frightened and upset when they learned that [they] were not police. Patients informed me that they had provided their names, addresses, and telephone numbers.

Demonstrators regularly crowd facility entrances and surround women, facility employees and volunteers with graphic and discomfiting pictures of aborted fetuses, and shout at and taunt them calling them "baby killers" and "murderers."

Even more egregious are the protestors who dress as Boston Police Department officers and approach women and their companions at close distance, pretending that they are escorting them to the clinic's entrance, only to taunt them or force leaflets into their hands as they make their way to and from the healthcare facilities.

... fetishizes First Amendment rights. The core of the opinion can be found in two brief quotations from it, which I’ve strung together: “With respect to other means of communication, an individual confronted with an uncomfortable message can always turn the page, change the channel, or leave the Web site. Not so on public streets and sidewalks. There, a listener often encounters speech he might otherwise tune out. … Petitioners wish to converse with their fellow citizens about an important subject on the public streets and sidewalks—sites that have hosted discussions about the issues of the day throughout history. Respondents assert undeniably significant interests in maintaining public safety on those same streets and sidewalks, as well as in preserving access to adjacent healthcare facilities.”

The concern with privacy that animated the Riley case was forgotten after one day. Who wants to be buttonholed on the sidewalk by “uncomfortable message[s],” usually delivered by nuts? Lecturing strangers on a sidewalk is not a means by which information and opinion are disseminated in our society. Strangers don’t meet on the sidewalk to discuss “the issues of the day.” (Has Chief Justice John Roberts, the author of the opinion, ever done such a thing?) The assertion tha tabortion protesters “wish to converse” with women outside an abortion clinic is naive. They wish to prevent the women from entering the clinic, whether by showing them gruesome photos of aborted fetuses or calling down the wrath of God on them. This is harassment of people who are in a very uncomfortable position; the last thing a woman about to have an abortion needs is to be screamed at by the godly.

The issue is not mainly, as the court stated in the last sentence that I quoted, the maintenance of public safety. Most abortion protesters are not violent, and police will be present to protect the visitors to the clinic. The issue is the privacy, anxiety, and embarrassment of the abortion clinic’s patients—interests that outweigh, in my judgment anyway, the negligible contribution that abortion protesters make to the marketplace of ideas and opinions.

They're not "nuts," but fanatics; and many of them are not godly, though the vast majority would claim to be. But Posner does understand that the protesters do not contribute to the marketplace of ideas- nor are they trying to engage clinic patients or workers in debate, civilized or otherwise.   "Counseling" is as far from their minds as is the 2000 World Cup (obligatory sports reference).

"The Constitution is not a suicide pact," conservatives smugly asserted in the wake of the terrorist attacks of 9/11/01.  If left up to John Roberts and the other eight Justices divorced from the reality of life on this planet, the First Amendment would be just that for some Americans.