Dick Cheney and his daughter, Liz Cheney, penned (old term) a column recently in the friendly pages of The Wall Street Journal in which they concluded

American freedom will not be secured by empty threats, meaningless red lines, leading from behind, appeasing our enemies, abandoning our allies, or apologizing for our great nation—all hallmarks to date of the Obama doctrine. Our security, and the security of our friends around the world, can only be guaranteed with a fundamental reversal of the policies of the past six years...

President Obama is on track to securing his legacy as the man who betrayed our past and squandered our freedom.

Oddly- given those baseless charges of the Cheneys, Dick and Liz were right about one thing.

It's not about the remainder of their conclusion,in which they maintained "In 1983, President Ronald Reagan said, 'If history teaches anything, it teaches that simple-minded appeasement or wishful thinking about our adversaries is folly. It means the betrayal of our past, the squandering of our freedom.'"

The duo, seriously memory challenged, argued in the Bergdahl deal "we violated basic tenant (sic) first of all, in negotiating with terrorists..."  Paul Rosenberg reminds us that from 8/12/85 through 10/28/86 there were eight arms shipments to Iran in response to 96 individuals (mostly American and western European) taken by the government of Lebanon.  Ultimately, four American hostages were released and four others abducted or murdered, with a net gain of zero hostages released. (President Obama, by contrast, got one released with no direct damage.) Moreover

Not only did Reagan deal with terrorists as president, as revealed in the Iran-Contra scandal, the preponderance of evidence now supports the charge that his campaign negotiated with Iranian hostage-takers while he was running for president in 1980, to delay the release of hostages before the election, which could have helped Carter win reelection — what was known as “The October Surprise.” Given that Reagan wasn’t president then, but was negotiating to thwart a president’s attempt to get hostages released, this is not simply questionable behavior, it is arguably an act of treason.

Our president doesn't seem to. Iraq is at risk of falling to a radical Islamic terror group and Mr. Obama is talking climate change. Terrorists take control of more territory and resources than ever before in history, and he goes golfing. He seems blithely unaware, or indifferent to the fact, that a resurgent al Qaeda presents a clear and present danger to the United States of America.

It is possible, rumor has it, that an Administration can work on more than one problem at a time, and Obama's attention to global warming with its potential to destroy the planet is more than frivolous, though it does discomfit Dick Cheney's favorite charity, the non-renewable energy industry. And a President too busy to play sports is entitled to golf from time-to-time. Cheney might not be aware that, as Obama was preparing for a vacation last August at Martha's Vineyard, he had taken part or all of 92 days as a vacation, whereas at the same point in his presidency, George W. Bush (whom Cheney served as vice-president) had taken 323 days.

This is not a direct equivalence, given that President Bush sometimes worked during vacations at his ranch in Crawford .  Such was the case when a  CIA briefer on August 6, 2001 handed him the Presidential Daily Brief (photograph of the meeting, below) "Bin Laden Determined to Strike in U.S.," which suggested Osama Bin Laden- whom the Administration was assiduously ignoring- might hijack commercial airliners inside the USA.  Not the slacker Barack Obama is, Bush reportedly told the courier "You’ve covered your ass now" and then went fishing. 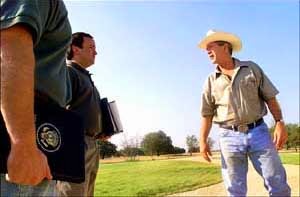 The Cheneys mistake a quick fix for a resolution when they claim "when Mr. Obama and his team came into office in 2009, al Qaeda in Iraq had been largely defeated, thanks primarily to the heroic efforts of U.S. armed forces during the surge." But much of the success attributed to the surge was achieved by the Anbar Awakening months before American soldiers arrived.  The surge functioned as a band-aid (actually, Band Aid; adhesive bandage is the generic term) which staunched the bleeding, but eventually the bandage had to come off. And sometimes, as in the case of Iraq, the bleeding will return because the underlying problem has not been addressed.  The major achievement of the surge probably was the election of a Prime Minister but but

The litany of Maliki’s failures to accommodate Sunni aspirations is well known: his failure to live up to power-sharing promises made in 2010; his extra-constitutional abuses of power; his persecution of Sunni politicians; his failure to sustain ties with Sunni tribes in western Iraq; his refusal to follow through on commitments to integrate “Awakening” fighters into Iraqi security forces; and his heavy-handed response to Sunni political protests in Anbar province last year.

"Now, in a move that defies credulity, he toys with the idea of ushering Iran into Iraq," the Cheneys write of Obama. They add "Only a fool would believe American policy in Iraq should be ceded to Iran, the world's largest state sponsor of terror."   One could hardly imagine, then, that it is members of the Bush-Cheney Administration which have bragged about the surge, which resulted in the ascension to Prime Minister of the staunchly pro-Iranian Maliki.

Dick Cheney (and his daughter) should not be silenced.  But he should be confronted (and not only by Megyn Kelly, as in the video below) because- as with virtually every one  of President Obama's critics- he offers no solution and has been part of the problem. Rand Paul noted "I don't blame President Obama.  Has he really got the solution? Maybe there is no solution. But I do blame those who are for the Iraq War for emboldening Iran. These are the same people now who are petrified of what Iran may become, and I understand some of their worry."