A Game They Will Not Play


In January, the American Family Association issued a news release which- in the unlikely event it would be successful- would give opponents of same-sex marriage a fighting chance when the matter hits the High Court this summer. In part, it read (italics the organization's)


In light of the U.S. Supreme Court’s announcement that it will hear the issue, American Family Association (AFA,www.afa.net) says Supreme Court Justices Elena Kagan and Ruth Bader Ginsburg should recuse themselves from making any same-sex marriage decisions because they have both conducted same-sex marriage ceremonies.

“Both of these justices’ personal and private actions that actively endorse gay marriage clearly indicate how they would vote on same-sex marriage cases before the Supreme Court,” said AFA President Tim Wildmon. “Congress has directed that federal judicial officers must disqualify themselves from hearing cases in specified circumstances. Both Kagan and Ginsburg have not only been partial to same-sex marriage but they have also proven themselves to be activists in favor of it. In order to ensure the Court’s integrity and impartiality, both should recuse themselves from same-sex marriage cases. Congress has an obligation to Americans to see that members of the Supreme Court are held to the highest standards of integrity. The law demands it, and the people deserve it"....

Bill O'Reilly emphatically agrees. However, the District of Columbia legalized same-sex marriage in 2009, as did the State of Maryland in November, 2012. It is not unprecedented for Supreme Court justices to perform wedding ceremonies and the ceremonies cited by the AFA were as legal as opposite-sex marriages. Ian Millhiser persuasively argues

If mere participation in a legal institution was grounds for recusal, then it would be difficult to find judges or justices who weren’t recused from many cases. The speed limit in the state of Colorado, for example, is 75 mph, while other states have lower speed limits. Yet, if a litigant were to challenge one of these lower speed limits in court, a judge would not be required to recuse themselves simply because they once drove on Colorado’s roads and took advantage of its higher speed limits.

It's not only that Kagan and Ginsburg have done nothing wrong.  From 1976 to 1979 Clarence Thomas was a lawyer for Monsanto Corporation and as an Associate Justice has taken substantial money- as gifts or speaking engagements- from organizations advocating the interests of agribusiness.  Yet (or maybe therefore) he still sat when the US Supreme Court decided Monsanto Co. v. Geertson Seed Farms in 2010 and Bowman v. Monsanto Co. in 2013.

Moreover, shortly before the Supreme Court ruled on the constitutionality of the Affordable Care Act, in June 2012 Elizabeth Flock of US News & World Report explained that Justice Thomas' wife Ginni

has been a vocal critic of the Affordable Care Act, and she has certainly made money off of that criticism. In 2009, she founded the Tea Party nonprofit lobbying group Liberty Central, which lobbied against the law. There, she made a salary of $120,000, according to the group's 2010 tax filing.

A startup donation to Liberty Central to the tune of $500,000 came from Harlan Crow, a Dallas real estate investor, Republican donor, and friend of Justice Thomas, Politico reported in 2011. Crow declined to comment to the New York Times about whether he was the source of the money.

Ginni Thomas later stepped down as CEO and president of Liberty Central, but started Liberty Consulting in 2010, which also did anti-healthcare reform lobbying, according to the liberal site Mother Jones.

And in January 2011, it came to light that Justice Thomas had "inadvertently" left out information about his wife's employment over the last 13 years—where her earnings added up to as much as $1.6 million, the Huffington Post reported.

One of her former employers: the Heritage Foundation, where Ginni Thomas made hundreds of thousands of dollars between 2003 and 2007, according to a letter from Thomas to the Committee on Financial Disclosure. The foundation has also been a vocal opponent of the healthcare reform law.

That's (relatively) small potatoes, admittedly. Monsanto won both its cases overwhelmingly and the Supreme Court upheld the constitutionality of the ACA,  though it rejected its Medicaid provision. Of far more consequence, however, was Bush v. Gore (1st cartoon from slideshare.net, 2nd from Ann Telnaes), handed down a little over 14 years ago. Most famously, then- Chief Justice Rehnquist and Associate Justice O'Connor had stated their intention to step down if the Republican became President.

More significantly, however, Ginni Thomas- yes, she again- was at the time working at the Heritage Foundation drawing up a list of potential appointees in a Bush Administration. And Justice Scalia's son Eugene was employed at the law firm of Gibson, Dunn, & Crutcher, one of whose partners was Theodore Olson, lead attorney for the former Texas governor in the Supreme Court litigation.  and later Solicitor General in the Bush Administration. (Scalia's son John worked for the firm representing the ticket in the Florida courts.)

When it really counted- when the presidency of the United States and the integrity of the electoral process were at stake- Repub justices decided personal interests came before morality and ethics. Being Democrats, Kagan and Ginsburg probably would recuse themselves were there an actual conflict.  But there isn't, and they won't. 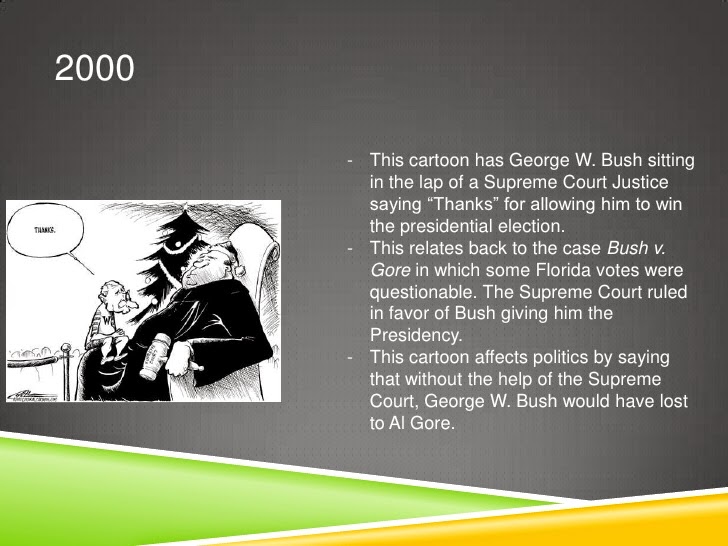 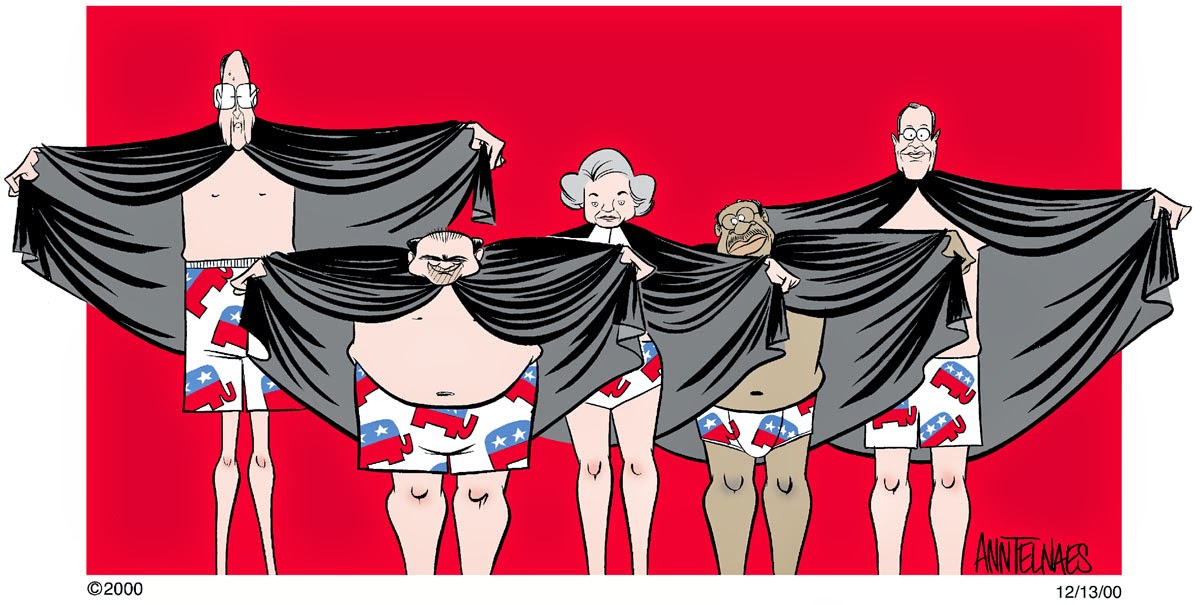