Laying The Groundwork For Plutocrats


Chris Christie is the perfect Republican. He won't get the nomination, especially with Scott Walker hating unions and workers as much as Christie does, Marco Rubio more experienced and just as hawkish on foreign policy, and John Ellis Bush ingratiating himself with the big money donors better than anyone possibly could. But he has seriously, and dangerously, advanced the conservative creed nonetheless.

It's not because of the $225 million settlement his administration has made with ExxonMobil, which had been sued by the State of New Jersey for polluting more than 1500 polluted acres in the northern region of the state.   It's not because he refused to make the contractually-required pension contribution, then even the payment required by legislation he enthusiastically supported.

It is not because he considers public school students "drug mules," nor that he calls medical marijuana, legal in New Jersey but resisted by the governor, "a front for legalization." It's not even because he has slashed social services in New Jersey while eliminating the millionaires' tax which helped pay for them. Nor is it because he falsely imprisoned Kaci Hickox or because he lusts for humongous gifts from nefarious characters.

Instead, Chris Christie is a splendid example of Repub mythmaking because of actions such as

Underneath the gleaming new tower on the north end of the boardwalk, Gov. Chris Christie (R) placed a bet that this down-on-its-luck city was about to turn around. Revel, a massive $2.4 billion casino willed to completion by Christie, was supposed to provide 5,000 “permanent” jobs and fuel a revitalization to the entire city.

“The completion of Revel and its opening is a turning point for Atlantic City and a clear sign that people once again have faith in the city’s ability to come back,” Christie said before the 2012 grand opening, which featured a performance by megastar Beyoncé.

Two years later, the Revel is shuttered — wiping out thousands of jobs amid an economic implosion of the gambling industry here. Rather than serve as a shining example of Christie’s economic stewardship, Revel now stands as a 57-story example of failure in a city that has bedeviled New Jersey governors for decades.

Paul Waldman at one time conducted a poll which revealed that most Americans- even after being told of the huge exemption- favored repeal of the estate tax.  Among the reasons, he theorized, that people who support higher taxes on the wealthy int theory want the estate tax ended is

Americans tend to think that no matter what their current situation, eventually, they're going to be rich. Most of us are wrong about that, but that's what we think. It's practically our patriotic duty to believe it. So most everyone thinks that this tax will apply to their estate upon their death, no matter how modest that estate might be at the moment.

And that's where gambling comes in.  An individual can strike it rich by gambling. It is the longest of long shots- probably slightly likelier than getting struck by lightning,  but it can happen.  Those Repubs who support legalized gambling do so primarily because they believe it increases revenues available to government, an institution which, at other times, they're opposed to. In the short term- the only term most mayors and governors are concerned about- it usually does, although it costs in the long run, after their term is over. They know, too,that their constituents are hoping, even praying, that their number will come up and send a lot of easy money their way.

And if they believe, contrary to the reality displayed in the table and the graph below (from John Cassidy in The New Yorker), that they can leapfrog their peers into the elite, they can support the kind of policies Chris Christie and his fellow travelers promote. 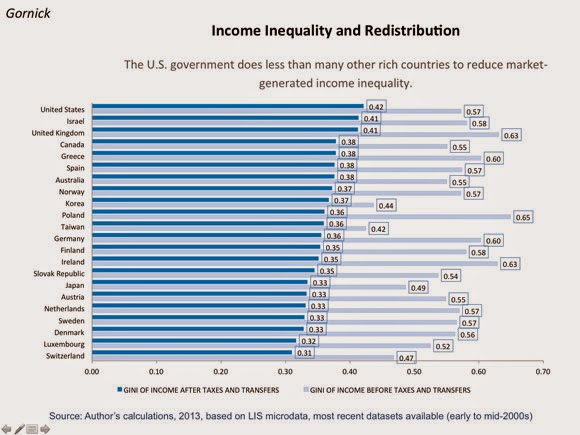 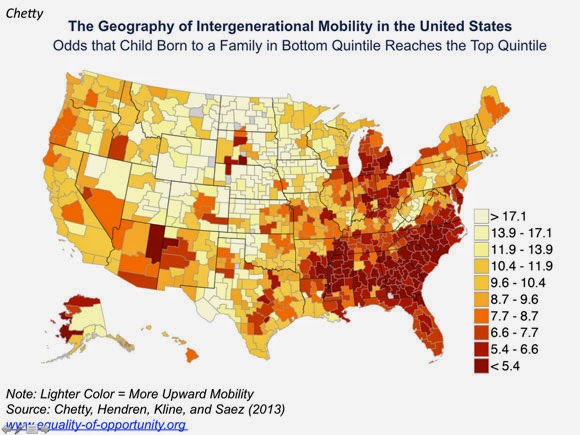