Or What Kind Of A Tree Would You Be?

In the second 2013 gubernatorial debate in New Jersey, Montclair (NJ) State University political scientist Brigid Harrison had an idea. She would ask Chris Christie, running for re-election, and Barbara Buono, his Democratic opponent, their preference: "Wawa or 7-11," two convenience stores prevalent in the state.  (You might remember Barbara Buono as the Democratic gubernatorial nominee ignored by President Obama, who preferred hanging out at the New Jersey shore with Chris Christie.)

John Dickerson has an idea similar to that of Brigid Harrison. Believe it or no, he would ask both Democrats and Republicans, upon their announcement for President, the following questions:

1. What’s the biggest crisis you’ve faced in your professional life and how did you handle it?
2. What's the biggest personal crisis you’ve faced and how did you handle it?
3. What’s your greatest political triumph?
4. What’s your greatest governing triumph?
5. What experience have you had that will serve you well as president?
6. What historical presidential moment tells us the most about your vision of the office?
7. Tell us a joke.

Perhaps if time permits, he would ask an eighth question- "boxers or briefs," though presumably not to Hillary Clinton and Carly Fiorina.  To avoid shortchanging them- and to harken back to Dan Quayle (cheap shot, below)-  Clinton and Fiorina could respond to: if you were a potato, what kind of potato would you be?


If there is even more time, another reporter could ask the Democratic candidates how high they would raise the minimum wage and the Repub candidates, whether they would leave it up to the states to determine the level (as vaunted moderate John Ellis Bush already has advocated).  She might ask each candidate whether he or she would raise the (currently $23,660 annually) income threshold to make more employees eligible for paid overtime and, if so, to what level (which the White House currently is contemplating).  Clearly, there is a wide range of inquiries which might be made about the Trans-Pacific Partnership.

Though probably uncomfortable for Mrs. Clinton, she and the others could be asked whether enactment of the Financial Services Modernization Act was in the best interest of the nation or contributed to the recent recession. (Of course it did but denial of reality by Republicans is frequently entertaining and usually enlightening.)  If Dickerson wanted to try to put the candidates on the spot but without asking an inane question, he would note the income distribution as it in the USA and what the average American thinks it should be (chart below from The Atlantic), followed by inquiring whether they believe Americans are misguided. 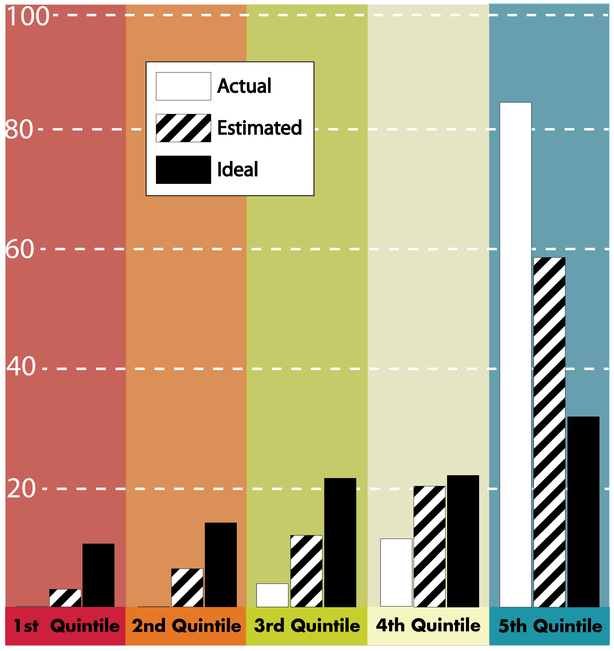 That's without even asking about Medicaid or the earned benefits of Medicare and Social Security. Or women's reproductive health. Or foreign policy. Or Congress' intent to run the U.S. Postal Service out of business. There are so many other things, though there might be no time left to hear their favorite joke.