Charlies Peters, in a post which devastates critics of Senator Elizabeth Warren, writes

Within the Republican centers of power, "Criminal justice reform" does not exist as an actual issue. It exists as dumbshow in an attempt to convince minority voters that the Republican party is on their side. If the Republican party really were interested in actually reforming the criminal justice system in this country, it would have gotten behind then-Senator Jim Webb's attempt to do that during his one term in the Senate. Instead, it filibustered even the possibility of a commission to study the problem. When either the REDEEM Act or the Smarter Sentencing Act come to a vote, then I'll take the point.

Warren, Peters notes, would strongly support these reform measures, but that given the perspective on Wall Street of Booker (whom he says may be a "Wall Street sublet") and his GOP allies, it is slightly ridiculous to suggest the New Jersey senator is more of, or more effective as, a progressive than the Massachusetts senator.

"When either the REDEEM Act or the Smarter Sentencing Act come to a vote, then I'll take the point," Peters vows. However, it is not beyond the realm of possibility than one or the other will, given that neither is particularly confronts entrenched interests and it would be difficult for conservatives to gin up opposition to two fairly innocuous pieces of legislation.

I will take the point when either of two other possible reform measures comes to a vote. A press release from Utah Senator Mike Lee maintains "The Smarter Sentencing Act is a commonsense solution which will "give judges the flexibility and discretion they need to impose stiff sentences on the most serious drug lords and cartel bosses, while enabling nonviolent offenders to return more quickly to their families and communities."

Simpler, though, would be legalizing the possession of marijuana not clearly intended for distribution or, failing that, reclassifying the drug from the category of Schedule 1, where it sits with the likes of heroin and LSD,  which thus are "considered the most dangerous class of drugs with a high potential for abuse and potentially severe psychological and/or physical dependence."  While (or because) sensible, either move would provoke the ire of the right, which would be uncomfortable to Senator Lee (of Utah) or to GOP presidential aspirant Rand Paul or to Ted Cruz (declared GOP candidate), co-sponsors with Democratic Senators Durbin, Leahy, and Booker of the Smart Sentencing Act. Must not allow that to happen.

If real law enforcement or criminal justice reform is to take place, eggs must be cracked, not unlike in making an omelet.  Police culture is one place to start and might include considering, as the Philadelphia Inquirer's Craig McCoy reports,

In Philadelphia, police call it a "nickel ride."

In Chicago, police call it a "joyride."

In Baltimore, investigators are exploring whether Freddie Gray may have been fatally injured - his spine nearly severed - when he was subjected to what police there call a "rough ride."

Whatever the name, the practice of throwing prisoners into the back of police wagons,

unbelted, and then subjecting them to high-speed stops and starts is an aptly named form of street justice that has been secretly administered for many years in many cities.

For rogue police, it is a way to injure suspects - literally without laying a hand on them - and with a guarantee that there are no witnesses.

Gibbons represented a stonemason whose neck was broken after Philadelphia police put him in the back of a police wagon - unbelted. The city paid $490,000 last year to settle the man's lawsuit.

After The Inquirer published a story focusing on his experience and those of three others who alleged the same abuse, the Philadelphia Police Department last year launched a review of how it transports prisoners.

That report is due imminently. Yet, whatever the outcome in Philadelphia, it appears this sort of thing does go on in many jurisdictions.

But the federal government can take major strides to end it.  Washington subsidizes law enforcement in many cities and states with Homeland Security grants, Justice Department grants, and the military surplus program.   If the bipartisan gang reportedly gung-ho on reform wants to start somewhere, it can sponsor legislation prohibiting any money to be sent from the federal government to any city- or to any state which includes such a city- which cannot accurately certify that its law enforcement authorities avoids such tactics.

There would be an additional, more subtle, benefit to drawing attention to this tactic.  Realization would grow that blacks suffer disproportionately when police get out of hand. Yet, as illustrated by the photo below of a man who was awarded $490,000 because his neck was broken during transport by police, whites are not immune. Such clarity has been long been lacking. 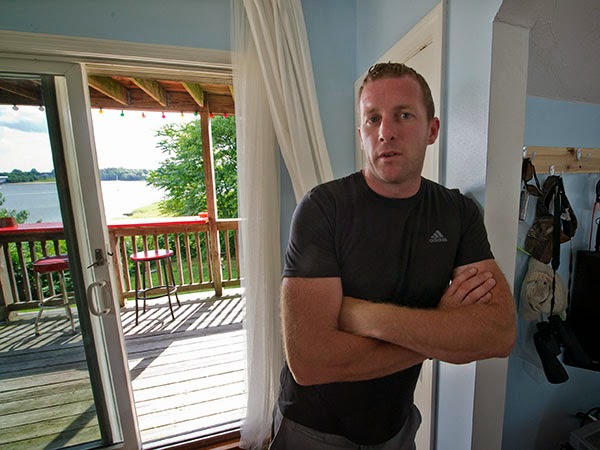