As if there aren't enough reasons to despise Wal-Mart, here is another, with Slate's Dahlia Lithwick explaining

Discriminatory state Religious Freedom Restoration acts—proposed most recently in Indiana and Arkansas and coming soon in Louisiana—have been described as reactions to a spate of big wins for the gay and lesbian community, most notably in reaction to marriage equality...

But these religious freedom arguments are actually rooted in an older movement, a decades-old effort to protect religious “conscience” through health care refusal laws. And it’s a movement that goes far beyond cake bakers and florists, sweeping in physicians, pharmacists, and insurers.Unless you see these new RFRAs as of a piece of this much broader, deeper social movement, you are missing the context that helps frame the debate.

Although not the precise point made by Lithwick- or by NeJaime of the University of California–Irvine and UCLA law schools and Reva Siegel of Yale Law School, whose argument she brings forth- a recent case in Georgia  illustrates both the breadth and depth of the severe implications of religious conscience laws.  The married Brittany Cartrett of Georgia, who became pregnant only because "the Lord has plans that we don't understand sometimes,"

recently learned some bad news from her doctor about her pregnancy. She miscarried around five or six weeks along.

"So we made the decision to not do a D&C and to get a medicine. So he said I'm going to give you this medicine, you'll take it, and it will help you to pass naturally so that you don't have to go the more invasive route", said Brittany Cartrett.

The doctor's office called the Milledgeville Walmart to fill the prescription but they were told no and they were not given a reason.

"So we found another place to fill it but I still had to go up there to get another prescription so when I went up there she asked if I had any questions about this prescription I said no I don't but I do have a question about the other one. And she looks at my name and she says oh, well...I couldn't think of a valid reason why you would need this prescription", Cartrett said.

The drug in question is Misoprostol, which can also used to induce abortions.

WGXA's Chace Abrose spoke off camera to Wal-Mart pharmacist Sandip Patel who said he was aware of the situation and also said that pharmacists have the ability to turn down prescriptions at their own discretion.

Mercer University Law Professor Zac Buck verified that the ability to turn down prescriptions based on personal beliefs has been a law in Georgia for about 15 years.

WGXA also contacted Brian Nick at Walmart's corporate office who stated, "Our pharmacists fill prescriptions on a case by case basis every day in our stores throughout the country and we encourage them to exercise their professional judgment in doing so".

The federal Religious Freedom Restoration Act, passed during the Clinton presidency, stipulated "Government may substantially burden a person’s exercise of religion only if it demonstrates that application of the burden to the person is in furtherance of a compelling governmental interest and is the least restrictive means of furthering that compelling governmental interest."

Certainly, many of the state conscience laws (sources of map the National Conference of State Legislatures, The Atlantic, the Human Rights Campaign) go beyond that, as law professor Marci Hamilton recently noted. Unlike the federal legislation, limited to cases against the government, state statutes may apply to disputes between private parties.In several instances, the definition of "religious exercise" has been expanded and that of "substantial burden" constricted.

"The original federal RFRA was misguided," Hamilton realizes, "and a leap from prior First Amendment doctrine, but it was nothing like this new iteration in the conservative states." This iteration goes well beyond same-sex marriage, well beyond the execrable Walton family, and will cause untold grief under the guise of "conscience," religious and otherwise. 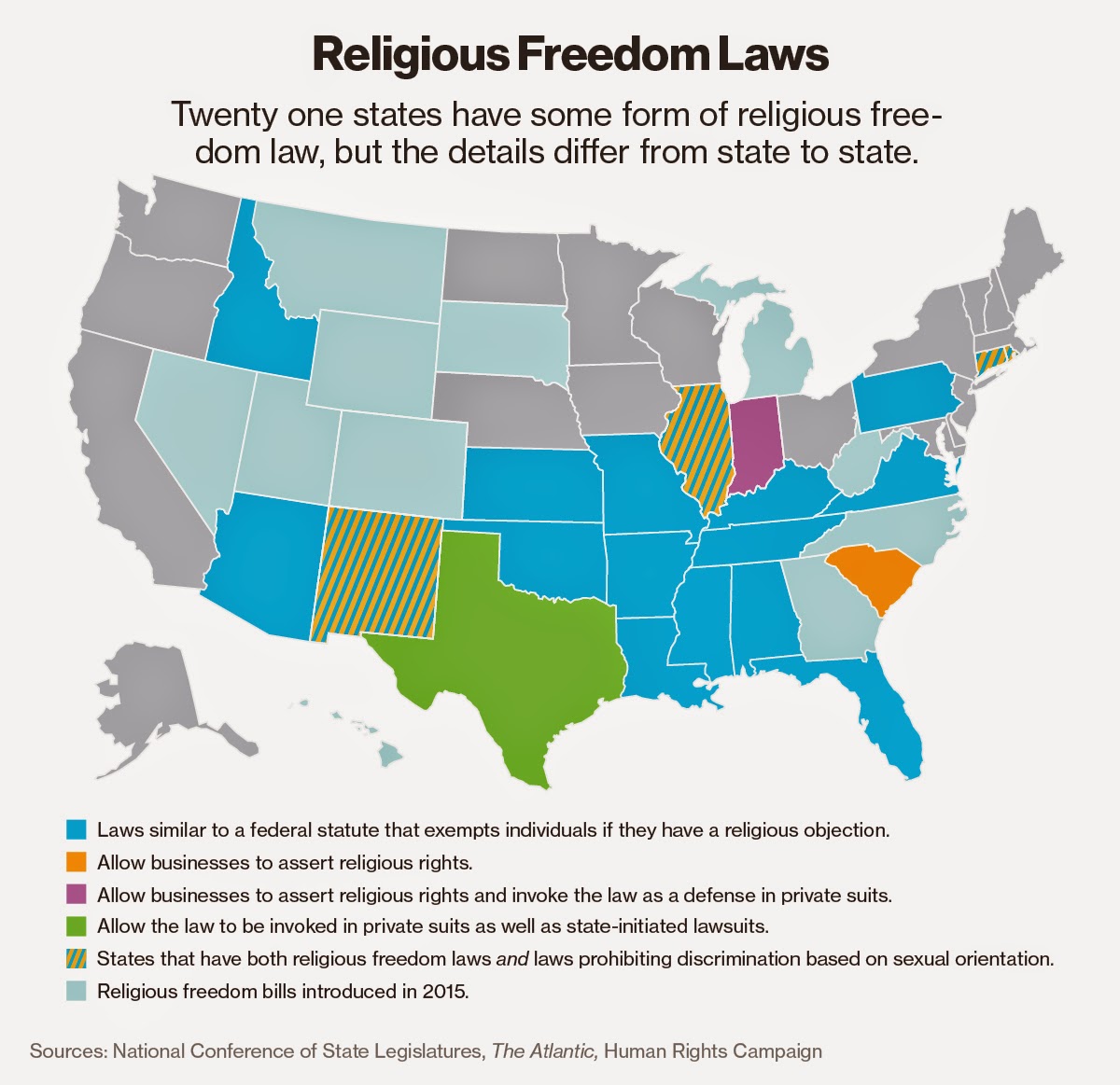