If you hear in the near future that Archbishop Timothy Dolan (photo below from Wikipedia) of New York has converted to Islam, don't be surprised. Be impressed, however, that he will have adopted intellectual consistency.

That would be a welcome change.  On Sunday's Meet the Press, the Cardinal maintained

I mean, even especially with the Islamic fanatics, temperate voices of Islam, and thanks be to God there are many, would remind them that they are not acting loyal to the teachings of the Koran. What do we say, though, Chuck when we know from the human experience, not just religion, that most battles, most bloodshed, is caused by things that we feel passionate about?

We can debate whether each terrorist, from whatever branch of terrorism and in whatever group he belongs to, is not "acting loyal to the teachings of the Koran." As Bob Dole would say, "whatever."   But Dolan believes the behavior of all Islamic terrorists is contrary to the teachings of the Koran. (About the Hadith, he conveniently said nothing; but again, whatever.)

Dolan may be correct. However, that was followed by this:

What did you think of President Obama at the National Prayer Breakfast when he said this? "Unless we get on our high horse and think this is unique to some other place, remember that during the Crusades and the Inquisition, people committed terrible deeds in the name of Christ. In our home country, slavery and Jim Crow all too often was justified in the name of Christ."

I know there were some people that might've thought that his remarks were off the mark. I would simply say as an historian and as a believer, sometimes it's not all that bad to remind ourselves that we are not free from sin, either.

You saw it as appropriate?

I mean, as a leader to say that at that time, whether that was appropriate or not. But I wouldn't say he was wrong.

No. I welcome the fact that the question about religious liberty is in the forefront. We need that. We didn't put it there. We believers didn't put it there. The founders of our nation did. "We have to make sure that the rights and the ability to publicly exercise one's religion is also balanced with another good, namely, the rights of people not to be discriminated against." Boy, that's a delicate balance. I'm grateful that it's in the public eye. Whenever you talk, Chuck, about a balance, which our constitution is a matter of balance, we have to make sure that we keep that balance together.

It's tough to balance religious conviction, though.

It's tough to balance religious conviction. But it's easier to ignore religious freedom than it is today the more popular issues, all right. So, in a way, I appreciate the fact that we have political leaders like Governor Pence who are saying, "Whoa. Wait a minute. Without questioning of the rights of the gay community, we also have to make sure that the rights of the religious community are protected." I just wish we could do that in a temperate, civil way instead of screaming at each other.

Let us stipulate that acts of terrorism and other violence are worse than refusing to serve someone because of her sexual preference (a protected class in some states), or because of her religion, color, national identity, and advanced age (protected classes under federal law). Nonetheless, here we have a prominent official of a Christian church arguing that bad acts by Muslims contradict the religion's teachings- and that bad acts by a Christian do not contradict that religion's teachings.

What Cardinal Dolan refers to as "religious freedom" is not the freedom to worship as one chooses. Lots of people in this country practice religious freedom on Sundays and even substantial numbers on Saturdays or Fridays.  Many individuals, most of them from Cardinal Dolan's variant of Christianity, practice it by going to church daily. No one interferes.

It's the freedom to discriminate the prelate refers to. Don't take it from me- take it from the Archbishop himself, who suggests symmetry between "religious conviction" and "religious freedom."

Many devout Christians, be they Roman Catholic, Orthodox, or Protestant aren't on board with Cardinal Dolan's interpretation of religious conviction. It's not damning to Christianity that Cardinal Dolan believes Christian religious conviction is consistent with the right to deny service to gay people on an equal basis with the heterosexual community. Instead, his interpretation of religious principles, contrary to that held by many devout Christians, should not go unexamined. 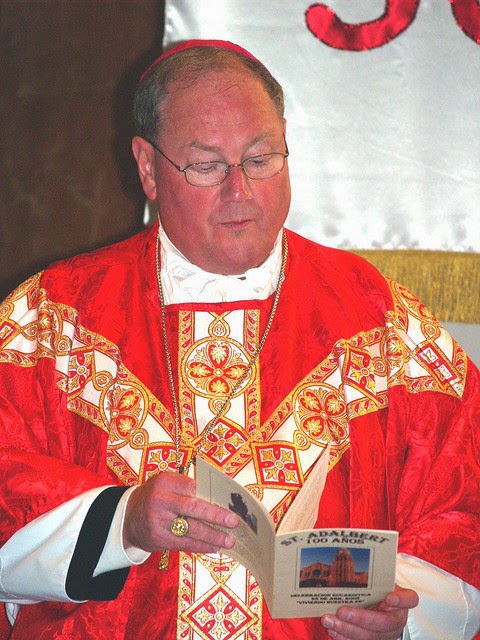 This blog will be on hiatus until Sunday, April 12.  Please return then for scintillating analysis (in all humility, obviously).