Noting "Over the past year and a half, authorities have arrested at least 66 Muslims (including refugees) in the United States on suspicion of plotting terrorist attacks or supporting ISIS," Atlantic contributor and frequent Salon blogger Jeffrey Tayler argues

exactly how many Jesus-freak “Jihadi Johns” have we seen beheading American journalists? How many Syrian Christians have even so much as suggested burning a Quran (remember that pastor in Florida?), let alone advocated slitting the throats of their religious rivals? At least as far as security goes, accepting Christian Syrian refugees hardly seems like a bad idea. In fact, it seems like a no-brainer.

Nonetheless, as an ardent atheist he ultimately recommends, with tongue not fully in cheek

why not consider seeking out atheist Syrian asylum seekers, few though they may be? (We have no definitive stats, but there surely are some.)  Why pride ourselves on welcoming confessional diversity, when the existence of any sort of confession indicates a predisposition to believe wildly nonsensical propositions on the basis of no evidence whatsoever? Why not affirm our Enlightenment roots and, for the first time, announce we wish to shelter nonbelievers?

Though his solution is too extreme, Tayler's logic is clearer upon hearing of the remarks made on the panel of speakers at the Camden, NJ campus of Rutgers- The State University of New Jersey.   The informal discussion prompted by Donald Trump's extreme remark(s) about Muslims was "hastily assembled by two undergraduates," wrote the Philadelphia Inquirer's David O'Reilly (photo below from staff photographer Ed Hille; Imam Hussein on left, Imam Muhammed on right).  The participants, Muslims from the greater Philadelphia, Pa. region, aimed to promote tolerance. In one instance, they also facilitated understanding as, according to O'Reilly, Imam Sami Hussein

told the audience that the leaders of terrorist groups such as ISIS, al-Qaeda, and Boko Haram were selecting passages from the Quran to justify their violence, but he cited numerous passages that point toward peaceful coexistence with those of other faiths.

The leaders of ISIS, which seeks to establish an Islamic state across Syria and Iraq that would have hegemony over all of Islam, "say that anyone who disagrees with them are disbelievers, and that they have the right to kill them," said Hussein. "So they are targeting Muslims and non-Muslims alike."

Yet, Imam Shaheed Muhammed bizarrely claimed "the term Islamic extremists (emphasis his) is a contradiction in terms." 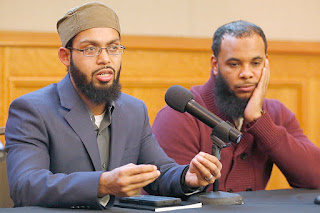 Oh my, I don't think so, as Muhammed inadvertently and unconsciously acknowledged when he noted in closing remarks "no one has demanded from Christians that they stand up and eradicate their extremists." There are both Christian and Islamic extremists, only the latter more menacing.

Christians, as Jeffrey Tayler has often pointed out, are quite capable themselves of committing terrorist acts.  Apparent mass murderer Robert Lewis Dear, whom an ex-wife characterized as an "extremely evangelistic" Christian, has attempted to justify his deadly attack on a Planned Parenthood facility by bragging "I'm a warrior for the babies." That  does not suggest "terrorism doesn't have a religion," a claim of Muhammed, but rather that religion is sadly vulnerable to fanatical interpretation.

Dear hardly acted as Jesus would have, and President Obama and similarly-minded politicians have noted that Muslim terrorists distort Islamic teaching. Terrorists motivated by religion, as folks like Tayler, Sam Harris, and Bill Maher understand, have taken their religious beliefs to murderous extremes.  Yet, they have acted, illegally and catastrophically, on the basis of a belief system held by many other individuals. It shouldn't be surprising that your Muslim neighbor has her particular take on Islam nor that your other neighbor, a Protestant, interprets her religion differently than does your Catholic neighbor... or even than your other Protestant neighbor.  The consequences of deviating from mainstream Islamic teaching are, alas, generally greater than deviating from conventional Christian thought.

For various reasons, the terrorist attacks by Islamic extremists typically claim far more victims and are a greater threat to Western, liberal values than extremists motivated by their interpretation of Christianity or those un-motivated by religion.  Though radical and dangerous, the radical interpretation of Islam may not be the prevailing one among Muslims, but is widely held, thus of considerable significance.

Admittedly, the incidents of Islam motivating such terrorists will not decline if Western nations overly restrict the number of Muslims who migrate to their borders, and punitive action against individuals already in their midst will ony strengthen their resolve.   However, these terrorist attacks, ones which threaten the entirety of civilization, will not diminish because of an unwillingness to acknowledge they are committed by violent Muslims motivated by their set of Islamic beliefs.