"It's time we punch Russia in the nose," one of the most judicious GOP presidential candidates asserted last night in Las Vegas. Observed Charlie Pierce: "that was noted Republican moderate John Kasich."

No one, however, does macho even nearly as well as Chris Christie.  The governor was asked "if the U.S. imposed a no-fly zone over Syria and a Russian plane encroached, invaded that no-fly zone, would you be prepared to shoot down that Russian plane and risk war with Russia?" He replied

CHRISTIE: Not only would I be prepared to do it, I would do it. A no-fly zone means a no-fly zone, Wolf. That’s what it means.
(APPLAUSE)

See, maybe — maybe because I’m from New Jersey, I just have this kind of plain language hangup. But I would make very clear — I would not talk to Vladimir Putin. In fact, I would talk to Vladimir Putin a lot. But I’d say to him, “Listen, Mr. President, there’s a no-fly zone in Syria; you fly in, it applies to you.” And yes, we would shoot down the planes of Russian pilots if in fact they were stupid enough to think that this president was the same feckless weakling that the president we have in the Oval Office is right now.

"Feckless weakling?" And they call Donald Trump a fascist.  (Probably neither is a fascist, but no one trumps Chris Christie at the authoritarian thing.)  This is not only great theater, but great humblebrag, with Christie confessing to having a "plain language hangup."

"Well, I think if you’re in favor of World War III, you have your candidate," countered Rand Paul in what Pierce refers to as "a decent body shot." However, Paul then forgot he was running in a Republican primary and added "My goodness, what we want in a leader is someone with judgment, not someone who is so reckless as to stand on the stage and say, 'Yes, I’m jumping up and down; I’m going to shoot down Russian planes.'"

Yes, that is who GOP voters want, and their allies in the defense industry wouldn't mind churning out a few more missiles, either.  However, Paul added

Then the Kentucky Senator used the word "judgment" thrice while trying to gain support among Republican primary voters, whose favorite candidate is Donald J. Trump.  That works about as well as would emphasizing women's autonomy in a speech before National Right to Life.

Christie then employed the literary device of anaphora, using the word "reckless" seven times before huffing and puffing

And if you think that a no-fly zone is a reckless policy, you’re welcome to your opinion. But how is it working so far? As we have 250,000 Syrians murdered, slaughtered; millions running around the world, running for their lives. It’s not working. We need to try something else. And that is not reckless.

That's "reckless" twice more, a clever move for voters who now appear to want Donald Trump as Commander in Chief of the Armed Forces and leader of the Free World.  And no one noticed that if the dictionary is opened to the word "reckless," up pops a reference to threatening to start World War III because "something" must be done. ("Terror takes center stage at Republican debate," read the weirdly ironic caption from the Wall Street Journal on Twitter, photo below.)

If that's a reckless policy, that to the Israelis.  After Turkey shot down a Russian plane over its airspace, a "senior military official" told reporters "the Russian miliary is a new, key player which we are not ignoring. There is a clear boundary here, and they are busy with theirmatters, and we are busy with ours." The Jerusalem Post has reported

When asked if Israel would hypothetically intercept a Russian jet that crossed into its air space, the official said: "Our policy is that we do not attack or down anything that is Russian."

"Russia is not an enemy," he said. "We are trying to avoid tension with the Russians. Both sides wish not to get to a point where two pilots, an Israeli and a Russian, will meet in the air and will be unsure of what to do. We are not going near the aerial zone in which they are operating, and they don't come close to where we are operating."

"This region is made up of common boundaries, and there are a lot of players on the ground and in the air," the official said. "If a Russian plane crosses the aerial boundary, we will not launch a missile and we won't down it."

There is no word on whether Chris Christie believes Tel Aviv is "reckless" or at least a "feckless weakling." There is, alas, also no way of predicting with certainty Moscow's response if it were to violate a no-fly zone announced by the USA. Engaged in Syria primarily to prop up Bashar al-Assad, Russia's air war is directed against rebel groups, the most powerful of which is  ISIL.  Action taken against Russia, therefore, would have the unintended- but predictable- effect of strengthening ISIL which Christie (as well as others in the Republican field) argue President Obama has been feckless in fighting.

Rand Paul cannot present the red meat to the Republican voters that the likes of Chris Christie, Ted Cruz, or Carly Fiorina can.  Nonetheless, "as a debate that touched on almost every overseas military adventure that the United States has taken in the past 25 years," Charlie Pierce concludes," it is an argument worth having, in both parties. " 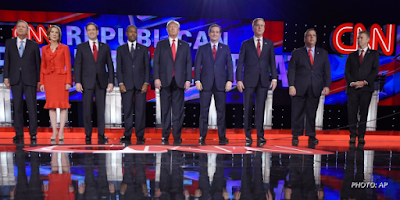