"There is nothing partisan about accurately describing Donald Trump as a racist," Buzzfeed editorial director Ben Smith concludes in his memo (below) to staff. Therefore, he reasons

it is, for instance, entirely fair to call him a mendacious racist, as the politics team and others here have reported clearly and aggressively. He's out there saying things that are false, and running an overtly anti-Muslim campaign. Buzzfeed New's reportingis rooted in facts, not opinion; these are facts. 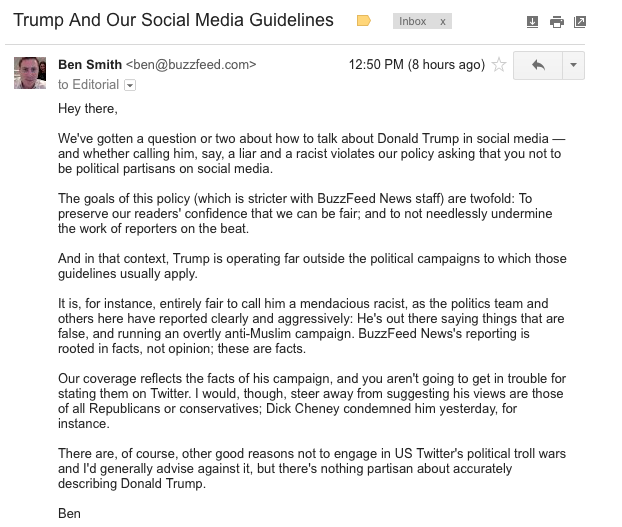 Give Smith credit for prioritizing accuracy (a news report below) over vacuous bipartisanship or even the elusive "fairness," claimed in the slogan of a news network which is anything but.   Donald Trump is a liar, which news organizations, out of a sense of intimidation or of the necessity to say equally banal things about each candidate, are neglecting to admit.

Nonetheless, Donald Trump is not a racist- at least not that we know of. Running an an overtly anti-Muslim campaign, making hostile remarks about Muslims, or even discriminating against Muslims is not proof, or even evidence of, racism.

Racism is about race. It shouldn't be necessary to mention this, but apparently is.  In an otherwise sound and sensible speech Sunday evening, President Obama himself stated "groups like ISIL are thugs and killers (who) account for a tiny fraction of more than a billion Muslims around the world- including millions of patriotic Muslim Americans who reject their hateful  ideology."   Moreover, he maintained "it's our responsibility to reject proposals that Muslim Americans should somehow be treated differently... Muslim Americans are our friends and our neighbors, our co-workers, our sports heroes..."

So three times the President of the United States mistakenly referred to people united by religion as an ethinic group. Three times he conflated religion and ethnicity, an appalling error (and therefore one ignored by Republicans).   It shouldn't be difficult; Muslims are individuals who identify with Islam while Arab-Americans refer to individuals of an ethnic group, most but not all of whom are Muslim.

If "Muslim-Americans" should become part of the lexicon, we need to start referring to "Catholic-Americans" and "Protestant-Americans." We won't, however, because Catholicism and Protestantism are different religions or, arguably more accurately, sects of the same religion, Christianity. We understand that Christians who are citizens of the USA can be categorized as Polish-American, Italian-American, German-American, Haitian-American, Arab-American and on and on and on.

As Steve M. points out, the President spoke to the American people as if we were adults which, as expected, did not sit well with Republicans. Knowledgeable, as well as extremely careful with his language, Obama very likely knew his terminology was false and misleading. It will be of little significance, however, if media outlets understand that hostility toward an ethnic group does not constitute "racism."