Executive Director of Christianity Today Andy Crouch concludes his piece "the victims of the shootings in San Bernardino, and all those who were caught up in the violence and live this very moment in its awful continuing reality and consequences, and also those who perpetrated the violence, are in our thoughts and prayers." He argues

To insist that people should act instead of pray, or that we should act without praying, is idolatry, substituting the creature for the Creator. It insinuates that goodness can be known, possessed, or done apart from relationship with the only One who is truly good. While our neighbors who do not share our faith will not agree, for people with biblical faith this prideful declaration of independence is idolatry, the original sin of humanity, and the ultimate source of the evil in the world and in our own hearts.

There may be debate on the nature of "goodness" or its criteria, but 11,000 gun-related homicides a year certainly would not qualify for goodness. When Connecticut senator Chris Murphy (AP photo/Manuel Balce Ceneta) tweets "Your 'thoughts' should be about steps to take to stop this carnage. Your 'prayers' should be for forgiveness if you do nothing- again," his words appy to both mass shootings, which are well publicized, and everyday murder in homes and on the streets, which would be far less common if gun safety weren't neglected by the GOP. 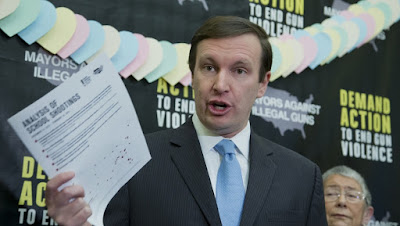 Senator Murphy (after the Sandy Hook did not suggest we should act without praying.  A couple of days after the San Bernardino murders, he told Think Progress "Having lived through the Sandy Hook experience, I know that thoughts and prayers are important. We appreciated them from every corner of the globe.”

But Murphy emphasized that neither praying in public nor indicating an intention to do so, as was the instant reaction of several Republicans (including some presidential candidates), is what we elect individuals to Congress to do.  Cursory tweets are not what Jesus had in mind when he warned "But when you pray, go into your room and shut the door and pray to your Father who is in secret. And your Father who sees in secret will reward you."

"Prayer," Murphy told Think Progress, "is an insufficient response from elected officials today.  You get elected to Congress not to send your sympathy tweets, but to pass laws to keep people safer.” It's a sentiment which would have been understood by James (whose words orthodox Christians believe were inspired by God) when he argued "faith by itself, if it does not have works, is dead."

Murphy wasn't alone in calling out hypocrisy, and he and others were accused of "prayer shaming." However, Steve M., recognizing the GOP tweets all sounded about the same, realizes

if someone in the GOP consultant class has advised you that "thoughts and prayers" is the response to a mass shooting that tests well in focus groups of swing voters and you go out and post that, then, sorry, you're a phony, and I'm insulting you as a politician, not as a Christian, if I call you on your phoniness.

.... how can God hold us accountable for a sin we did not personally commit? There is a plausible interpretation that we become responsible for original sin when we choose to accept, and act according to, our sinful nature. There comes a point in our lives when we become aware of our own sinfulness. At that point we should reject the sinful nature and repent of it.

"Thou shalt not murder/kill" (interpretations vary), reads one commandment.  "God helps those who help themselves" goes the old adage (repeated in a completely unrelated 1970s-era song, below).  The right has chosen to avoid, even deride, modest and popular measures which would bring down the number of gun deaths in the USA. (All four GOP presidential candidates now in the Senate voted against the proposals the day after the carnage in San Bernardino.) Extremely violent behavior is a sin, but repentance is never on the Republican dance card.