In an article posted at 4:48 p.m. eastern on Tuesday  December 1, Slate legal correspondent Dahlia Lithwick quoted Harry Reid noting "whipping people into a frenzy of hate and anger while providing them with easy access to firearms has proven disastrous to our country."

"Of course," Lithwick added, "none of the Republicans who have made claims about the baby killers at Planned Parenthood have accepted even a filament of responsibility for the Colorado killings, or for the other five attacks on Planned Parenthood clinics since July, when the first sting videos were released."

Recognizing the effect of easy access to firearms and of the ongoing GOP effort to block gun safety, Lithwick went on to say- on Tuesday afternoon

Gun policy couldn’t possibly be to to blame, either, because it’s never to blame. And that means that the president will say “enough is enough” once again in a few days, when the next mass shooting occurs.

That's so prescient as almost to be creepy. Perspective, however, is harder to come by the closer one is to a problem, so across the pond (a terrible cliche, admittedly) the BBC opened its coverage of the San Bernardino mass shooting (video below) as “Just another day in the United States of America, another day of gunfire, panic, and fear.” Another day of exceptionalism, indeed.


With 4.4% of the world's population, the USA has almost half the civilian-owned firearms, one reason we have had 351 mass shootings in the past 335 days and 1,040 since 27 people were murdered at Sandy Hook Elementary School in December, 2012.  Following one of those crimes (click here to Vox to find out which one), President Obama pointed out "This is a political choice that we make to allow this to happen every few months in America," an observation which could be mde almost daily.

It appears the perpetrators of the latest act of mass violence were Muslims. If nothing else, that assures the attack- and its victims- will get the attention denied to the terrorist act prompting Lithwick's piece. Whether or not it fits the facts, foreign-based terrorism will be the focus of rhetoric while proliferation of  firearms will be ignored as usual.

On Thursday, Senator Dianne Feinstein offered an amendment (which would have required 60 votes to prevail) to the budget bill. It would at least conditionally have prohibited individuals on the terrorism watch list from buying a firearm or explosives.  It gained 45 votes, one of them a Republican, while 53 Republicans and one Democrat voted against it.

Republicans this past week have offered their prayers and only apathy about a) guns and b) terrorism. Meanwhile, Friday morning's New York Daily News (below) calls them out, as has Democratic Senator Chris Murphy of Connecticut in his tweet :  "Your 'thoughts' should be about steps to take to stop this carnage. Your 'prayers' should be for forgiveness if you do nothing- again." 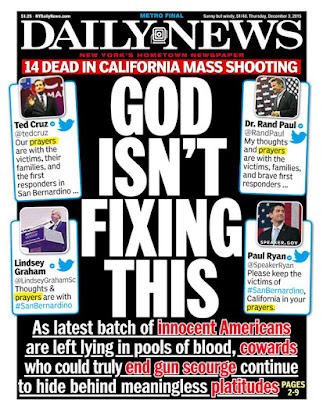