Of course they "pounced," as one writer put it.

"They" would be Chris Christie,who claimed on ABC's This Week with George Stephanopoulos "Mrs. Clinton is Mrs. happy Talk, and she just wants to happy-talk her way to the presidency. She is a personification of this Administration: Are you going to believe me or your lying eyes."

Accused of being warm and fuzzy, Mrs. Clinton may have been confused with Mr. Clinton by the guy who  has said

We have people across this country who are scared to death. Because I could tell you this, as a former federal prosecutor, if a center for the developmentally disabled in San Bernardino, California, is now a target for terrorists, that means everywhere in America is a target for these terrorists.

Scared to death! At least Christie's claim of Clinton's "happy talk" is not as bizarre as Carly Fiorina- Carly Fiorina!- saying Clinton will “lie as long as you (sic) can get away with it."

Seeking relevance, John Ellis Bush tweeted "No @HillaryClinton. We are not ‘where we need to be’ in fight against ISIS.”

Not surprisingly, the GOP candidates had nothing negative to say about the dangerous policy Hillary Clinton laid out in debate  (AP photo via Salon, below) Saturday for the current Mideast crisis.  "I have a plan," the Democratic front-runner started out rationally:

I have a plan that I've put forward to go after ISIS. Not to contain them, but to defeat them. And it has three parts. First, to go after them and deprive them of the territory they occcupy now in both Syria and Iraq. Secondly, to go after and dismantle their global network of terrorism. And Thirdly, to do more to keep us safe.

Having been awake and conscious the last thirteen years, Bernie Sanders responded

Yes, we could get rid of Saddam Hussein, but that destabilized the entire region. Yes, we could get rid of Gadhafi, a terrible dictator, but that created a vacuum for ISIS. Yes, we could get rid of Assad tomorrow, but that would create another political vacuum that would benefit ISIS. So I think, yeah, regime change is easy, getting rid of dictators is easy. But before you do that, you've got to think about what happens the day after. And in my view, what we need to do is put together broad coalitions to understand that we're not going to have a political vacuum filled by terrorists, that, in fact, we are going to move steadily -- and maybe slowly -- toward democratic societies, in terms of Assad, a terrible dictator. But I think in Syria the primary focus now must be on destroying ISIS and working over the years to get rid of Assad. That's the secondary issue.

There is time, arguably not the ability, to overthrow the regime in Damascus.  For now, we can learn from World War II in Europe, when the USA and the Soviet Union were allies despite Joseph Stalin. If the Soviets did not join the fight against the Third Reich, it is unlikely that Nazi Germany would have been defeated and the horrors pressed against Europe (and perhaps beyond) by Adolph Hitler would have far surpassed the evil visited upon eastern Europe by the communist regime. First things, first.

The USA need not ally itself with Russia, which whatever its motives (self-interest, no doubt) is undermining ISIL, the rebel group most likely to enter Damascus triumphant is Assad is soon deposed.  Exceptional or not, the USA cannot simultaneously defeat ISIL and overthrow Bashir Assad.  Aside from threatening World War III, a no-fly zone would undermine the Russian campaign against the most brutal terrorist group in the world today." If you hamper the war effort of one side," George Orwell once wrote, "you automatically help that of the other." That Bernie Sanders and Rand Paul are nearly alone among major presidential candidates who understand that is worrisome. 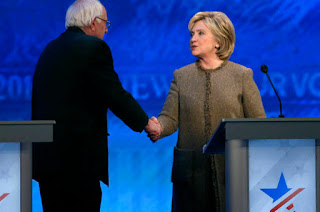