Nothing Less, Nor More, Than Terrorism.


Because Wednesday is a day ending in a "y," there has been another mass shooting, and probable case of terrorism, in the USA. (Photo below by Think Progress' Alex Zielinski is of Dr. Nina Agrawal calling just prior to San Bernardino shooting for a resumption of firearms research). 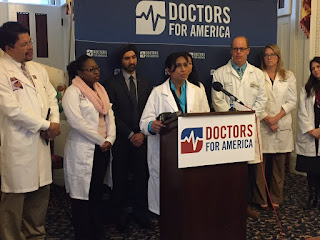 There may be a logical reason not to bandy about the term "terrorism" or the more-encompassing and misleading "terror."  (What we now think of  as "bullying" or continual, extended harasssment previously was accurately referred to as "terror.")

But if there is a logical reason, it evades Jack Mirkinson when he writes

If “terrorism” were an ideologically neutral and dispassionate term, I doubt I would have any trouble with the push to widen its use. But the notion of terrorism is not deployed in a vacuum, as anybody who has lived through the so-called “war on terror” knows all too well. We have now spent the better part of two decades explicitly constructing a world of mass surveillance, indefinite detention, torture and constant war, all in the name of battling terrorism. Terrorism has been used as a cudgel to repress dissent; as an easy way to whip up cheap nationalism; as a brush with which to tar entire communities; as an excuse for ever-wider militarism; and I could go on and on.

We have been constructing a world of mass surveillance, indefinite deterntion, torture and constant war, all in the name of battling terrorism.  However, neither accusing Robert Lewis Dear of domestic terrorism nor even convincing Americans he was a domestic terrorist would expand unconstitutional, unethical, or harmful surveillance, deterntion, torture, or war. Make no mistake about it: accusing Republicans who employ vicious and vile rhetoric against Planned Parenthood would not whip up cheap nationalism or drive one forced-birth advocate into exile like Eric Snowden. And I could go on and on.

Chris Hayes is thinking a little clearer when he argues

I think there`s an impulse to label things domestic terrorism as a means of saying this is an act of political violence and it`s important, important and we should marshal the kind of concern over it that we marshal over, say, the Boston Marathon bombing, right? Which, let`s be clear, killed less people. Fewer people.

But it also strikes me that going -- calling lots of things terrorism is not really a long-run political solution to any of the kind of violence we face, and in fact, lots of things we label terrorism we don`t go about combating in a particularly useful way.

It is not alone the solution. Nonetheless, being necessary though not sufficient, it is a step in the right (or, rather, left) direction.  Hayes would be more convincing if he- and many of our fellow progressives- didn't believe labeling something "racist" were part of the solution to ending racial discrimination. Or if conservatives didn't believe they could block change by labeling the estate tax upon the extremely wealthy as the "death tax," comprehensive immigration reform as "amnesty," a fetus as a "baby," or reproductive freedom as "murder."  However, they do believe it, and generally have been successful.

Most Americans don't think of any mass murder committed by non-Muslims as any sort of terrorism. Until they do, the nation will not marshall the necessary resources to counteract it. Moreover, referring to such acts as domestic terrorism is simply accurate. Just as an intimidated Hillary Clinton refusing to recognize immigrants who have entered the country illegally as "illegal immigrants" will not magically transform the individuals into citizens, so will a refusal to use the term "domestic terrorism" fail to end terrorism.  Phenomena, whether illegal immigration or terrorism, should be characterized as they are.

It would be more effective still if we did not label it "domestic terrorism." It is terrorism, period. Terrorism.