Ridicule In Place Of Criticism


An organization supportive of the David Horowitz Freedom Center reports

Analyzing hundreds of examples from the past decade, the center asserts that "there are organizations on American campuses that support the agendas of terrorists groups [Hamas, al-Qaida and Islamic State] and spread their propaganda and lies with the financial and institutional support of university administrations."

The report names the Muslim Students Association and Students for Justice in Palestine, both established by members of the Muslim Brotherhood, as examples for organizations that sponsor annual campus events such as "Israeli apartheid week," during which "they lead chants calling for the destruction of the Jewish state 'from the river to the sea.' They are the chief sponsors of the boycott, divestment and sanctions campaign, inspired by Hamas, whose goal is the economic strangulation of the Jewish state."

Moreover, "These terrorist-supported organizations are afforded campus privileges, including university offices and the right to hold events on campus grounds that would be denied to any other group preaching the hatred of ethnic groups or supporting barbaric terrorists, who slaughter men, women and children as part of a demented mission to cleanse the earth of infidels," David Horowitz, who founded the nonprofit Freedom Center in 1989, said in a press release.

Given that the report comes from the staunchly conservative David Horowitz, it should be suspect. On the progressive Alicublog, Roy Edroso responds (emphasis his)

Harvard? Columbia? Brandeis? This item, from Isreal Hayom, has the Center claiming that student orgs like the Muslim Students Association and Students for Justice in Palestine "lead chants calling for the destruction of the Jewish state 'from the river to the sea.'" ElsewhereHorowitz himself explains that what they actually chant is, "From the river to the sea, Palestine will be free," but, he adds, "the river is the Jordan and the sea is the Mediterranean. Those are the east and west boundaries of the state of Israel. So what they’re really chanting is 'Death to Israel.'" Freedom for the Palestinians means death to Israel? Well, no wonder they're pissed.

I have said this many, many times over the years to people who yap about campus radicals, and I will say it again: If you think Harvard and Columbia are too radical for you, please remember that there are in this great nation plenty of Bible colleges at which your son or daughter will never hear a "radical" idea, and the prices are reasonable. (I know Horowitz is Jewish, but that should be no impediment, as evangelicals respect their Jewish brothers as providers of the on-ramp for the apocalypse.)

A squeamish (to be generous) Edroso has chosen not to note that Brandeis (photo from this site) traditionally is attended by many Jews, which he evidently thought important enough to put into italics. He chooses, additionally, not to explain what he thinks "from the river to the sea, Palestine will be free" means to the activists chanting it, probably because it is quite clear what is meant: no more Israel as we know it, as the United Nations in 1948 intended it to be.

It is unclear to what extent Horowitz's charges, including that terrorist-funded organizations are afforded extraordinary campus privileges, are accurate, given that Edroso prefers not  to challenge the claims. Instead, he suggests that if the likes of Harvard and Columbia "are too radical for you," you ought to go to Bible colleges.

In a society in which the importance of merit often is eclipsed by other, more subjective factors, attendance at an Ivy League college should be available to deserving men and women, notwithstanding their political views- or lack thereof.  If potential students are not hostile to the existence of Israel as a Jewish state, they should not be relegated to "Bible colleges," though Edroso deserves points for laying bare his animosity toward religion.

If Edroso's vile attitude were to hold sway, perhaps we can extend it to other groups. Offended by racism on campus?  Edroso presumably would want you to know there are several fine, traditionally black colleges. Frightened by misogyny at your college of choice? There still are women's colleges you may attend.

If you don't like the bias here, get out, Edroso implies. A few decades ago, before hatred of the USA became chic on the American right, there was a similar recommendation: "America, love it or leave it." If David Horowitz has his facts wrong, his critics have the opportunity to demonstrate that. Otherwise, there is a problem on American campuses that ridicule serves only to highlight. 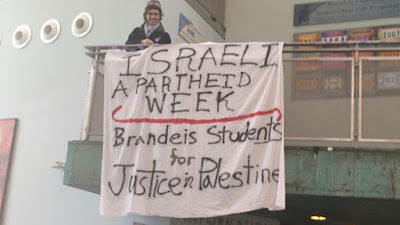