In an article originally appearing elsewhere but on February 9 in Salon, law school administrators Erwin Chemirinsky and Howard Gillman defend the University of California-Berkeley against charges it denied Milo Yiannopopulos freedom of speech when his appearance there was cancelled on February 1, 2016.

The highly controversial and stridently right-wing opportunist Yiannopoulos had been invited by the college's Young Republicans.  However, his appearance sparked a black Bloc outburst of approximately 1500 individuals, roughly 10% of whom wore black masks and other black garb, in some cases throwing fireworks and rocks at police and Molotove coctails which resulted in fires.

Berkeley ultimately had little choice but to cancel the event in consideration of the safety and security of everyone, even though it had, as Chemerinsky and Gillman note, employed "extensive security arrangements, including bringing in dozens of police officers from nine other UC campuses."

The university's effort to uphold the principle of free expression did not impress President Trump, who early the following morning irresponsibly tweeeted (capitalization his, of course) "If U.C. Berkeley does not allow free speech and practices violence on innocent people with a different point of view- NO FEDERAL FUNDS?"


If you thought the tweet was hypocritical, you've been paying attention; surprising, you have not been.

On July 11, 2016 Politico had reported that earlier that day Donald Trump had

bestowed another moniker upon himself:  "the law and order candidate."

In an issues paper appearing shortly after taking office, the President struck the same tone, and with the same language. "The Trump Administration," it went, "will be a law and order administration (which) wll honor our men and women in uniform and will support their mission of protecting the public."

There was no mention of the "men and women in uniform" nor of "protecting the public" in Trump's response to the organized mayhem at Berkeley.

Nor was there any mention of the "law and order" George Corley Wallace and Richard Milhous Nixon had effectively invoked in campaigns long past and which Trump had reclaimed in his run for office. That was no coincidence because Trump's rhetoric of, and expressed concern for, law and order always has been a sham.

His outrage was belied, obviously, by the dozens of lawsuits pending against Mr. Trump, the dalliance as a real estate mogul with La Cosa Nostra, and his involvement in a myriad of financial deals sure to enhance his personal and family wealth while he is President.

Trump's rantings about law and order always have been both strategically motivated and a disturbing reflection of his character.  Among other indications, racial discrimination appears to have been a hallmark of his business career. He condoned the beating at one of his rallies of a Black Lives Matter protestor, is comfortable with the support of white supremacists, and stereotypes "the blacks," sometimes treating them as tokens,  There are other signs and your mileage may vary.

Yet, perhaps the most dangerous manifestation of Trump's racial hostility can be found in the image (below, from FactCheck) he tweeted in November of 2015. 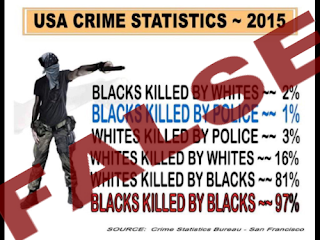 Politifact rated the chart as "pants on fire" and explained

None of the numbers are supported by official sources. The figures on black-on-white homicides and white-on-white homicides are wildly inaccurate. And, as several news organizations quickly noted, the "Crime Statistics Bureau" doesn’t exist. We looked for that agency as well and the closest we found in San Francisco were a number of crime scene clean-up services...

The most glaring inaccuracies have to do with white homicide victims. Trump cast blacks as the primary killers of whites, but the exact opposite is true. By overwhelming percentages, whites tend to kill other whites. Similarly, blacks tend to kill other blacks. These trends have been observed for decades.

The grotesquely inaccurate and deceptive statistics Trump relayed inspire generalized fear by encouraging the misleading impression that violence is perpetrated by strangers, rather than acquaintances. Further (and more obviously), they prompt whites to distrust and even fear (in fewer cases to dislike) blacks.

For Donald Trump, law and order is, as it was for George Wallace and Richard Nixon, more than a slogan. It represents a bulwark against disruption of the social order by undesirables- liberals, the media, immigrants, and especially blacks, a useful slogan for a bitter and hateful authoritarian.